The remote College valley in Northumberland National Park famously restricts car use: the valley’s two asphalt roads are privately owned and those who wish to get about by motorised means have to apply for day permits, at £10 a car. Only 12 permits are issued in any one day. The valley is freely accessible to walkers and cyclists. With so few cars knocking about, it’s a blissful place to be.

But not quite so blissful yesterday. Yesterday – and this is unheard of – there were traffic jams in the College valley. And there were motorists who didn’t feel as though they should slow down when passing walkers or cyclists. For one day, College valley became just like the rest of the UK: motorists felt like they owned the place and many drove with the same sort of abandon that’s criminal but is rarely considered so. 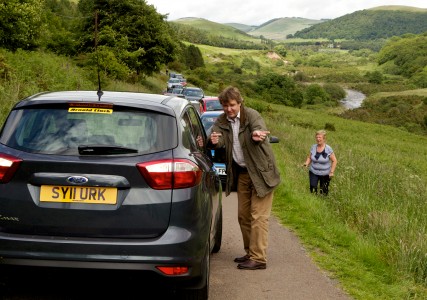 Access to the valley for umpteen cars was all for a good cause. The kindly folks who live (and work) in College valley opened their gardens, and their roads, to all and sundry. The “secret gardens with altitude” day was a means of raising cash for the Great North Air Ambulance, and the chance for hordes of motorists to take to the narrow roads of a usually tranquil valley.

The Reid family parked in the car park field at Hethpool house and used shoe leather instead of petrol. The valley roads are short, the longest is just over three miles long. Very few other visitors chose to walk, despite being warned that traffic delays would be “crazy”. Sure enough, less than a mile from the car park there was a rural snarl-up. There were a few Land Cruiser type vehicles in the mix but most of the trapped cars were standard suburban runabouts. They had trouble passing each other on the narrow slivers of tarmac. Naturally, where there were grass verges these were used, and trashed (the day was wet). 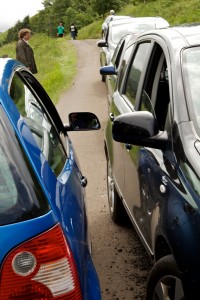 Distances between gardens may have been short but car dependence is now so inbuilt that the majority of people arriving in the valley couldn’t countenance being without their internal combustion engines. The hares got stuck, the tortoises didn’t. It was comical, yet disheartening, to see a traffic jam in the College valley. With a bit of organisation from a few of the stranded motorists, cars gradually became unstuck but once free again, many of the motorists, who had previously felt happy to chat to us as we walked by, adopted a haughty you-shouldn’t-be-on-the-road attitude. Roughly one in four of the motorists chose to pass us at speed, with very little margin for error.

When coming directly at us, I watched the faces of the get-out-of-the-way 25 percenters. They seemed to say something disparaging about us to their passengers as they skimmed past us, with a late flick of the wrist to alter their trajectory ever so slightly. I can’t lip-read but I’d hazard a guess that the comments were along the lines of ‘why aren’t those walkers jumping out of the way?’ 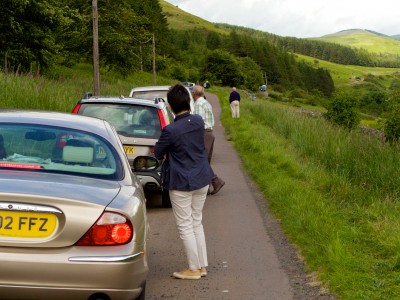 For many motorists, roads are for cars and cars alone. It’s perfectly natural to have to slow down or stop to avoid an approaching car on a narrow road but not at all natural to slow down or stop for flesh and blood. In a civilised society this ought to be seen as an odd attitude, perhaps even a little bit evil. Instead, it’s a normal attitude, and it’s scarily prevalent.

When on my bike, in town, I sometimes have to play ‘chicken’ (otherwise known as ‘claiming the lane’) when approaching build-outs, refuges and chicanes, and find it shocking that a goodly proportion of drivers look right through me and clearly have no intention of slowing down for a mere cyclist even though I may have priority. When did such a superiority complex take hold? Elsewhere I have argued it took hold from the earliest days of motoring, when cars were aristocratic playthings. Such a situation was bad enough back then but, today, with 35 million licensed vehicles on the roads it can often make life hell for those outside many of these vehicles. 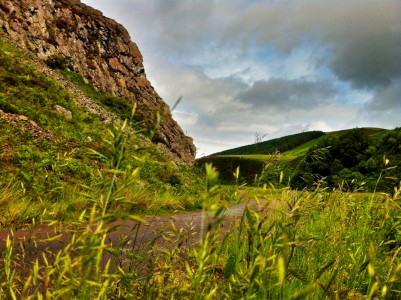 In the late 1890s cars were novelties; in the 1900s there were calls – from all quarters – for car use to be curtailed. MPs, Lords, doctors, judges, JPs and other upstanding members of society ceased such calls as they started to become car owners themselves. Police forces and newspapers largely stopped calling for restrictions when chief constables and newspaper proprietors became car owners. In the 1930s and through into the 1940s, the call for car use to be curtailed became a minority position. Cars are wonderful things; those who drive them often aren’t quite so wonderful.

3 thoughts on “A rural traffic jam, car dependence and a motoring superiority complex”