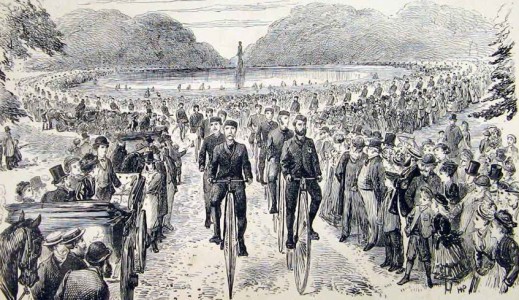 1. Before starting on a long journey, get a few hours’ sleep.

2. Knickerbockers are the best things to ride in, and thick boots are better than thin ones.

3. Bread and milk is one of the best things to take during the journey, being easy of digestion and very nourishing.

4. Before starting on a journey, see that your saddle is quite straight and firmly fixed; if it is crooked you are sure to get sore.

5. Lean well forward up the hills and against the wind; I have done a mile in four minutes by attending to this rule.

6. Lamps are of little use, they rattle, and generally go out when shaken.

7. Never forget to take a spanner and an oil can with you, however short the journey may be. Those who ride “Coventry Spiders” would do well also to take a pair of gas pliers to tighten the lock nuts, should they become loose.

8. The best way to rest during a journey is to lie flat on the floor.

9. If a long ride makes you feel ill the next day, jump on your bicycle and ride a few more miles. “Like cures Like.”

10. Walk up very stiff hills, and don’t try to see how far you can go without dismounting. 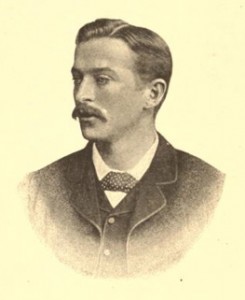 Ion Keith-Falconer (1856-1887) of Edinburgh, was the third son of the 8th Earl of Kintore. While studying at Cambridge University he was vice-president of the university bicycle club. In 1878 he won the National Cyclists’ Union two-mile championship at Stamford Bridge. At the time this was considered the world championships of bicycling.

Keith-Falconer had the money for the best bicycles of the day, and the leisure time to ride long distances. The letter in The Field followed a failed attempt to ride from London to York in less than 24 hours.

While an aristocrat, he seemed to have more generous views than many of his fellows on the “lower orders” being allowed to join cycling clubs. In 1881 he wrote:

“It is an excellent thing to encourage an innocent sport (such as bicycling) which keeps young fellows out of the public-houses, music halls and gambling hells and all the other traps that are ready to catch them. It is a great advantage to enter for a few races in public, and not merely to ride on the road for exercise, because in the former case one has to train oneself and this involves abstinence from beer and wine and tobacco, and early going to bed and early rising, and gets one’s body into a really vigorous, healthy state. As to betting, nearly all Clubs forbid it, strictly… A bicycle race-course is as quiet as a public science lecture.”

In 1883, Keith-Falconer made his second attempt at riding Land’s End to John o’ Groats, a distance of 994 miles which he completed in 13 days.

He kept a diary which appeared in The London Bicycle Club Gazette:

Third day. During the ride through Somerton (171) to Glastonbury (183), I became the victim first of stupidity, then of malice. A waggoner seeing me about to overtake him pulled very suddenly to the wrong side, and sent me sprawling over a heap of flints. No harm done.”

Keith-Falconer was later an Arabic professor at Cambridge and became a missionary. He died of malaria while in Aden.