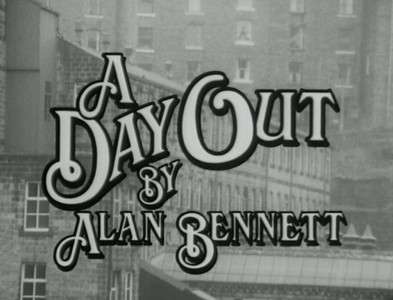 Playwright and Yorkshire-icon Alan Bennett is a national treasure but, 39 years too late, I wish to object to his first televised play.

Of course, A Day Out, set in 1911, filmed in 1972 and shot in black and white, is a classic. It’s wonderfully evocative and beautifully written. But it depicts a cycling club’s outing that is unlikely in the extreme.

The half hour film, directed by Stephen Frears, is about a cycling club’s summer’s day outing from Halifax to Fountains Abbey, three years before the outbreak of the Great War.

I object to the film’s use of roads covered in hard, thick asphalt for the rural scenes: the rural roads of 1911, if surfaced at all, would have been sprayed with tar over a base of small compacted stones. Hard, thick asphalt wasn’t a common road covering until the 1930s. 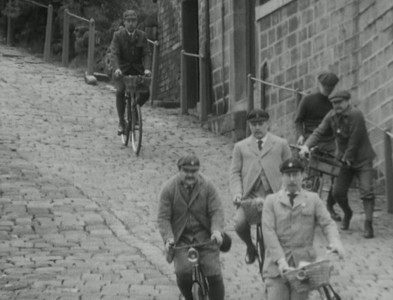 The film is more accurate when it portrays the characters cycling on granite setts, although as A Day Out shows, such a surface was bumpy and not at all liked by cyclists of the time. (Or today).

And I most especially object to the mixing of classes. Club members in the film are shown to be from both middle class and working class backgrounds, an unlikely mixture for the time.

And it’s also highly unlikely that cycling club members in 1911 would be wearing CTC uniforms. The uniform had been officially abandoned by the CTC in 1907, and it hadn’t been worn in great numbers since the mid-1890s. By the turn of the century even the wearing of the CTC badge on a cap had fallen out of use.

In 1878, the uniform of the newly-formed Bicycle Touring Club – forerunner to CTC – was meant to consist of “dark green Devonshire serge jacket, knickerbockers, Stanley helmet with small peak, and Cambridge grey stockings.”

Not all members liked this proposed colour combination. One critic wrote:

“I must say that grey stockings with green uniform will look absolutely hideous. Why not all dark green?”

All dark green was duly adopted and H Goy of Leadenhall Street, London, was appointed the club’s official tailor. However, dark green showed “every spot of dirt” and “looked shabby” so the colour was changed in 1882 to “fast-dyed all-wool grey cloth, washable without injury.”

Not all members liked the fact there was only one uniform. In the mid-1880s a member said:

“even in the CTC, class distinctions existed and no amount of Club feeling will annihilate them.”

The member did not think that “baronets should be called upon to wear the same uniform of bricklayers.”

In the 1880s and 90s this was a irrelevant point. Most cyclists were middle and upper class, bicycles were for the rich. It was only after the end of the Bicycling Boom – at the end of the century – that affordable bicycles came on the secondhand market, toff cast-offs.

Bennett clearly didn’t do his research. But, then again, it’s a great film (it stars Brian Glover, two actors who would later be in Are You Being Served, and Paul Shane who would later star in Hi-De-Hi) and as Bennett is himself a cyclist, all is forgiven.

“You always know when you’re going to arrive. If you go by car, you don’t. Apart from anything else, I prefer cycling. It puts you in a good mood, I find.”

EXTRACT FROM ‘A DAY OUT’: