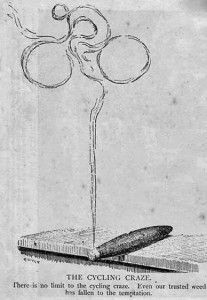 In the late 1890s, Britain’s biggest tobacco company was the main sponsor of a chain of Cyclists’ Chalets. There were plans to build a chain of 500 such chalets, all part sponsored by W.D. & H.O. Wills. Only 40 are reported to have been built. I can’t find any illustrations which show what these chalets would have looked like but they were probably similar to Clarion clubhouses which later dotted the countryside around northern, industrial cities. There’s just one of these clubhouses left, Clarion House, near Clitheroe in Lancashire, built in 1912.

Refreshment rooms for cyclists were all the rage in Victorian England. At Carding Mill, in Shropshire, Mrs. James’s temperance refreshment rooms, of the mid-1880s, catered to middle class riders out for a spin in the countryside on their high wheelers; cyclists were “specially attended to.” Cycling was promoted as a healthy pursuit and the no-alchohol temperance movement, in vogue at the same time as late Victorian cycling, could see the benefits of being aligned with such a pursuit. While booze might have been out, baccy back then was totally fine. In 1898, when W.D. & H.O. Wills was sponsoring Cyclists’ Chalets, there would have been no raised eyebrows about “the cycling craze” being sponsored by “our trusted weed.” 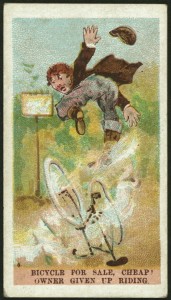 Wills was a vigorous marketeer. In 1887 it was the first UK tobacco company to include advertising cards in packs of cigarettes, and in the 1890s racing cyclists were included in the pantheon of sporting greats portrayed on these advertising cards. Later, general cycling images were used on cigarette cards.

London newspapers in January 1898 reported that the Cyclists’ Chalets Company had ambitious plans:

“500 chalets to be erected on principal cycling routes in the Midlands and the South of England for the use of cyclists who may desire light refreshments and temperance beverages. One chalet placed on the Bath road is said to have proved a great success.”

According to The Automotor Pocket Book of Automotive Formulae and Commercial Intelligence of 1899, the Cyclists’ Chalet Company Ltd. was founded in October 1897 and was registered at 3 Kensington Place, Brislington, Bristol. In his history of Wills, B. W. E. Alford wrote that the Cyclists’ Chalets Company:

“had been founded in response to the enormous popularity of cycling among the middle classes in the late 1890s – incidentally, a fashion eagerly followed by the younger members of the Wills family. The Cyclists’ Company had forty chalets, located in different parts of the country, where members could rest or shelter, and in each of these Wills’ tobaccos and cigarettes were given exclusive display.”

Such sponsorship was pedalling with the zeitgeist. Cycling was used to sell everything, from cotton reels to lime juice cordial.

But tobacco companies were especially attracted to healthful cycling, and latched on to the activity from the very start. The Velocipede tobacco brand was created in 1869, soon after the start of the velocipede craze. Made by the Harris, Beebe & Co of Quincy, Illinois, Velocipede was a chewing tobacco. (Harris had a contract during the American Civil war, 1861-1865, to supply the Union army with tobacco). This advert was created in 1874. 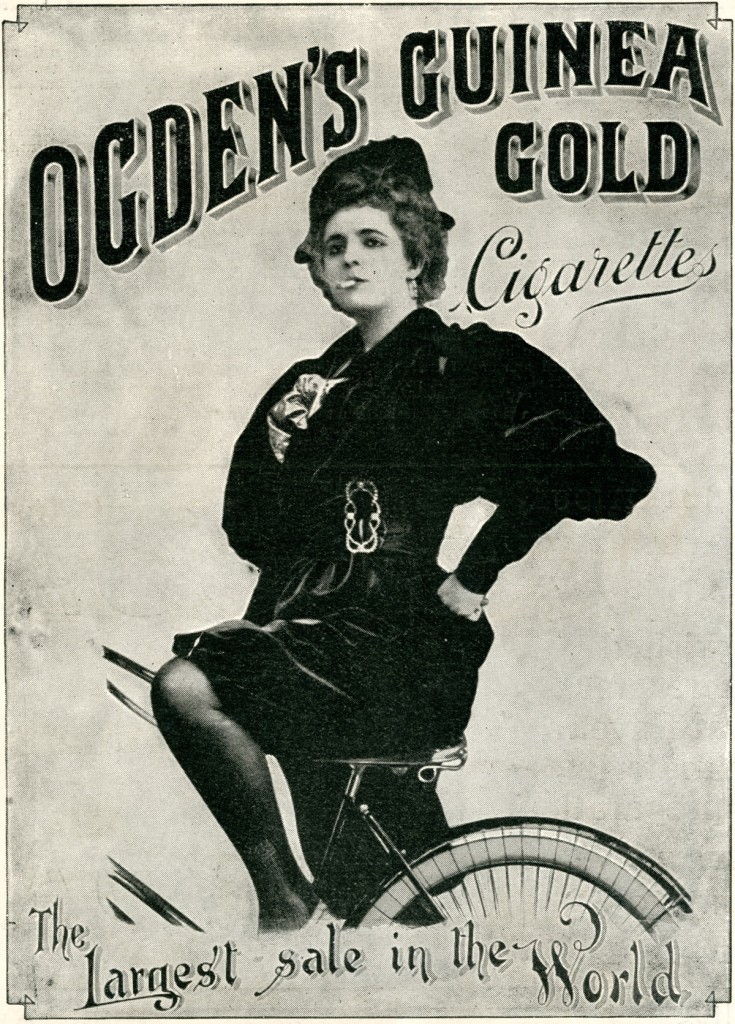 Ogden’s Guinea Gold is here targeting the ‘New Woman’ of the Victorian era, who sought independence and freedom, awheel as well as in life in general. In Paris, an 1898 novel by Emile Zola, the character Pierre, a former priest, now a convert to cycling, asks, “So women are to be emancipated by cycling?” and Marie responds:

“Well why not? It may seem a droll idea; but see what progress has been made already! By wearing rationals women free their limbs from prison; then the facilities which cycling affords people for going out together tend to greater intercourse and equality between the sexes; the wife and the children can follow the husband everywhere, and friends like ourselves are at liberty to roam hither and thither without astonishing anybody. In this lies the greatest advantage of all, one takes a bath of air and sunshine, one goes back to nature, to the earth, our common mother, from whom one derives fresh strength and gaiety of heart! Just look how delightful this forest is. And how healthy the breeze that inflates our lungs! Yes, it all purifies, calms, and encourages one.’”

Cycling is still healthy but smoking very much isn’t. Not that tobacco companies have ever wanted to stress this harm. Far from it. Smoking wasn’t just portrayed as healthy, it was also shown as being sexy. In France, the cigarette cards of the 1890s were, ahem, a little racier than those produced in England: 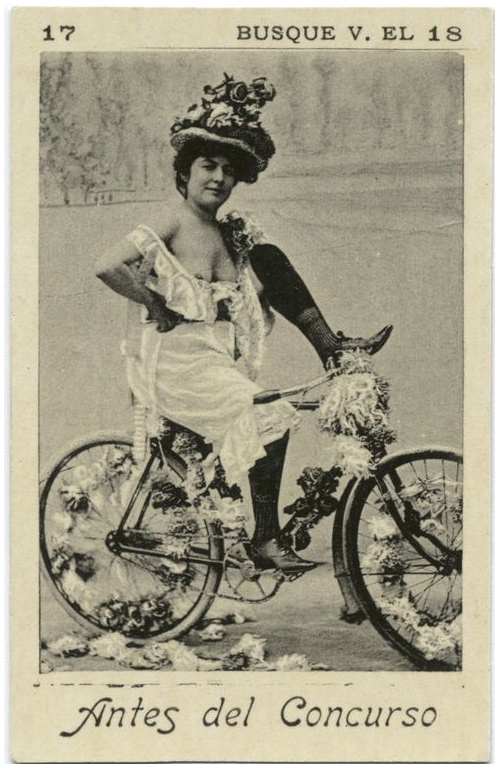