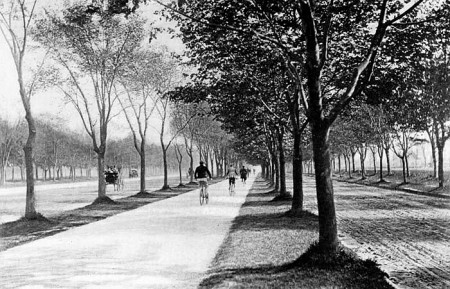 The following is from A Treatise on Roads and Pavements of 1903 by Ira Osborn Baker, Professor of Civil Engineering at the University of Illinois.

A bicycle in the eyes of the law is a vehicle and is entitled to travel upon the public highways subject to similar rights of other travelers; and the bicycle has come into such general use that a reasonable provision for this class of traffic should receive the careful consideration of all officials charged with the care of public highways.

It is frequently claimed that the bicycles outnumber other vehicles six to one; but this can be hardly true for the whole country, although it may be true in the cities. It is certainly true that the use of the wheel has extended to every profession and occupation in life, and that the bicycle has become a familiar object in every civilized land. The great number of men and women who use the bicycle as a conveyance both for business and for pleasure are rightly entitled to be placed upon an equal footing with pedestrians who use the sidewalks and with those who ride in other vehicles upon the carriage ways.

CITY BICYCLE WAYS
The wheel being recognized as a proper conveyance and as entitled to the use of the street under reasonable restrictions, the question arises as to what portion of the street the wheelman shall use and whether any special construction is required for their accommodation.

In business districts and in residence districts having fairly smooth pavements [i.e. road surfaces], it seems reasonable to confine the bicycle traffic to the carriage way; but on residence streets where the pedestrian travel is light and the carriage way is not surfaced with a material which is suitable for bicycle travel, the wheelmen should be permitted to use the sidewalks under proper rules regulating the speed, particularly in meeting and passing pedestrians.

However, there are main avenues of travel to the business district and to parks, ball grounds, summer resorts, etc., where neither the carriage ways nor the sidewalks afford reasonable facilities for the wheelman and where the volume of bicycle travel for both business and pleasure is sufficient to require a special construction for its proper accommodation. Some cities lay smooth pavements on leading thoroughfares for the accommodation of wheelmen, while others construct special cycle ways on unpaved streets, and sometimes at the sides of paved streets having a dense vehicular traffic. In some cases special cycle ways are constructed at the expense of the city and in other cases by private contributions of wheelmen.

Where there is any considerable amount of bicycle traffic, it is true economy to set apart a certain portion of the street for the use of the wheelmen, since the traffic can not, with safety to pedestrians, be accommodated upon the sidewalks, and since it is much cheaper to construct a pavement suitable for a cycle carrying 100 pounds on a rubber tire than to construct a pavement for a truck concentrating perhaps 2,000 pounds upon a steel-tire. Further, cycle ways are much cheaper to construct than sidewalks, often costing one fourth or one fifth as much.

LOCATION
Some cities have allotted a strip in the middle of the street for the use of wheelmen, but the result has not been satisfactory owing to the difficulty of keeping teamsters [i.e. horse-drawn delivery vehicles] from trespassing thereon. The cycle way should be either on the edge of the roadway next to the curb, or in the parking between the curb and the shade trees, the former probably being the better on an unpaved street and the latter on a paved street.

WIDTH
The width should depend upon the amount of cycle traffic, and varies from 3 to 16 feet, but is seldom less than 4 feet for city paths. One wheel can pass another at speed on a 4-foot path, but not safely upon a narrower path. 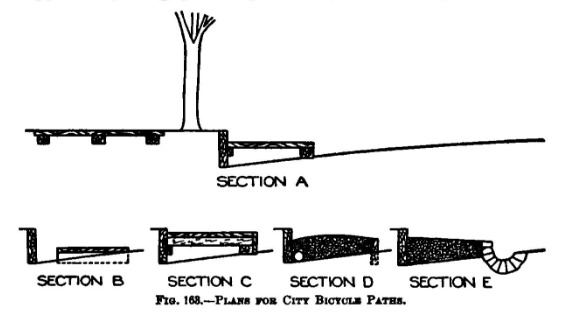 Fig. 163 shows five plans that have been used in constructing city cycle ways. Plans A, B, and C are constructed of wood; and D and E are constructed of gravel or broken stone. The curb on the right-hand side of Plan D is supported by being spiked to posts firmly set into the ground. 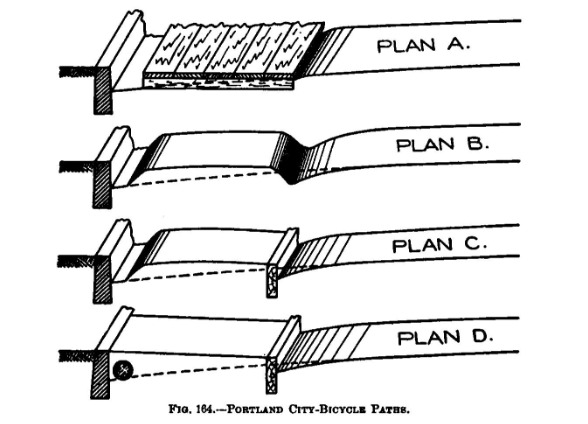 Fig, 164, shows the four standard forms of cycle ways employed by the City of Portland, Oregon.

COST
The cost of a city cycle way will vary greatly with the style of construction, the cost of materials and labor, etc. The following examples are of interest,

In St. Paul, Minn., in 1897, about 12 miles of cycle ways were built, the cost and the method of construction being as follows: A cycle way 10 feet wide consisting of 4 inches of coal cinders at the center and 2 inches at the side, and covered with a 1-inch layer of sand and loam or clay mixed, having a crown of 4 inches, with broken-stone street crossings, built where the only grading consisted in removing the sod, cost $500 per mile…A 3-foot cinder path along a graded street cost $165 per mile. 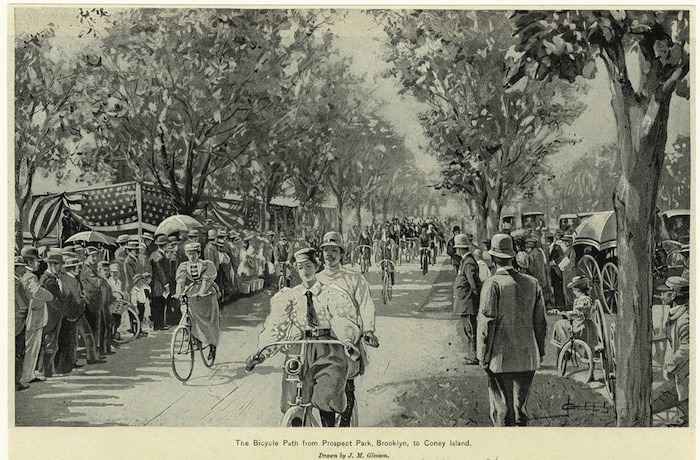 At Rochester, N. Y., a 16-foot cycle way having a 4-inch limestone base and a 2-inch trap top, cost practically $10,000 per mile, exclusive of engineering and inspection…

COUNTRY BICYCLE PATHS
As a rule, country cycle paths are chiefly for pleasure riding, and the money available for their construction is limited; and consequently the severest economy must be employed. A country cycle path may be anything from a narrow strip of turf worn smooth by the passage of wheels or pedestrians to a broad and carefully constructed roadway.

WIDTH
Length is more important than width, and consequently the path should be made no wider than is necessary to accommodate the travel. A cyclist touring alone, or several riding in single file, may ride swiftly and comfortably on a path only 10 or 12 inches wide. Unless the travel is considerable, a width from 3 to 4 feet is abundant. One rider can safely pass another at speed upon a path 4 feet wide.