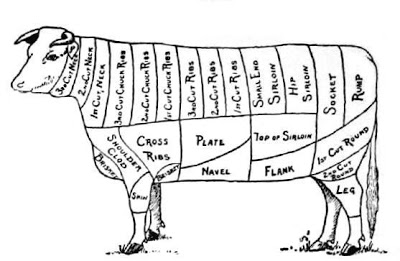 “Cycling as a ‘sport’ is exhausted and ceases to attract, for the simple reason that a bent-backed man clothed in curious garb running round and round on a track is not of itself an exciting thing, neither does it prove anything of use. It moreover encourages a low class of gambling.

“Still, those who are interested in promoting ‘contests’ — races, records, and other childish delights, dear to the heart of the average cyclist, cannot afford to see their ‘sport,’ as they call it, languish, and so they have hit upon a novel and distinctly elevating source of attraction, viz., the slaughtering of live oxen in the ‘grounds.’ Thus, at a recent cycle meet at Wood Green, two professional gentlemen, Messrs. Paul Tetzel, of Chicago, and Edward Harper, of London, competed for the international beef-dressing championship and £400. Over 2,000 spectators witnessed the contest. The American proved the winner, dressing a couple of bullocks, fit to be placed on the market, in 18 m. 33 s. Harper occupied 22 m. 22 s. to do the same amount of work. We shall now have to keep note of our kindred sport of beef-dressing. This exhilarating pastime, says the Scottish Wheel, can be cordially recommended to the notice of our cycling clubs who wish to introduce novel features into their club fixtures.

“It is, however, satisfactory to note that this disgusting, brutalising, and outrageous spectacle is not likely to be related, as it is in itself illegal. But to think that at the end of this nineteenth century such an exhibition should be possible in order to attract visitors to a cycle show is in itself striking evidence of the innate brutality of the mob. We wax virtuously indignant at the horrors of the Spanish bull ring and the callousness of the Latin people to animal suffering, but are these latter any worse than those ‘2,000 spectators’ at Wood Green who witnessed the slaughtering contest?”