The cyclists of the 1890s were a pushy lot, demanding better roads on which to ride their “wheels” (this was the US term for bicycles, hence League of American Wheelmen) and they were also an inventive bunch.

While refinements such as the quick-release binder bolt and derailleur gears were the work of the early to mid 20th Century, most of the key bicycle innovations had been invented by 1899.

In the ten years before 1900, a third of all new patent applications at the US Patent Office were bicycle-related.

According to 19th Century US trade magazine Cycling Life the situation was similar in Britain:

“Of 28,000 applications for patents in England [in 1896], more than half were for improvements in bicycles.”

Not all of the products described in the patents got made. This was especially the case for suspension products. The bad roads of the day meant some form of suspension would be useful but John Boyd Dunlop’s invention of the pneumatic tyre in 1889 gave cyclists a floating-on-air-feeling that meant suspension gizmos were no longer needed.

Following lobbying by cyclists, many road surfaces were improved, further relegating suspension products to history. Until, that is, bicycles went off-road in the 1980s. And this is when I started writing about bicycles. ‘Off Road Reid’ was my MTB column in Bicycle Times, a column transferred across to Bicycle Action, a generalist bike mag published by Drew Lawson, founder of the original Muddy Fox. This was 1987, before Mountain Biking UK (MBUK) came along. Mint Sauce, the mountain biking sheep, wasn’t originally drawn for MBUK. Jo Burt’s character was born on the Off Road Reid column in Bicycle Action.

When I became a trade mag editor and wrote about bike tech matters – never my strong point – I started to get telephone calls and letters from Dr Dick Swann of the Cycle Engineers’ Institute. Before his death in 2003, Dr Swann (the doctorate was in divinity) would contact me if I ever dared suggest a particular product was in any way innovative. He drummed into me the fact that almost all bicycle innovations had taken place before 1899. 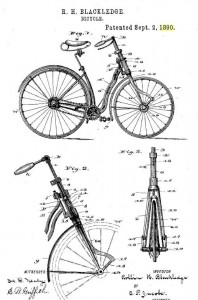 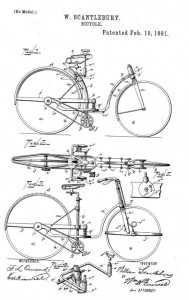 But, flicking through Cycling Life magazine yesterday, I happened upon a design that I had assumed was, despite my indoctrination by Dr Swann, a 1980s innovation: aerobars.

Greg LeMond used a set to win the 1989 Tour de France. Scott USA, a ski company turned bike maker, is credited with the design for these bars. They were developed in 1987 by ski coach Boone Lennon. But cycle historian Jim Langley says the first aerobars were invented in 1984 by Richard ‘Speedplay’ Bryne for Jim Elliot to use in the 1984 Race Across America.

I don’t doubt that for a second, but I can push back by nearly a century the invention of something that looks a lot like aerobars. 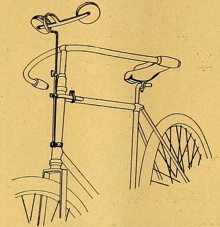 Cycling Life of 1896 records that the inventor of this set was Sylvester E Cleveland of Harrison, Illinois. The handlebar rests were meant to provide “wonderful benefits to those who race, as well as those who indulge in long distance riding.”

The science of aerodynamics was still some years off and while Cleveland’s innovation would have had aero benefits the design was produced in order for a moving cyclist to rest awhile.

Talking about aerodynamics, the aero testing wind tunnel was invented by a pair of bicycle mechanics: the Wright Brothers. A handlebar-mounted wheel was fitted with two metal plates, one flat, one curved, ninety degrees apart. Orville and Wilbur used the device to measure air resistance.

“The results obtained with the rough apparatus…gave evidence of such possibility of exactness,” wrote Wilbur.

By riding along and generating some wind flow, the brothers were able to disprove earlier theories on lift.

The brothers later invented the wind tunnel to fine tune their early experiments in aerodynamics. This was a box six feet long and sixteen inches square on the inside. They mounted a fan attached to a sheet metal hood to one side and replaced a panel on the top of the box with a pane of glass so they could see inside. The fan moved the air through the tunnel at 27 miles per hour and the brothers tested hundreds of small sections of wings and wing shapes. High-tech wind tunnels would, of course, be later used to fine-tune the best aerodynamic shapes for bicycles…