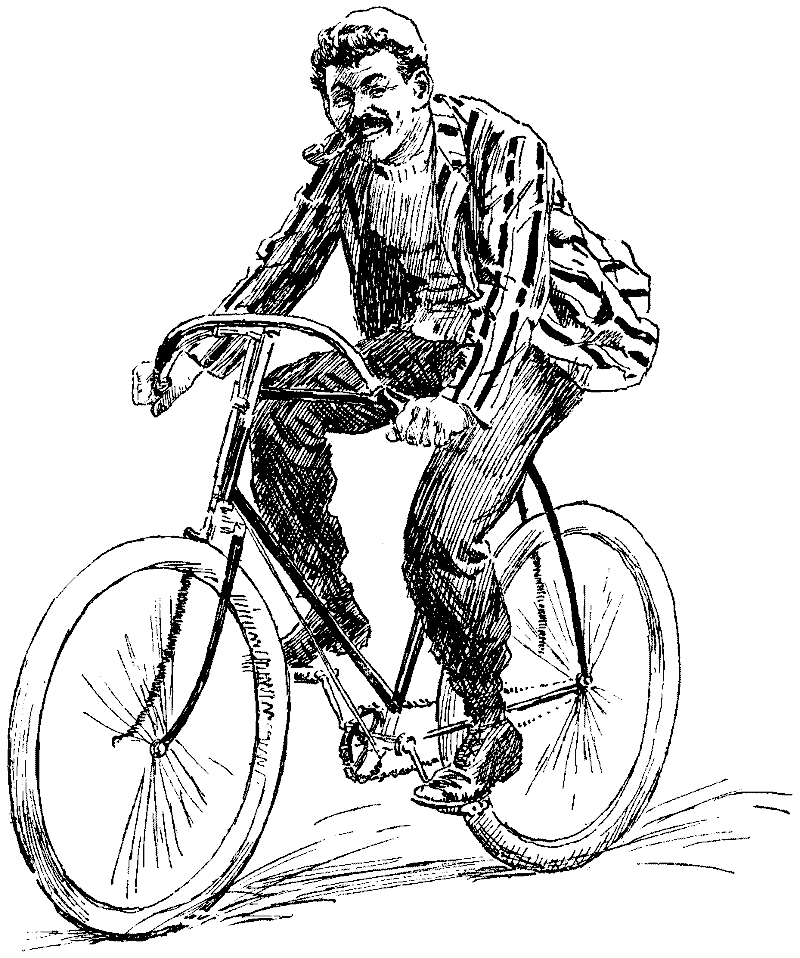 It’s 1893. Road locomotives, such as the newfangled motorcar, cannot be practically driven on the queen’s highway (they’re not street legal for another three years). The fastest thing on the roads is still the bicycle. But a dip in bicycling’s popularity and a recession (some bicycle firms went pop in 1893) have seen more second-hand machines coming on the market. Some of the new riders have less manners than the gentleman riders of the 1880s, and ‘scorchers’ were frightening the beejezus out of pedestrians. It was still three years away from the peak of bicycling’s popularity – when high society took to the wheel, from royalty to aristocracy to the middle classes – and, in the comic song Blazy Bill, satirical magazine Punch took a real dig at the ‘Cycling Cad’.

To be sung to the tune of ‘Daisy Bell, a Bicycle made for Two’, a music hall favourite, written by Harry Dacre in 1892, Blazy Bill was written from the pedestrian’s perspective.

“The churl in nature up and down” is perennial and ubiquitous. Like the god Vishnu, he has many avatars. Every new development of popular pastime (for instance) developes its own particular species of “Cad.” Leech’s “Galloping Snob” of a quarter of a century ago has been succeeded by that Jehu of the “Bike,” the Cycling Cad, to whose endearing manners and customs in the Queen’s highway, and elsewhere, the long-suffering pedestrian is persuaded a laggard Law will shortly have to find its attention urgently directed. Mr. Punch, who is of the same opinion, adapts Mr. Harry Dacre’s popular song to what he is convinced will be a popular purpose.

There is a fear within my heart,
BLAZY! BLAZY!
Planted one day with a demon dart.
Planted by Blazy Bill.
Whether he’ll kill me, or kill me not,
Smash me or only spill, [not
Little I know, but I’d give a lot
To be rescued from Blazy Bill.

Chorus—
BLAZY! BLAZY!
Give me a chance, Sir, do!
I’m half crazy,
All for the fear of you.
You haven’t a stylish way, Sir,
I can’t admire that “blazer”
(Which you think sweet).
The curse of the street
Is the Bicycle Cad—like you!

You rattle along as though for your life,
BLAZY! BLAZY!
Pedalling madly, with mischief rife,
Blundering Blazy Bill!
When the road’s dark we need Argus sight,
Your bell and your lamp do nil
But dazzle our eyes and our ears affright,
Blustering Blazy Bill!

Chorus—
BLAZY! BLAZY!
Bother your “biking” crew!
I’m half crazy,
All for sheer dread of you.
I can’t afford a carriage,
If I walk — in Brixton or Harwich —
The curse of the street,
I am sure to meet
In a Bicycle Cad like you!

Why should we stand this wheel-bred woe?
BLAZY! BLAZY!
Yes, your vile bell you will ring, I know,
Suddenly, BLAZY BILL,
When you’re close on my heels, and a trip I make,
And, unless I skedaddle with skill,
I’m over before you have put on the brake,
Half-fuddled BLAZY BILL!

Chorus—
BLAZY! BLAZY!
Turn up wild wheeling, do!
I’m half crazy,
All in blue funk of you.
The Galloping Snob was a curse, Sir,
But the Walloping Wheelman’s a worser.
I’d subscribe my quid
To be thoroughly rid
Of all Bicycle Cads like you! 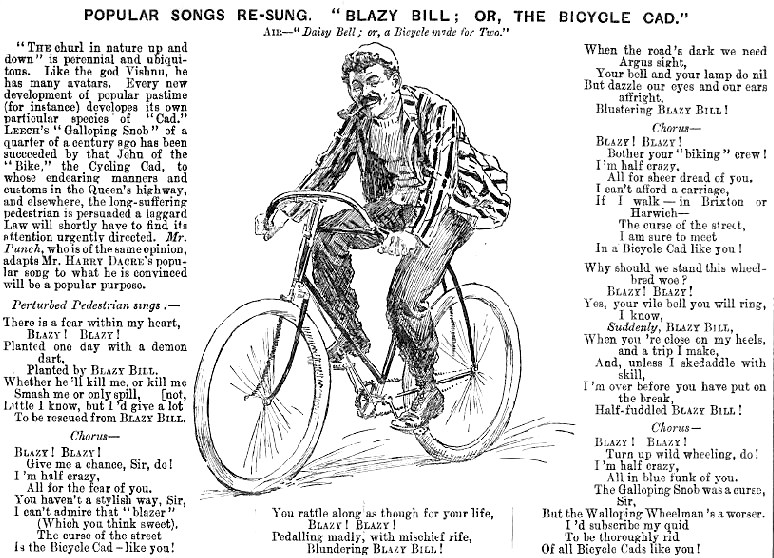