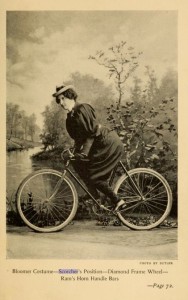 Cycling has many health benefits, “of the rosy, romping, rollicking kind,” said Dr. Victor Neesen in an 1899 ‘how to cycle’ book.

However, the good doctor – a gynaecologist – was a stickler for the proper position to be struck when riding “a wheel.”

He had no truck with the “sit up and beg” position, championed by most other authors of the time.

While his book was aimed at the lay audience, he stressed the importance of a slightly inclined position, even for everyday cyclists who had no desire to speed, or in the language of the time, “scorch.” 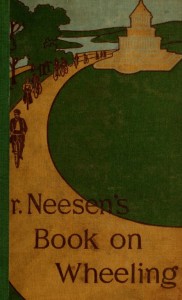 The position the rider assumes on his wheel is of vast importance in many respects. His health, his endurance, his control of the wheel, his power of propulsion, his speed, are all dependent upon his position in the saddle.

There are three distinct positions recognised: viz., the “upright,” the “inclined,” and the “scorcher’s.” All the authorities unite in condemning the scorcher’s position, except for racer’s use. Then opinion is divided between the other two. It is regrettable that most of the medical men have favored the upright position and have strongly condemned the inclined position as little better than the scorcher’s. On the other hand, practical bicyclists and a few physicians who have studied the subject affirm that the inclined position is the only correct one. It may be all right in theory to “sit up straight” but sitting in a bicycle and sitting in a chair are two separate and distinct things, and are incomparable.”
Victor Neeson, M.D., Dr. Neesen’s Book on Wheeling (1899)

Incorrect position, according to Dr Neesen:

Correct position, according to Dr Neesen: 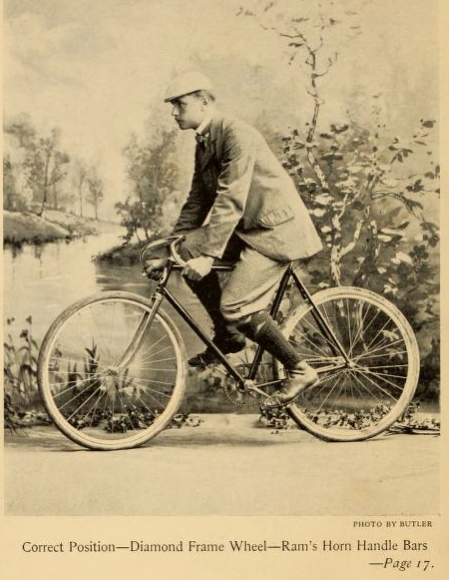 In the same year as Dr. Neesen published his book, Scientific American ran an article (May 13th 1899) that described “modern” bike fitting almost exactly, claiming there to be a need for “a new kind of medical specialist, the consulting cyclist.”

This cyclist, proposed Scientific American would:

…devote himself to giving medical and practical advice as to all that concerns the use of the machine…how the saddle is to be adjusted; where the handles are to be set…all things which differ for each individual…Surely the decision as to all the details of bicycling, especially when bicycling is undertaken for health purposes, is a medical affair, and is also one which may very properly be made a speciality.

Most cycle authors of the time advised a relaxed position when cycling.

Riding fast was anathema to authors such as L. F. Korns. He was especially careful to advise that women must sit erect and ride gracefully: “A lady with improper position and dress is especially hurtful to the cause of cycling.”

For Korns, cycling was a:

…thing so full of utility, and which can be made so full of grace by proper position and dress, will not be long in commanding a place among the necessities in this age of progress.

There are many things that go to make the graceful rider. You must give each detail attention or you will fail. One incorrect move or poise of any part of the body will be noticed as eccentricity. An erect position, steady on the saddle, but when all is done,the crowning grace is that of apparent ease. They who pitch the body forward with every down- ward push, make the bicycle appear to be a tread mill, requiring so many horse power to move it.

Mr Korns – like many commentators today – said the sight of such speedy, head-down riding did cycling no good whatsoever:

“Rocking from side to side creates a chafing sensation to those looking on. Saddles too low, toes in, knees out, elbows high, head low, back humped, hurts the sale of bicycles.”

Incorrect position, according to L.F. Korns: 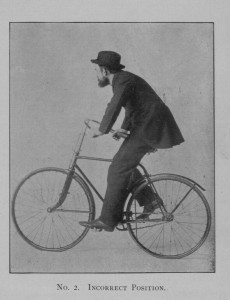 Correct position, according to L.F. Korns:

As a means of pleasure, cycling stands in the foremost rank, but in common with all the great pleasures, it may easily stand in the foremost in abuse. The desire to ride at an unreasonably high speed may become morbid…The ever lasting scorcher, bent like a hoop, and with sunken cheeks, ought to be quite sufficient warning against this abuse. Other writers were similarly sniffy about scorching, claiming it could kill. This poem appeared in the Good Roads magazine of the League of American Wheelmen in 1896:

I am the scorcher!
Please observe
The curve
That appertains unto my spine!
With head ducked low
I go
O’er man and beast, and woe
Unto the thing
That fails to scamper when I ting-a-ling!

Let people jaw
And go to law
To try to check my gate.
If that’s their game!
I hate
To kill folks, but I’ll do it just the same,
I guess,
Unless
They clear the track for me;

Because, you see,
I am the scorcher, full of zeal,
And just the thing I look like on the wheel!