I’m writing a book about the US and UK cyclist organisations of the 1880s and 1890s which lobbied for good roads – and got them – before the motorcar came along and stole their thunder. ‘Roads Were Not Built For Cars’ will be a social history of the bicycle’s contribution to public life, arguing that cars are the johnny-come-latelies on the highways of Britain and America.

The role of bike shops in the spread of the popularity of cycling is underplayed, or not mentioned, in pretty much all of the bicycle history books I’ve consulted so far.

To research the book (which will be a free e-book, supported by trade advertising, as well as an all-singing, all-dancing paid-for e-book and print title) I’m reading widely, including poring over bicycle trade journals, yellowed with age. As a bike trade mag veteran I’m finding this research illuminates the present.

Bicycle retailers have been fighting against sellers of cheap Bicycle Shaped Objects for at least 120 years. Tescos and Wal-Mart muscling in on bike shop sales isn’t a new phenomenon: the cycle retailers of the 1890s also railed against the supermarkets of their day. When Specialized and other specialty-channel brands talk about protecting independent dealers, they’re echoing the concerns and sales pitches of equivalent bike brands in the 1890s. 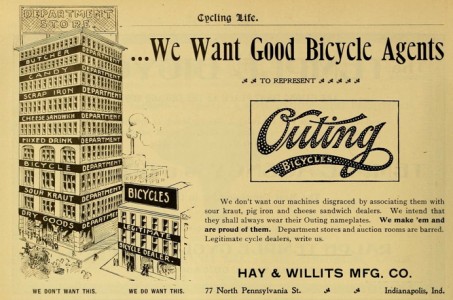 Outing Bicycle said in an 1897 ad: “We don’t want our machines disgraced by associating them with sour kraut, pig iron and cheese sandwich dealers.”

An editorial in US weekly trade magazine Cycling Life, also in 1897, railed against department stores. It was necessary to “check the evil before it becomes too great for suppression.”

The magazine recommended the creation of a “separate classification to the bicycle sold by the department stores and thereby distinguish it from other machines”, adding “it is clear that if supply houses and bicycle makers do not mutually assist each other in crushing out the competition of department stores the stores will swallow up the reputation of both.”

Cycling Life had little to say on the challenge posed by Sears Roebuck & Co. Perhaps bicycles-by-mail were deemed too uncouth to even mention? Sales via independent bicycle dealers would soon be lost to the early mail order specialists.

Just as bike sales over the the internet have impinged on many modern dealers, the bike shops of the late 1890s faced similar challenges. In 1895, Sears, Roebuck & Co. of the US was producing a 532-page catalogue.

Who could resist Dr. Chaise’s Nerve And Brain Pills? This was a patent medicine cure for those with “overworked sexual excesses.” There were also items such as shoes, fishing tackle, glassware, guns (lots of guns, including specialist ones for cyclists) and, of course, bicycles and bike parts, such as wheels, valve stems, child seats, horns, clothing and pumps. 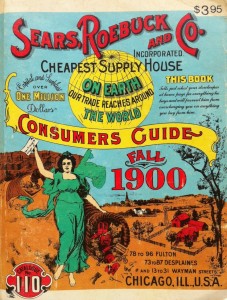 Cyclists in the US even helped such a trade to flourish not only because they bought mail order but because their championing of better roads to ride on led, in turn, to the ability for postal services to reach into the far reaches of the US. Bad rural roads had previously kept many communities cut off from the rest of society for much of the year: railroads weren’t everywhere. Today, Chain Reaction Cycles sends bike kit all over the world; in the 1890s, so did Sears Roebuck & Co. It claimed it was “The Cheapest Supply House On Earth” and that “Our Trade Reaches Around The World'”. (However, despite its grandiose claim, the only shipping rates in the Sears Roebuck catalogues of the 1890s are for American States). 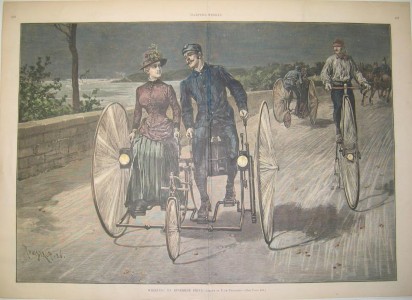 The late 1890s were a golden age for bicycles. They were seen as technological marvels and were ridden by Royals and rich young blades. In 1891, entry level bicycles were sold for at least $100 a piece. Fancier bicycles sold for $150 or more. To put this into perspective, a worker in one of the many factories producing bicycles in 1891 would have to work for six months to be able to afford one of the items he was assembling.

Prior to the boom of 1895-7, bicycles were the red Ferraris of the day: fast playthings of the rich.

When bicycles were luxury items, there were few bicycle retailers. When the middle classes started buying bicycles in big numbers, the number of specialist bicycle retailers increased to cope with demand. There were 100,000 visitors to a cycle show in New York in 1896, of which 2000 were ‘cycle agents’, such as bike shops, and hardware stores which sold bikes. In 1897 America manufactured 1 million bicycles; England made 600,000. American and English bicycles were exported around the world but, until the bubble bursting required “dumping” product overseas, the biggest markets were domestic markets. Bicycle shop owners made a tidy living. The Wright Brothers – they who, in 1903, perfected powered flight (one of the brothers is seen in the shop’s workshop, above) – paid for their aviation experiments from the profits generated in their bicycle shop, founded in 1892. The Wright Cycle Co. of Dayton, Ohio, was profitable for many years. In 1897, their best year, they made $3000 between them at a time when a very respectable white-collar wage was $500 per year.

One of the reasons bike shops made so much money – apart from the crazed cravings of customers, who had to have the buzz product of the day – was because of manufacturer’s sales tactics that would later be taken up with gusto by automobile manufacturers. Bikes were bought on credit, with instalment payments a novelty at the time. Bicycle manufacturers also innovated with “planned obsolescence”, creating models with short lifespans before another, improved model came out (it was manufacturers who most benefitted from this; bike shops had to offer trade-in deals and then offload “dated” bicycles as secondhand machines, these went for as low as $15, making bicycles more affordable for the masses, the bicycle was soon to become, truly, the “peoples’ nag”).

1897 was to be the peak year for the upper and middle class bicycle boom, in both America and England, with America witnessing the bursting of the bubble first. After 1897 trade in the US started going downhill, prices plummeted.

In England, the boom was also over by 1897 but it took at least another year before it was obvious the craze was at an end. Travel writing husband and wife team Joseph and Elizabeth Pennell said 1899 “was as bad a year as the (bicycle) trade has ever seen.” As bicycle retailing became less profitable, the numbers of bicycle retailers fell through the floor. Bad for bicycle manufacturers, good for aviation. After 1897, sales – and profits – at the Wright Cycle Co. were much reduced. On May 30th 1899, Wilbur Wright wrote to the Smithsonian Institution, asking for papers on man’s attempt to fly. He paid for the papers from his and his brother’s bicycle business. The accounts for the Wright Cycle Co. includes an 1899 entry of $5.50 “for books on flying.” (Wright Cycle Co. stopped producing own-label bikes in 1904. The bike store continued to sell branded bikes and P&A but was converted to a machine shop in 1909 when the Wright Company, an aircraft manufacturing business, started producing bicycle-inspired parts for aeroplane engines). 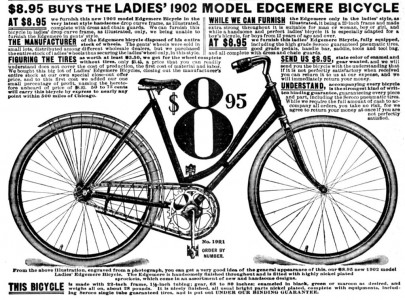 Sears Roebuck & Co. didn’t cause the bicycle crash of post-1897 but it made life much more difficult for bicycle retailers. The mail order giant was selling bicycles for as low as $7.50 by 1900.

Retailers of every stripe were impacted by price-cutting by department stores and mail order merchants. Manhattan’s Siegel-Cooper department store sold $100 bicycles for just $22 in 1897. The Sears Roebuck catalogue boasted:

“This book tells just what your storekeeper at home pays for everything he buys and will prevent him from overcharging you on anything you buy from him.”

Yet despite the market-warping power of the department stores and early mail order giants – they were the Amazon.com’s of their day – some bike shops founded before the Great War still exist today.

Pearson Cycles of Sutton, West London, was founded in 1860. Howes of Cambridge was founded twenty years earlier. Both pre-date the modern bicycle. Pearson’s started life as a blacksmiths; John Howes was a wheelright and carriage maker. 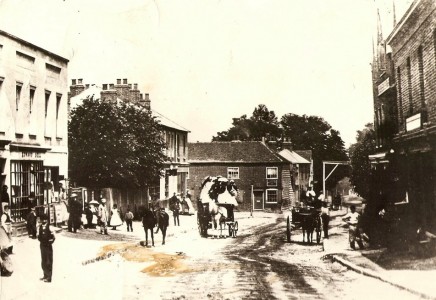 Pearson Cycles – seen above, on the right – is still in the same building as the original blacksmith’s forge, albeit much renovated. Brothers Guy and Will Pearson – the fifth generation from the family to run the shop – recently opened a new branch, a few miles away in Sheen.

“We have a slow roll-out programme; one store every 150 years,” Will jokes. The shop is now very high tech (the new ‘concept store’ is a bicycle fitting specialist and was opened by Sean Kelly, the dominant classics rider of the 1980s) but, when needed, an item from the 1860 forge is still used in the workshop:

“The anvil still gets dragged out for occasional stubborn workshop jobs, or customers.”

According to the website for Howes Cycles, the business has “traded in the heart of Cambridge in Regent Street for over one and a half centuries.”

“Family legend has it that one of the [Howes family] went to Paris to an exposition in 1868, saw this strange two wheeled thing and thought ‘I could make that with the equipment we already have in Cambridge.’ So he did. We still have one of the high wheelers we made back then.”

In America, the oldest still-trading bike shop is Bishop’s Bicycles of Milford, Ohio, founded in 1890. Kopp’s Cycle of Princeton, New Jersey, was founded by E.C. Kopp in 1891 at the tail-end of the high-wheeler era. Safety bicycles, with two equal sized wheels and later shod with new-fangled pneumatic tyres, were disparagingly known as “jiggers” by the gentlemen on their elevated steeds but soon dominated the scene, leading to increased business for specialist retailers such as Bishop’s and Kopp’s. 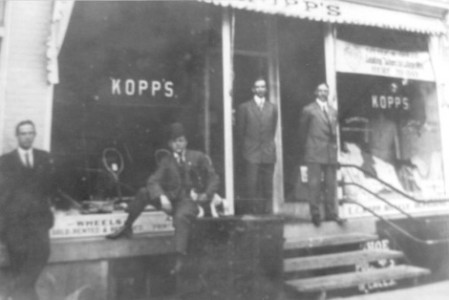 The father of Charles Kuhn, the current owner of Kopp’s, bought the business from the founder’s wife in the 1940s.

Kuhn Snr and Englishman Dick Swann – who I knew, and who I’ve mentioned previously – pioneered the US import of Italian racing bicycles and parts in the 1960s. 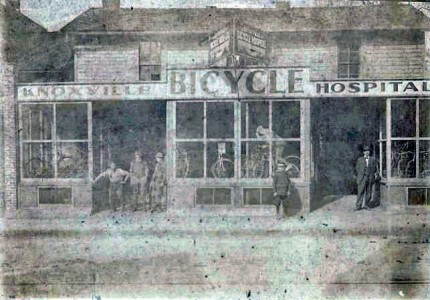 Guthrie Bikes of Salt Lake City was founded as a bicycle manufacturer in 1888, converting to retail in 1907.

In the book – due to be published early in 2013 – I’ll delve deeper into the important role of bike shops in the development of cycle sport, cycle touring and, later, motoring.