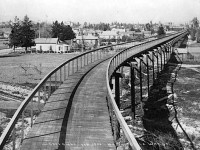 At the end of the 19th century America had the world’s best cycle infrastructure: the elevated California Cycleway and the Coney Island Cycle Path.

I reckon way is a far more powerful and positive word than path. In America and Britain, path became low status: a path is deemed to be narrow and for walkers. The words path and pad indicate earth beaten down by feet (either human or animal). In Victorian era magazines there was much discussion about “bicycle roads”. The use of the right terminology can be important, especially in cultures which later downgraded the bicycle. In the Netherlands, a fietspad – or “bicycle path” – is not low status. Way denotes moving or traveling and comes from the same Sanscrit root (vah) as the words wagon and vehicle. Perhaps Eric Claxton, designer of the New Town of Stevenage, had the right idea when he insisted that the separated cycle infrastructure he created had to be called “cycleways”. Claxton’s grand-daughter Joanna Brown told me he was very proud of his cycleways and insisted on calling them that:

I remember as a child being pulled up for using the wrong term and being told “paths are for pedestrians, tracks are for horses, I built cycleways.”

In the UK, the official word for sidewalk is a footway. And, of course, motor-specific roads are motorways. Perhaps one way of being upbeat about bicycle infrastructure could be to stop using cycle paths, and instead insist on cycleways?

10 thoughts on “Don’t be beaten down, make your way in the world”