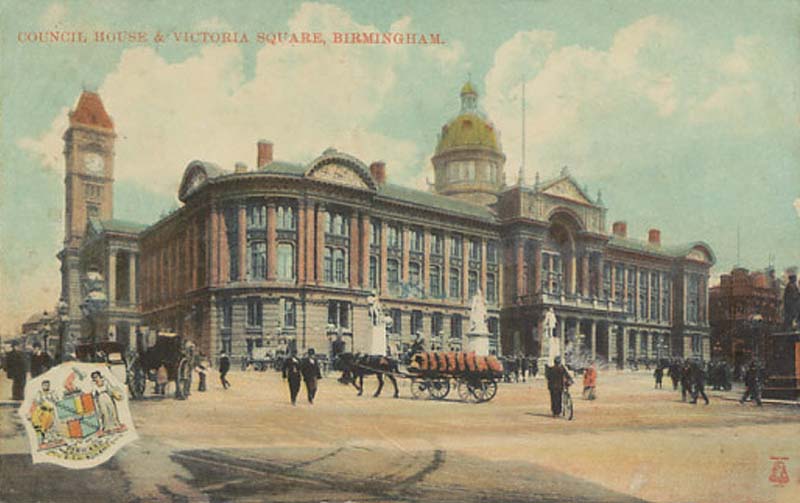 I’ve just left the stimulating Cycle City conference in Birmingham. 450 delegates from across the UK – and the world, in fact – came together to chew the cycling fat in a number of seminars and talks, some held in Birmingham’s impressive Victorian Council House. I gave a talk on the “Disneyland” cycle-infrastructure of Stevenage, using a lot of source material not used on this earlier posting on the work of Stevenage’s chief designer – and unsung cycling figure – Eric Claxton. During an excellent presentation on roadspace allocation by Mike Davies, the cycling projects leader of Cambridgeshire County Council, it was mentioned that the glorious space in front of the Council House wasn’t always traffic-free.

In the late 19th Century, as can be seen above, it was hectic, but safe for pedestrians, cyclists, carriages and other road users. Victoria Square slowly became dominated by motor-cars. In the 1960s – as this picture shows – the domination wasn’t complete but by the 1970s and 1980s, the streets linking in to the square were chocka with the type of motorised traffic that has come to dominate so many of our cities. Much of Victoria Square was taken up with a roundabout.

I asked the doorman when the roundabout was removed, and replaced with a great looking pedestrian plaza that allows access to cyclists and council vehicles but no access to cars and buses and HGVs.

I looked outside. It wasn’t the 1970s, it was 1994, and the plaque was a recognition for Birmingham City Council winning a design award for “the renaissance of the city.” Take a vote now and nobody but nobody would want to return Victoria Square to a traffic-snarled space. It’s a great example of “roadspace reallocation”, albeit a total one in that the road itself has gone. The public highway has not disappeared, though. The square is still a through route, just not for motorised vehicles. There’s an important legal maxim: “Once a highway, always a highway.” Traffic regulation orders can prevent cars – and, heaven forfend – bicycles from using so-called pedestrian plazas but the highway remains. A highway is not the same as a “road”, it’s both a physical thing and a concept, a right of way. Victoria Square is people-friendly. Much of the rest of Birmingham is motor-friendly. Victoria Square shows that getting rid of motors doesn’t kill a city centre, it’s very much the opposite. Reallocation of roadspace was a recurring theme at Cycle City. It was a phrase featured in the Get Britain Cycling report public launch, held at the expo, and it was also a phrase I used in my build-it-and-they-may-not-come-unless-lots-of-other-things-are-done-too seminar.

Reallocation of roadspace is a phrase with a long history. The example I chose to show in my talk was from a leaflet produced by the All Change to Bikes campaign of the 1970s. This was an umbrella group comprising organisations such as the Cyclists’ Touring Club, the Bicycle Association, Friends of the Earth and many others.

This PR-led push, long since forgotten, called for segregated cycleways as well as roadspace reallocation. It’s important to remember that such ideas are not new. British cycle organisations – including the CTC – were calling for these radical-for-the-time interventions in the 1970s. 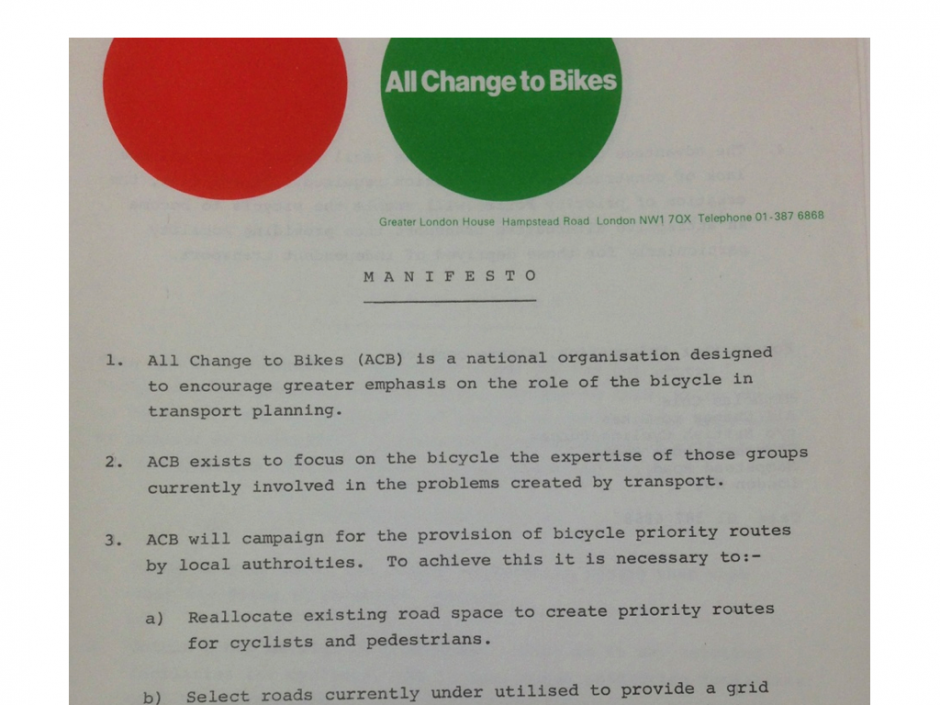