In August 1867, the Paris correspondent of the New York Times wrote an editorial that resonates down to us today. (And by today I mean today: The Times of London has a cover story on an eight-point plan to increase […] 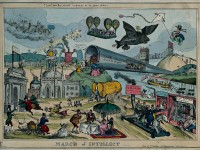 Satirical artist William Heath produced this fascinating depiction of transport of the future in 1829, a year before the first passenger steam train service, and while horse-drawn stage coaches still ruled the road (they plied their trade on turnpikes, the […]