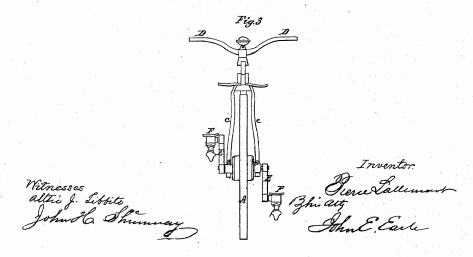 In August 1867, the Paris correspondent of the New York Times wrote an editorial that resonates down to us today. (And by today I mean today: The Times of London has a cover story on an eight-point plan to increase safety for cyclists). The new-fangled velocipede was seen as the bee knees and carriages were seen as too big and clumsy for city streets.

A velocipede…is a vehicle with pedals and a complication of cog wheels with cumulative power, which the young man propels with his feet with great velocity, which he guides with an upright bar, and which he learns to balance very readily. Their fabrication has been brought to such perfection both for velocity and lightness, that at speed they are scarcely visible and the man has the…appearance of flying through the air.

Now see the advantages of this form of locomotion:

2. Suppression of the Society for the Prevention of Cruelty to Animals.

3. Every man can keep his carriage.

4. Curtailment of the shoemaker’s trade.

5. Forced adoption by women of the bloomer or some other more convenient costume.

6. Great economy of time as well as money.

7. Immense development of independence in character.

8. Immense development of muscle and lungs and physical manliness.

Is it not absurd, is it not a disgrace to the inventive age we live in, to see a man obliged to employ, in order to get through the street, a great vehicle, as large almost as a house…which fills your eyes with ugly sounds, splatters you with mud, and obstructs the highway?

In principle, nothing could jar more with the inventive age in which we live. So let us have the velocipedes…