East Grinstead in 1907 doesn’t look terribly swamped with motorcars and would have probably been even less so three years earlier. This was when Sir William Thomas Charley shuffled off this mortal coil. The 71-year old died on a hot July morning shortly after he said he had been “getting out of the way of motor-cars on his bicycle.” 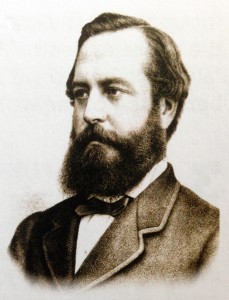 Sir William had been a Conservative MP in the 1860s and 1870s, and later became a judge. Originally from Ireland, Sir William had been living in the Sussex town for five years before his death. Cycling, according to an obituary in The Times, was “one of his favourite recreations.”

He had been president of the Pickwick Bicycle Club – the world’s oldest extant cycling club – for the five years between 1885 and 1889. (He’s still the longest serving president). Sir William was a socially-aware Victorian gent, one of the founders of the United Kingdom Beneficent Association, a charity providing financial help to older people in poverty. This was created in 1863 and now known as Independent Age.

In 1904, there were 8,465 motorcars in use in the whole of Great Britain. Today that’s about the number of private cars in just East Grinstead.