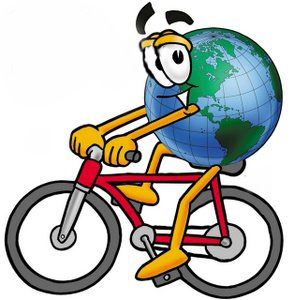 Use of cars – unfettered individual motorised transport – plays a big part in man-made climate change. Cycling can make urban transport greener, almost as green as walking, and bicycles will play a key role in the cities of the future, even if transport engineers and city planners can’t quite see this yet.

The bicycle is future-proof because of its simplicity. It has the never-bettered ability to amplify human strength and extend the distance that a human can travel without the aid of a motor, or a horse.

And it was this ability – especially of the horse bettering kind – that led to the creation of what would become the bicycle. Interestingly, the contraption that would later morph into the bicycle was created in answer to a transport crisis brought on by a cataclysmic climatic event. 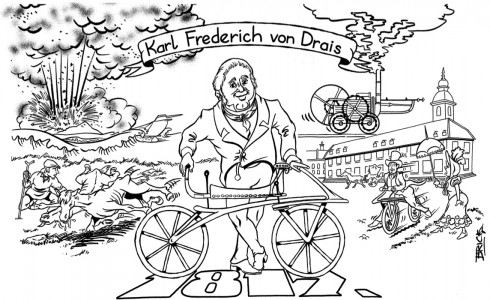 In April 1815 Mount Tambora in Indonesia erupted spewing lava and ash until July of the same year. It was the biggest eruption in 1300 years and the sky was so loaded with dust that average global temperatures dipped, and artists had a field day, painting scenes with dramatic sunsets. 1816 became known as the ‘year without a summer’.

On holiday by Lake Geneva in Switzerland, Mary Shelley, her husband Percy and John William Polidori were trapped in Lord Byron’s house by constant rain. Byron suggested a essay writing competition: come up with a ghost story. Mary Shelley created Frankenstein; Polidori wrote The Vampyre. Not too far away, in the German Grand Duchy of Baden, a minor aristocrat noticed that horse travel was becoming crippingly expensive: harvests had failed due to the ash cloud, and staples such as oats had soared in price. Feeding a horse with oats – like feeding a car with petrol today – was becoming too expensive. This minor aristocrat was Baron Karl Von Drais. 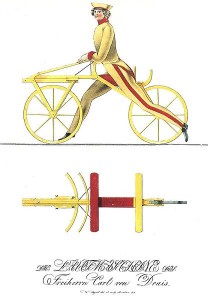 He wanted to find a substitute for the horse. He created what he called the Running Machine, the Laufmaschine, what the French would call the vélocipède (from Latin, vēlōx fast and pēs foot). This was made of wood and – revolutionary in many ways – had two inline wheels. It didn’t have pedals, it was propelled by the feet striking the ground. It did not replace horses; it did not become poor man’s transport. In fact, the Draisinnes of 1817-19 were the toys of wealthy owners. Dandies, in particular, were much taken by this machine and there was a brief burst of enthusiasm for what were also called Accelerators.

The roads of the time were too rough and cut-up for extended use by these early velocipedes. Some riders therefore took to the pavements (sidewalks) and were duly fined, stiffly, for their incursions into the pedestrian’s domain.

Velocipedes were also used indoors, on groomed dirt surfaces. Dandies would learn to ride their machines in schools but some never left the confines of the indoor tracks, treating the premises as gymnasiums. 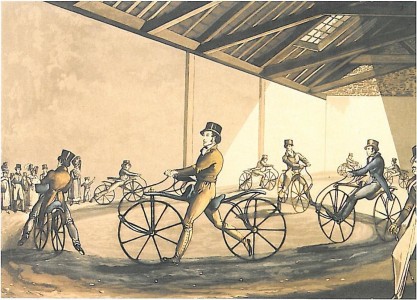 A postcard depicting the UK’s first-ever velocipede school has been found in the archives of Westminster City Council. This school was created in Westminster in 1818 by Denis Johnson, a coachmaker from Long Acre.

Denis Johnson (c.1760-1833) improved Drais’s machine and patented his version in December 1818. He called his machine a pedestrian curricle and made about 320 of them before the craze expired in 1819. Velocipedes went out of fashion; Johnson went back to creating carriages. It took the addition of pedals and cranks by Pierre Lallement of Paris in 1863 to spur the next round of innovations, innovations that eventually led to the bicycle we know today, which then spurred the development of powered trikes and bicycles, the start of the automotive and motorbike industries.