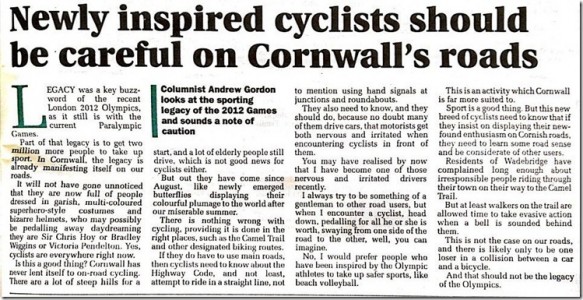 The Wadebridge People is not The Thunderer and Andrew Gordon is never in any danger of winning a Pulitzer so I’m not losing any sleep over the editorial above but as a historian of roads one phrase jumped out at me: “Cornwall has never lent itself to on-road cycling.”

Never? Really? Never ever? Driving everywhere has befuddled the brains of many people, Mr Gordon among them. Perhaps it’s carbon monoxide poisoning or something? For many folks the timeline of roads goes like this: Romans, stagecoaches, cars. Bicycles, if thought about all, are seen as a historical novelty, a short-lived fad.

It might come as a surprise to Mr Gordon, and others like him, but cyclists were enjoying Cornwall’s roads long before cars came along. And, as this blog-of-the-forthcoming-book frequently points out, cyclists were the prime movers behind the resurrection of Britain’s roads in the final quarter of the 19th Century. Many motorists assume roads were built for them; that asphalt is a relatively recent creation designed to speed them along; and that non-motorised road users have lesser rights. None of this is true.

In his 1968 book Black Top: A History of the British Flexible Roads Industry J. B. F. Earle (a former commercial director of Tarmac Ltd., and first chairman of the Federation of Coated Macadam Industries) wrote:

“The first concerted pressure on the Government for the improvement of rural roads came from the cyclists.”

He was talking about the Roads Improvements Association, created by the Cyclists’ Touring Club in 1885.

In 1886, the CTC organised the first ever Roads Conference in Britain. With patronage – and cash – from aristocrats and royals, the CTC published pamphlets on road design and how to create better road surfaces. County surveyors took this on board (some were CTC members) and started to improve rural roads.

Even though it was started and paid for by cyclists, the RIA stressed from its foundation that it was lobbying for better roads to be used by all, not just cyclists.

By the early 1900s most British motorists had forgotten about the debt they owed to prehistoric track builders, the Romans, turnpike trusts, John McAdam, Thomas Telford…and bicyclists.

But let’s go back to Mr Gordon’s claim that Cornwall “has never lent itself to on-road cycling.”

These guidebook extracts show that Mr Gordon might want to do some research before pontificating about Cornwall’s lack of cycling heritage.

(Above) Map of Devon and Cornwall from The Cyclists’ Route Book for Great Britain, 1893. (Above) Extract from The Cyclists’ Route Book for Great Britain, 1893. (Above) Mentions of Wadebridge and Padstow in The Bicycle Road Book, 1881

But before Mr Gordon thinks all the above proves that bicycles are Victorian playthings, with little relevance today, he ought to chew on the following quote from Bath University’s traffic specialist Dr Ian Walker. The quote is in this month’s issue of The Psychologist:

“The bicycle…must form part of our future. At the moment there is an incredible research effort to design better cars for the future. None of these efforts address the fundamental design flaws of the car. Even if somebody came up with a car that runs off angels’ sighs and never crashes, it would still encourage sprawling urban planning, bad land use (especially for parking) and would still encourage its owner to get fat and unhealthy. The population is rising; we don’t have the space to accommodate more and more cars and we have some serious population health issues. More cycling solves a swathe of problems at a stroke, and all it requires is a simple machine that most people already have lying around their home somewhere.”