As the book pledge campaign is doing so well on Kickstarter (it blew through the £4000 target within 20 hours and the campaign still has another two weeks to run) I have to think of ‘stretch goals’. These are extra rewards for pledgers or extra investment in projects added when Kickstarter projects do better than expected. 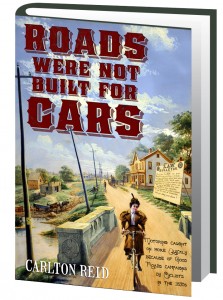 Every pledger is now going to get a poster along with the book thanks to the campaign reaching £8500 and now I have to decide whether to throw down a serious chunk of cash on bespoke cover artwork should the campaign reach £14,000. And I’d like your help. As with previous books I’ve produced – such as the Bike To Work Book – I like to get feedback on the covers I produce. [THANKS FOR ALL YOUR FEEDBACK, SEE BELOW FOR THE RESULTS].

The existing cover is by an American artist called Seth Whipple and the painting was produced in 1897 for a competition run by the League of American Wheelmen. It’s a great illustration and even if a new cover was chosen I’d likely use the Whipple painting somewhere else prominent (perhaps the back cover?).

The potential new cover would be contemporary and produced specifically for Roads Were Not Built For Cars. I’m wondering whether to commission Pete English to produce fresh artwork. He specialises in period cycling-specific artwork and, as you can seen from his Paris-Roubaix and Tour de France posters, he’d produce a damn fine cover for my book. But what do you think?

THE RESULTS ARE IN…
Thanks for the 128 replies to the online form I created. But you lot were meant to help me decide what to do and it turns out you’re just as torn as me!

I’ve decided the best thing to do, if I reach £14,000 in pledges, is commission the artist and then I’ll have another vote and you can decide which of the two covers makes the final cut. I was convinced to go down this route by the comments from people urging me to be a patron of the arts, and help create something original. I like that idea. Even if I don’t reach the new target I’ll commission a cover designer to produce a new version of the Whipple cover because a number of publishing folks said they liked the painting but not the cover design or the typography. (Shucks, that sucks -the cover font is an 1890s-style font and wasn’t cheap).

BUT WAIT…
As I’ll only be printing enough copies of the book to satisfy the Kickstarter orders I could very possibly print two versions of the book and, via the Kickstarter survey I’ll be sending out, you can choose which one you’d like. I’ll also be able to do this for the iPad and Kindle versions.

This seems to be a way of making sure everybody’s happy but it all depends on the number of eventual Kickstarter pledges and the results of the survey.

HERE’S WHAT YOU SAID
Thanks for all your comments; here are a selection of them. 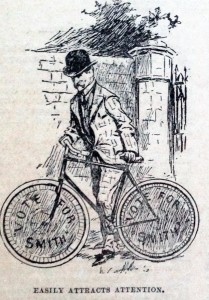 “I love art and I love the creative process, but much of the creation has already gone into this work, and I am more interested in your ideas and words.”

“I love the existing cover and think it’s perfect for the subject!”

“The existing cover is simple, it directly conveys to the reader the era and the sense of harmony involved in riding a bike on a road uncluttered by motor vehicles. The cyclist looks happy and free.The ‘new’ cover is complicated, it conveys a sense of unease and chaos The cyclist in the foreground looks harried and oppressed. Is that really what will make potential readers pick it up? I doubt it.The original cover is far better.”

“Make the cover unique as the book certainly is going to be unique.”

“I like the existing cover art as it gets across the theme of your book. But I really don’t like the font chosen for the title with the cross-hatched shadow effect nor the left-justification. The font should be retro but not as heavy as the one currently chosen.”

“The original cover was what attracted my attention in the first place – my vote is to keep it.” 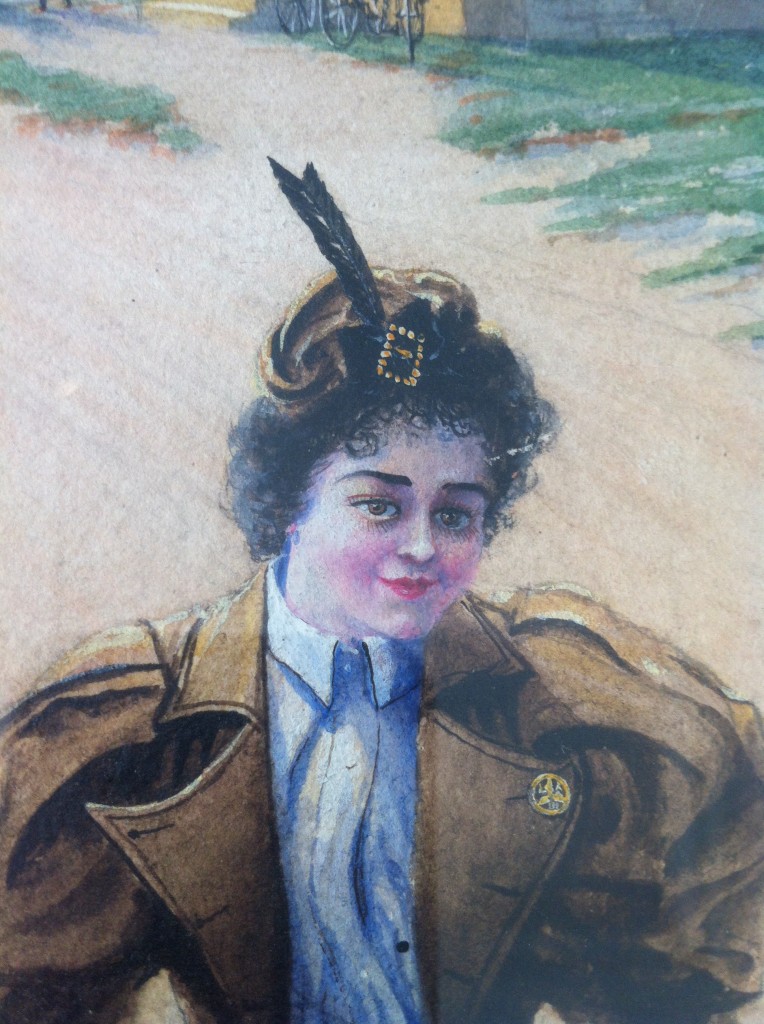 “Definitely change the font, too! It’s so old-fashioned, and though the building-of-roads-not-for-cars has taken place more than 100 years ago, the actual problem we face is very contemporary and most influential for the future, even. Go for it, I’m looking forward for the book.”

“What about the contemporary cover on the bac? It has a touch of amusement to it which seems appropriate for a rear cover, while the existing front cover provides “respectability” to the topic.”

“Your book deals with history so I think the cover should be historic, as well. Please keep the existing cover. I’m glad you introduced me to Peter English, though. His work is very nice.”

“I like the Pete English artwork – contemporary, funny but biting – just the job. The Whipple one is very evocative but rather weak in the message you need to convey, ie that cyclists are being literally forced off the roads they pioneered by the motorists who assume the roads must have been built for their sole use.” 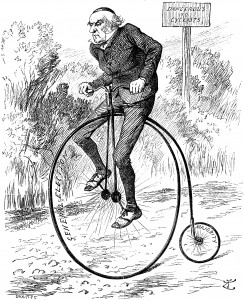 “The new artist would definately be a home-run, I feel. I love the examples listed. I’d say turn him loose on it ! This is exciting, what a concept is Kickstarter. Your execution of the concept is stellar! Did I mention I’m excited? 🙂 Can’t wait for the book.”

“I like Pete English’s style, but I don’t think it’s appropriate for the book. His style is quite whimsical, and although I’m sure you’ve included many moments of whimsy in the text, I get the sense the book overall is historical, probing, reflective, thoughtful. The Whipple cover, being a period piece, catches that spirit well.”

“Should be an ordinary on the cover!”

“Love the cartoon cover. There is interest with what you find hidden in the picture. Helps pass the time and also makes a good poster.”

“The existing cover addresses many issues at a time: the role of bicycles in the process of women’s liberation (real, not ‘ideologically’ driven); relatively smooth surface needed for comfortable cycling and a generally well maintained, balanced/sustainable landscape.”

12 thoughts on “Cover dilemma: please help me choose…[RESULTS NOW IN]”