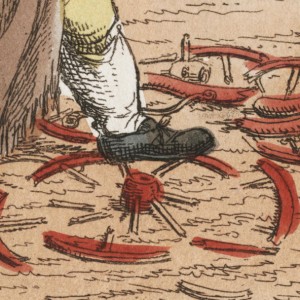 The Twitter account @cyclehatred offers up a daily digest of spite and spittle aimed at the goodly, wonderful creatures who gad about on a benign form of unpowered transport. Such hatred is nothing new. The first two-wheeler users were also loathed. This was mostly because ‘running machines’, briefly popular from about 1817, were ridden by preening toffs. These Regency dandies took to velocipedes like ducks to water, and they were easy meat for ruffians eager to test their rock-throwing skills, and for caricaturists.

Charles Williams (1797-1830) was one of many Regency illustrators who ridiculed dandies, including those who strutted and strode astride their wooden hobby-horses. In 1819, when Williams created the illustration below, the first pedal-propelled bicycle had yet to be invented (that was in the mid-1860s, by Pierre Michaux and/or Pierre Lallement of Paris). Whether it was the ridicule from illustrators, or the rocks from ruffians, the velocipede fad didn’t last long: it was over by 1820. 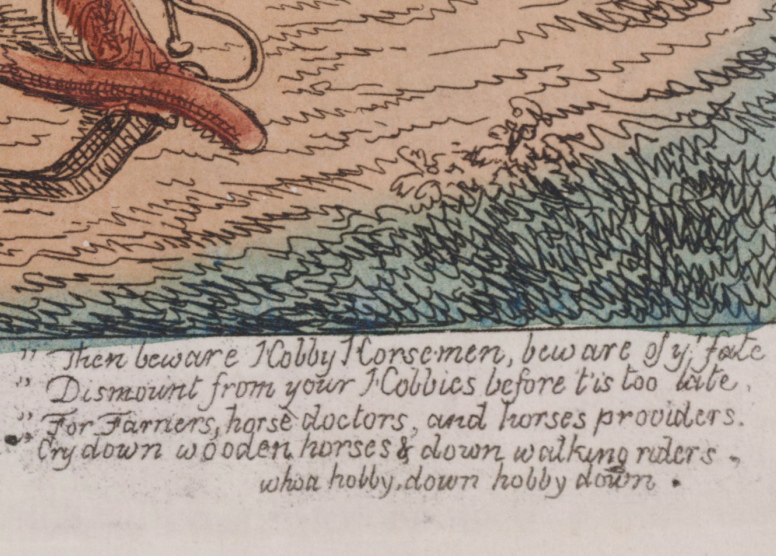 The hatred thrown the way of those on velocipedes – also known as accelerators, pedestrian curricles, hobbies and a host of other names – was virulent on both sides of the Atlantic. The Federal Republican and Baltimore Telegraph of 1819 sniffed:

“A curious two-wheeled vehicle called the Velocipede has been invented, which is propelled by Jack-asses instead of horses.” 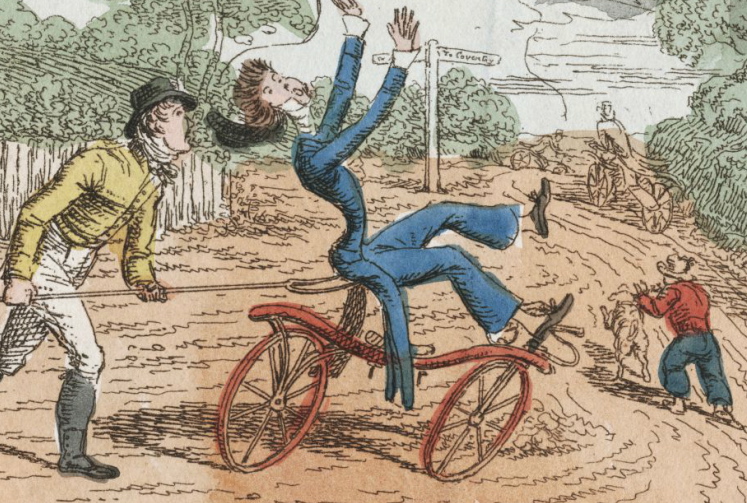 Baron von Drais, the German inventor of the ‘running machine’, had created his contraption in 1817 as a horse-substitute because, it is now believed, the price of oats, and everything else, had soared after the planet was plunged into darkness after the volcanic eruption of Indonesia’s Mt. Tambora in 1815. 1816 was known as the Year Without a Summer. But society was not yet ready for horseless transport and those connected to the horse trade – farriers, veterinary surgeons, blacksmiths – saw velocipedes, and their riders, as direct threats to their livelihoods.

And this hatred is clearly shown in Williams’s ‘Anti-dandy Infantry Triumphant or the Velocipede Cavalry’. A veterinary surgeon called Drench has knocked a dandy from his machine and is pumping him with a liquid (pitch?); a blacksmith called Anvil is smashing the dandy’s machine, and two other dandies are legging it – literally – over the hill, lest they too are prodded with pitch forks or bitten by the mutts of the locale. 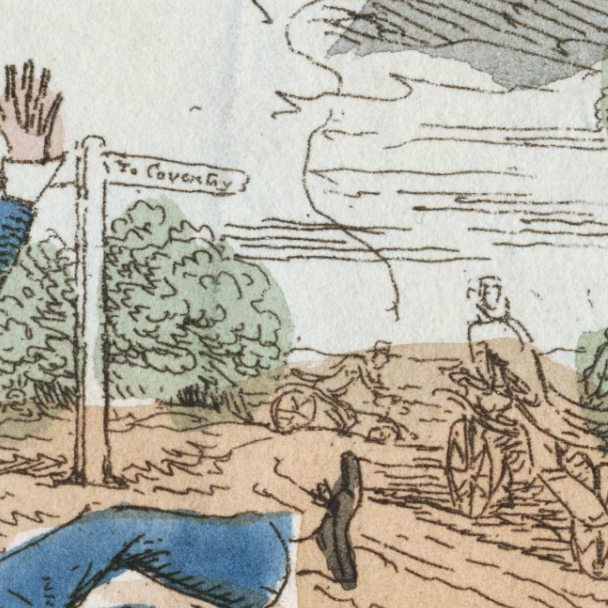 The signpost says the dandies are on the way to Coventry. This is almost certainly a reference to the idiom “being sent to Coventry”, banished.

In 1811, the meaning of the term was defined in Francis Grose’s The Dictionary of the Vulgar Tongue:

To send one to Coventry; a punishment inflicted by officers of the army on such of their brethren as are testy, or have been guilty of improper behaviour, not worthy the cognizance of a court martial. The person sent to Coventry is considered as absent; no one must speak to or answer any question he asks, except relative to duty, under penalty of being also sent to the same place. On a proper submission, the penitent is recalled, and welcomed by the mess, as just returned from a journey to Coventry.

[It’s accidentally appropriate that the artist chose this Midlands town because Coventry, of course, was, from the 1870s on, the hub of the British bicycle industry, domicile of James Starley, the “father of the bicycle industry”. In 1885, his nephew John Kemp Starley built the Rover Safety bicycle, the direct ancestor of today’s machines]. 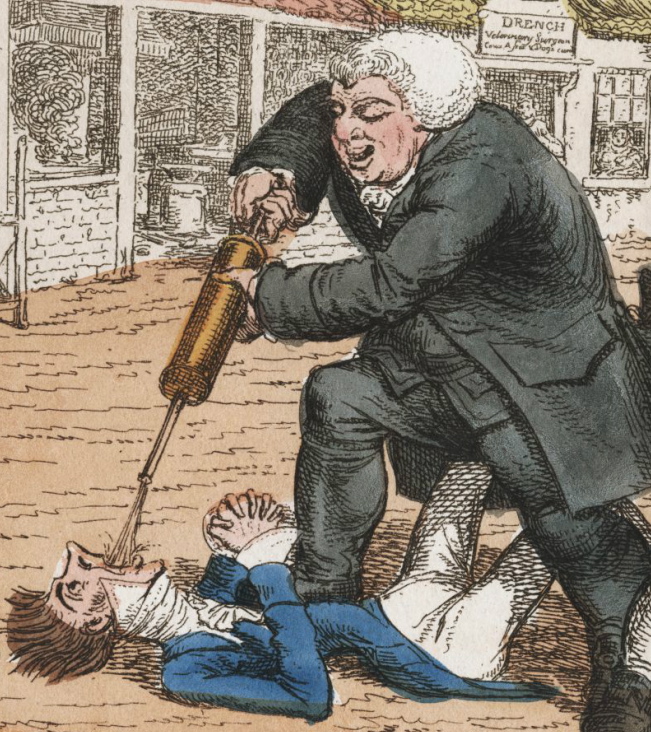 Some Regency dandies took to the countryside for long velocipede rides. But hobbyhorses, with their wooden wheels, were more usually urban runabouts, not long-distance machines. They were more suited to the smooth block pavements in towns rather than the macadamised roads of the countryside. (In 1818, Britain had 114,379 miles of highways, of which 19,275 miles were turnpike roads, many of which were well-surfaced and carried ‘fast’ stagecoach traffic: 10mph was fast).

Not that velocipedes were welcome on footways. “All cyclists ride on the pavement” has been a hate epithet since bicycling’s very beginnings (Milan banned hobby horses from the sidewalk in 1818; London and New York did the same in 1819). 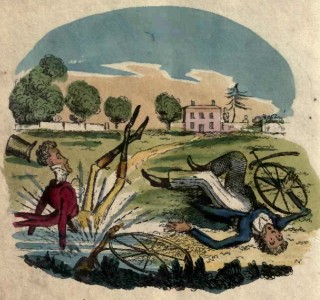 When velocipede riders did venture away from towns, they could expect rough treatment. In 1819, a dandy riding on the road to Camberwell, three miles south of London – then a pastoral village not the busy place it is today – “attracted a great crowd, from the pressure of which he was, at his earnest solicitation, extracted by a passing coachman, who carried him and his ‘horse’ off on the roof.”

Williams wasn’t the only caricaturist to ridicule velocipedists of the day. The Cruikshank brothers, George and Robert, also had many digs at dandies. George, by far the more famous and successful of the two, created the classic illustration below, showing how horses and their riders might feel about a future where velocipedes became altogether too successful: 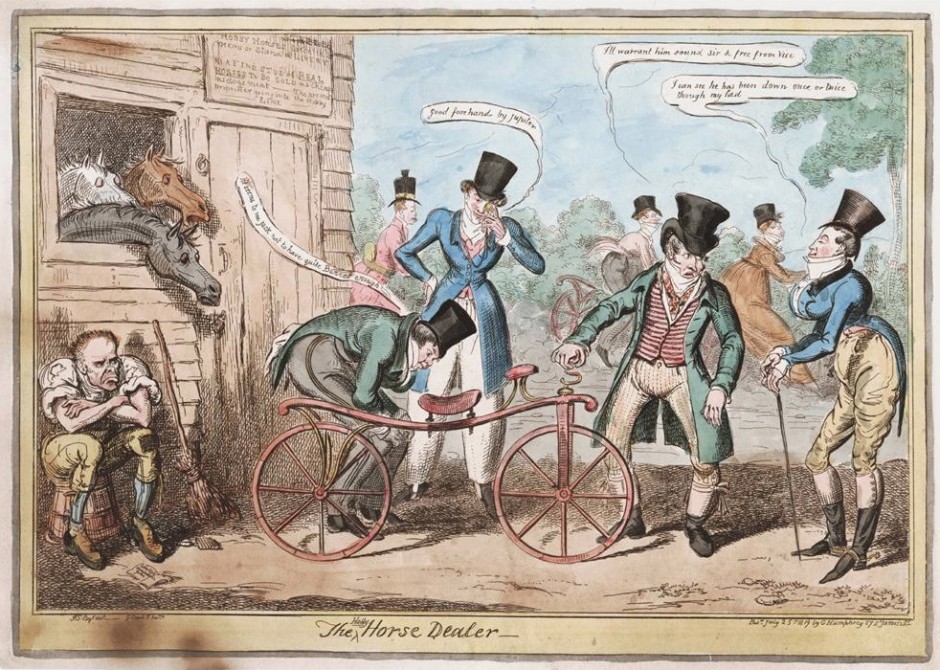 Robert, on the other hand, based his dislike of hobby horses on personal experience. He and a friend had ridden a pair of velocipedes down Highgate Hill in London, and had crashed into each other at high speed. Cruikshank’s book The Dandy’s Perambulations has gaily-dressed protagonists who are chased by geese and crash their hobbies.

William Heath also poked fun at dandies and their machines, as seen in this illustration. 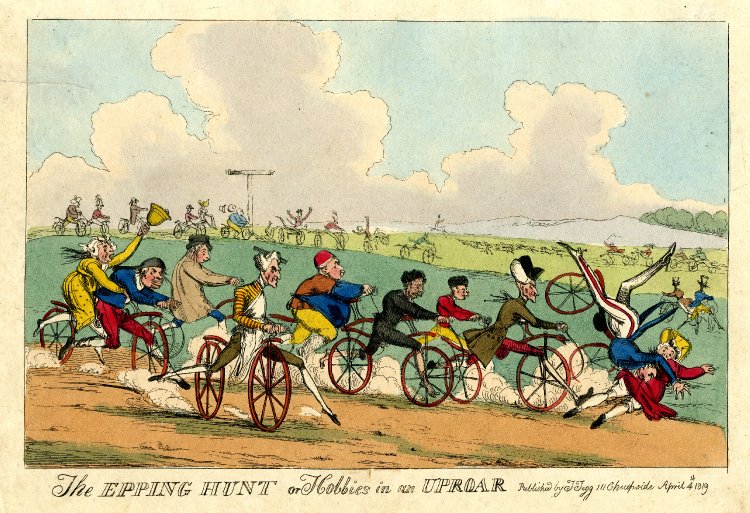 And satirists, too, poured scorn on the early “cyclists”. One wrote of:

Patent pedestrian accellerators,
Floating velocipedes, perambulators,
Or hobbies, at present which so much the rage are,
That asses from Brighton they’ll banish, I wager.

Much of the hatred aimed at hobbyhorse riders was dandy-hate rather than hobbyhorse-hate. In an 1822 ditty, A S Grenville wrote:

Said Tom to Dick, ‘the other dav,
As they stood gazing on the way;—
Why, what is that-there thing,—
There? tis strange I vow ;—
It seems two wheels with wooden spring,
Darnation! see it go!
Cries Dick, that’s called Velocipede—
A creature without tail or head,
That wants nor whip nor prick,—
There’s nought to do but on and kick,
Away ’tis gone full speed!—
And will or stage or coach outrun,
In manner wonderful, indeed!
As very often it has done.
Well ! well! but what is that astride,—
There—kicking so, and tries to ride?
Wounds! how the thing does pant for breath—
Tis dying, sure, a shocking death!
What! that,—which looks—Mere, stiff as brass?
‘Tis nothing but a-Dandy Ass!

7 thoughts on “Hating cyclists has a long, long history”