The Times is running an eight-point cyclesafe campaign to highlight the need for safer streets for cyclists. In 1898 the newspaper had had enough of cyclists – it was at the end of the Bicycle Boom – and a leader suggested that it would be a fine idea to prohibit bicycles in certain places at certain times.

Most real cyclists, too, and probably every omnibus, cab, van, and carriage driver in London, would consider that a lady on a bicycle is utterly out of place in Regent-street or Cheapside, or any other great artery of traffic. The office-boys and clerks who twist in and out among the stream of vehicles, now clinging to an omnibus for support and now darting almost under the nose of a horse, can take care of themselves, and a special Providence seems to watch over their wildest escapades; but no one likes to see a woman running unnecessary risk, as it has more than once proved to be, to life or limb.

There is, indeed, much to be said for prohibiting bicycles altogether in the City and in certain streets between, say 10am and 6pm. But whether any authority, Imperial or local, will have the courage to interfere with so universally popular a pastime and means of locomotion is perhaps doubtful.
The Times, 1898 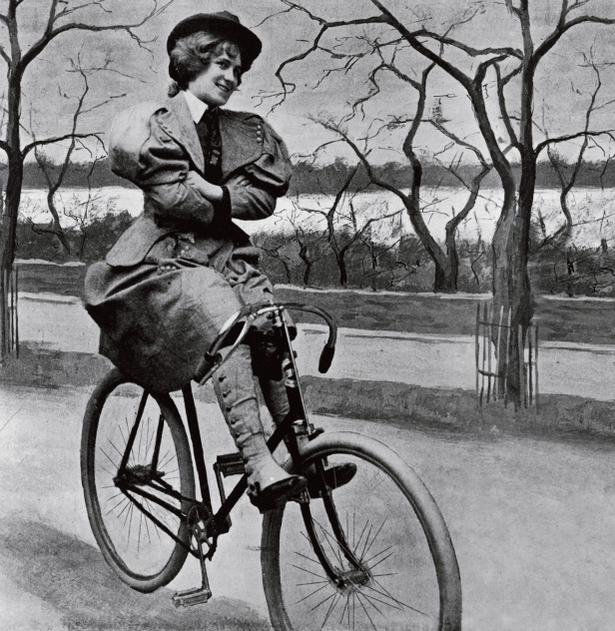 The topic of cyclists ‘sharing the road’ with heavier vehicles is nothing new. And nor is there anything new about cyclists being abused on the busy, busy roads of Britain’s cities. Watch the 1890s video above and then read this account of cycling in 1890s London by Susan, Countess of Malmesbury, extracted from The Badminton Magazine, 1896.

A new sport has lately been devised by the drivers of hansom cabs. It consists of chasing the lady who rides her bicycle in the streets of the metropolis…

Having now been the quarry of the Hansom cabman for nearly a year, and having given him several exciting runs, I cannot help feeling that cycling in the streets would be nicer, to use a mild expression, if he id not try to kill me…

I launched my little cockleshell early one Sunday morning in July into the stormy oceans of Sloane Street, Knightsbridge, and Park Lane, on my way to visit a sick friend who lived about four miles off, beyond Regent’s Park. The streets were really very clear, but I shall never forget my terror. I arrived in about two hours, streaming and exhausted, much more in need of assistance than the invalid I went to console. Coming home it was just as bad; I reached my house about three o’clock and went straight to bed, where I had my luncheon, in a state of demoralisation bordering on collapse. I only recount this adventure in order to encourage others who may have had the same experience as myself, but who, unlike me, may not have tried to conquer their nervousness.

What cured my fear was the purchase of a little shilling book called, I believe, ‘Guide to Cycling’, wherein it is written that cycles are ‘vehicles within the meaning of the Act.’ I then realised that I had an actual legal existence on the roadway, that my death by lawless violence would be avenged, and that I was not , what I had hitherto felt myself to be, like the lady, hated both of gods and men, who

‘Cast the golden fruit upon the board’-

I mean, my cycle on the streets –

And bred this change.’

Yes, I had as good a right to my life as even my arch-enemy the hansom, or my treacherous companion the butcher’s cart. I and my machine were no longer like a masterless dog, and if we were scouted from the pavement, at least we would take modestly but firmly, if need be, our proper breathing room in the road.

Cautious and alert, I merrily proceeded on my way, using my bicycle as a means of doing my morning shopping or other business.

Drivers of hansoms have various ways of inflicting torture on a fellow-creature, one of which is to suddenly and loudly to shout out ‘Hi!’ when they have ample room to pass, or when you are only occupying your lawful position in a string of vehicles. Also, they love to share your handle-bars and wheels, passing so close that if you swerve in the slightest – which, if you are possessed of nerves, you are likely to do – it must bring you to serious grief. They are also fond of cutting in just in front of you, or deliberately checking you at a crossing, well knowing that by so doing they risk your life, or, at any rate, force you to get off.

I myself always ride peaceably about seven or eight miles an hour, and keep a good look-out some way head, as by that means you can often slip through a tight place or avoid being made into a sandwich composed of, let us say, a pedestrian who will not, and an omnibus which cannot, stop.

Many a time when I first began to ride in traffic have I meekly escorted an omnibus in a crowded thoroughfare, thankful for the shelter it afforded from the wild and skirmishing jungle round me, and feeling like what I may perhaps describe as a dolphin playing round an ocean liner.

To my mind the great accomplishment for the cyclist in traffic is to be able to ride steadily, without too much wavering of his front wheel, at a very slow pace, so as to avoid getting off, and then with quick eye and judgment to make a dash where he sees his opportunity, never forgetting to look some distance ahead so as to avoid stoppages. In these cases, like all others, prevention is better than cure.

Another word I should like to say. For riding in the streets it is most essential to have one hand free, and therefore to be able to guide your bicycle with one hand; but acrobatic performances, such as riding without using either hands or feet down inclines in crowded streets, or with both feet on one side, or with your face to the hind wheel, as one man managed to do, are entirely to be discouraged.

How I admired at first the graceful way in which, a gentleman, very tall, and well known in royal social circles, took off his hat and bowed to his acquaintance on the pavement! I even envied the more humble individual whom I saw blowing his nose with reckless violence in Piccadilly; but now it seems to me that to fall would be impossible, even if I tried, and this is really the only frame of mind in which it is safe to bicycle in the streets of London.

And see also the pro-velocipede 1860s campaign in the New York Times. Oddly, this was also an eight-point plan.