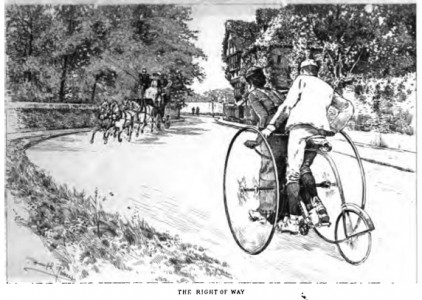 A generation after the gradual dissolution of the turnpike system, which had partially paid for the upkeep of thousands of British roads, cyclists voluntarily put their hands in their pockets to help pay for the finer metalling they craved. The Midland Road Fund was one of a number of private pots of cash, raised by cyclists, which helped pay for road repairs (others included a fund to pay for the lunches and presents for the elderly road builders of Ripley, near London). The Birmingham Daily Post of March 15th, 1884, recorded the formation of the Midland Road Fund:

A meeting of cyclists called to consider the state of the roads round Birmingham was held yesterday in the committee room of the Town Hall. The chairman said it was not an unimportant application that had brought them together. The state of the roads from their point of view as cyclists ought to be sufficient to make them join together for their improvement, but any benefits they secured for themselves in this direction would be shared by the general public, for it was not only cyclists that had to complain of the condition of the roads round Birmingham, but all who used wheeled vehicles.

[Alderman White said] “Our roads had fallen off from what they were years ago. Since the abolition of the turnpike trusts the maintenance of the road had been thrown upon the parishes who appeared to do as little as possible and what they did in their attempts to mend the road only seem to mar them. It seems a strange anomaly that in a country like ours – so wealthy and populous – there should be no national system of road making such as prevailed in Continental countries.”

If they could do something towards the establishment of a system of national road-making the movement would be one worthy of Birmingham. He had travelled a great deal on the continent and then the roads were almost perfection as our turnpike roads were becoming just before the era of railways.

Naturally, as it seemed to him, they had declined under the present system of management, and they seemed likely to get worse.

Users of roads had the remedy in their own hands to a certain extent. If the parish or other local authority having the management of the roads declined to put them in proper order, the justices of the district might order them to do so.

Mr Tyndall referred to the many complaints that have been made of late with regards to the manner in which the roads were metaled and said no one felt the bad states of the roads more than cyclists. It appeared to him there was a sad want of knowledge on the part of the authorities as to how the road should be made.

How was it the Coventry Road was always smooth to ride on when other roads when a bad state? Some of them thought that there was no reason why they they should not have all the roads around Birmingham kept as smooth as the Coventry Road.

The object of the present meeting was to introduce the authorities to put the law into force, so that the roads might be properly made. …All local clubs affiliated with the National Cyclists’ Union were requested to pay to a special reserve found to be called that Midland Road Fund that Mr Alderman White be requested to kindly act as honorary treasurer of said fund, and then it be devoted entirely to thee carrying out as such measures as may be necessary for securing the thorough repair of roads in Birmingham and within fifty miles of it.

Mr M Pryor seconded the resolution, remarking that it they could only get good roads to ride upon it should be more important to cyclists than the best propelling gear ever invented.

Mr Carslake said he believed that the Borough Authorities would require very little pressure, and justices in country districts would welcome the interference of the cyclists, as, though convinced of the bad state of roads, they did not like to take the initiative themselves.

Such a move by cyclists was welcomed by the press. An editorial in London’s Lloyds Weekly Newspaper in August 1884 said:

From the report of the case heard at the Halesowen police court, we are afraid that the highway boards throughout the kingdom will regard the cyclists as adding a new terror to existence. The public, however, will doubtless think otherwise, and will be inclined to applaud the action of the noble and ever increasing army of bicyclists, tricyclists, and other knights of the road. It appears that the surveyors of the highways for four or five parishes in Worcestershire were summoned for neglecting to keep the main road in a proper state of repair.

The real plaintiff was a bicycle rider, and ittranspired at the hearing of the case that this action was only the commencement of a crusade, which is two powerful associations – known as the National Cyclists’ Union and the Midland Road Fund – have determined to commence against the surveyors in charge of the roads in the Midland counties.

This new movement, however, while adding to an already portentous list of agitations, is not without its uses. It is also very formidable, as the highway surveyors will find, if they do not set their house, or rather their roads, in order.

The two associations already named embrace upwards of 20,000 members, who represent a still larger body of cyclists now engaged in traversing the Midlands in all directions. These cyclists, whom we may describe as running surveyors, and as self-constituted custodians of the legal custodians of the highways, are resolved that the roads be put into a thorough state of repair.

Amen, say we, while endorsing their action and through the movement now inaugurated the great body of the public will be ultimately the gainers. This policy of wheels within wheels is thus one of distinct advantage to the people.