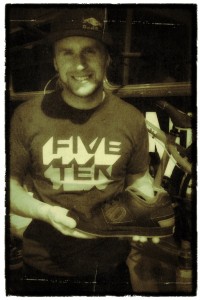 Jumping around on bicycles has a long history. Wheelmen of the 1880s rode down flights of steps, balanced on ledges and pulled the sort of tricks that would make Hans ‘No Way’ Rey wince.

And this wasn’t just on new-fangled Safety bicycles, this was on Highwheelers, or Ordinaries. (Penny farthings, if you must, but try to refrain, this was a term of Victorian abuse).

Highwheelers were so difficult to ride – and prone to so many stone-in-the-road mishaps, which was why the early cyclists lobbied to get smooth surfaces to ride on – that all riders of Ordinaries could be considered stunt riders, a point made by a journalist reminiscing in 1896:

“every rider, was in degree, a trick rider. If you could do a few simple feats, in addition to staying on, the wonder at the staying-on part increased to such an extent that people would pay money to see you.”

Bicycles have been used in acrobatic performances since at least 1868 when the Hanlon Brothers troupe used a velocipede in their act. In 1869, ‘Professor’ Jenkins used an upside-down bicycle to cross Niagara Falls on a tightrope. 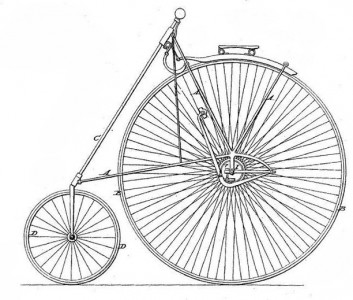 In 1886 trick riders Kauffman and McAnney pulled stunts on American Star bicycles. These were Highwheelers with the small wheel in front, supposedly for safety. One of their shows was in the Westminster Aquarium.

Kauffman used as a prop “a common strongly built kitchen table; upon it he placed two chairs, one to receive the front wheel of his bicycle and the other the hind wheel. He then mounted on the table, climbed on to the chairs, and from thence slowly and carefully, with almost imperceptible motions, balancing his unstable mount the while, crept up the spokes of his machine and finally stood upright on the saddle, at a height of twelve or fourteen feet from the ground.” 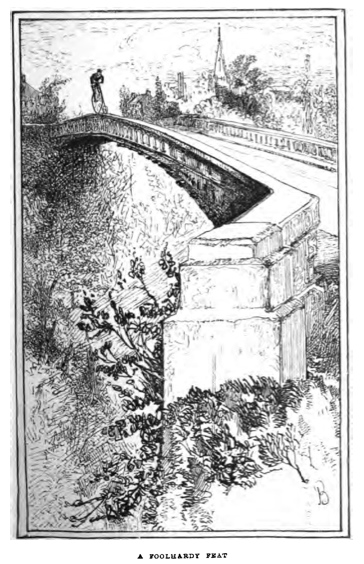 The Star was clearly the trials bike of its time as it was used by an unnamed rider, also in 1886, to ride along a bridge parapet in America. The Earl of Albemarle takes up the tale in his book Cycling from the Badminton library of sports, first published in 1887:

A daring and foolhardy feat was performed by a bicyclist the other afternoon at Cabin John Bridge, near the city…The bridge is said to be the largest single span of masonry in the world. It is 125 feet high, and about 200 feet long, a single magnificent arch spanning a deep and rocky gorge.

Every nice Sunday the sheds about the place are crowded with vehicles of every description, and sporting men, family parties, wheelmen, and gentlemen of leisure, are loafing about the house, getting country dinners or picnicking in the wild gorge below the bridge. As at all such places, there are always a few wheelmen lounging in and out, and a
number of machines were stacked about the yard that afternoon, and a lively party within could be heard telling stories and boasting of their personal skill on the road. In the midst of the hilarity one young man suddenly came out alone, and, singling out his machine, mounted, and without a word rode towards the bridge.

There is a brownstone coping on the three-foot wall on either side of the roadway. This coping is about a foot broad, and is bevelled on the two upper edges for an inch or two. On the inside of these walls is the solid roadway above the duct. On the outside is a perpendicular descent of about 125 feet in the centre of the bridge, and no less than 75 feet at either abutment. The young man stopped and dismounted at the end of the bridge and lifted his machine upon the coping. The act was noticed by a couple of gentlemen smoking under the trees, but it was looked upon as a freak, and no particular attention was paid to it. The next moment there was an exclamation of horror, for the young man was seen mounted upon his bicycle deliberately riding along the narrow coping. The sight froze the blood of the ladies and children picnicking in the gorge below, and was enough to appal the stoutest heart.

The gentlemen in front of the hotel started to their feet and called to the other wheelmen within. It was too late. The young man was already in the centre of the bridge. He never swerved a hair’s breadth from his seat. From the end of the bridge he seemed a toy machine running by mechanism, so erect and motionless he sat, and so evenly he rode.

In two places the coping makes a zigzag by the widening of the roadway, and at these places the rider must steer his wheel through a very narrow space at nearly right angles with his course. The daring fellow had passed the first of these ticklish spots, and, when he carefully wore round the second, not a single one of the horrified spectators could draw a breath for fear. From thence to the end was a short and straight run, and in another moment the young man had completed his dangerous ride, dismounted, and was waving his hand laughingly at the frightened men and women and children who had witnessed it.

The young fellow calmly remounted his wheel and rode on towards the city as if he had done a very common thing not worth mentioning.