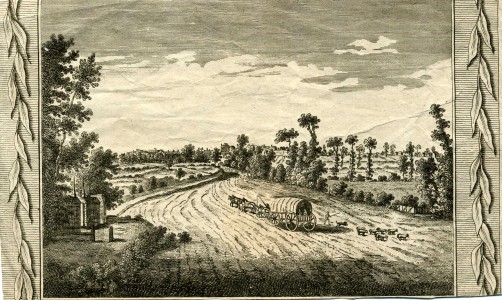 Daniel Defoe, author of the 1719 novel Robinson Crusoe, was a great traveller and, in 1724-6, wrote A tour thro’ the whole island of Great Britain, divided into circuits or journies, a valuable source of information for historians. Defoe had much to say on the state of Britain’s roads and their gradual improvement thanks to turnpike trusts. By Acts of Parliament certain roads were privatised and their upkeep handed to local groups of landowners, business owners and toffs. The pay-as-you-go tolls charged by the turnpike trusts were not popular, but the improvements to the roads were substantial (albeit nationally patchy).

In A Tour Defoe described the passing of the first Turnpike Act, in 1663, which helped improve a stretch of the Old North Road from Wadesmill, in Hertfordshire along the line of Ermine Street, the main Roman road to the north.

‘An Act for Repairing the Highways within the Counties of Hertfordshire, Cambridgeshire and Huntingdonshire’ was the start of the turnpike revolution, leading to the repair of many of Britain’s “foundrous ways.” On the best of the improved roads stage-coach speeds doubled to 10mph (hold on to your hats!) . However, with the manic popularity of the railway in the 1830s and 1840s, the macadamised turnpike roads fell out of favour and, for a generation, stagnated. In the 1880s and 1890s, cycling was the marvel of the age, with bicycles and tricycles offering a revolutionary form of transport and leisure that captivated those who could afford what were expensive and technologically advanced pieces of equipment. Thanks to cyclists, long-neglected roads came to life again

Coaching inns, in particular, welcomed the new trade, as described in a Daily Telegraph editorial of September 1880:

Not the worst thing that they have done, these knights of the road, has been to rehabilitate and set on their legs again many of our old posting-houses and decayed hostelries all over the country. Bicycles have…taken the place of coaches; they frequent all our great main roads, and gladded the hearts of innkeepers, who look out for the tinkling bells which herald the advent of a ‘club’ of wandering velocipedists, just as they anticipated of yore the gladsome tootling of the horn that bespoke the approach of the Enterprize, the Highflyer, or some other well-known conveyance of the old coaching days.

Of course, Defoe didn’t live to see the arrival of railways, or the demise of turnpike trusts, and wrote Robinson Crusoe a full one hundred years before the first wobbly velocipedes appeared on Britain’s roads (they soon died out), but he has left us a vivid description of how roads privatisation can – for a time at least – radically improve the no-longer-public highway. 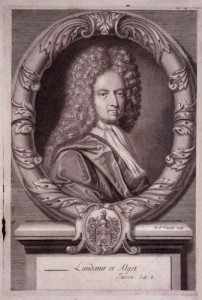 A tour thro’ the whole island of Great Britain, divided into circuits or journies

That an Act of Parliament was obtained about 30 years since, for repairing the road between Ware and Royston, and a turnpike was erected for it at Wade’s-mill, a village so called, about a mile and half beyond Ware: This proved so effectual, that the road there, which was before scarce passable, is now built up in a high, firm cause way; the most like those mentioned above, of the Romans, of any of these new undertakings. And, though this road is continually work’d upon, by the vast number of carriages, bringing malt and barly to Ware, for whose sake indeed, it was obtained; yet, with small repairs it is maintain’d, and the toll is reduced from a penny, to a half-penny, for the ease of the country, and so in proportion. But now the case is alter’d, labour is dear, wages high, no man works for bread and water now; our labourers do not work in the road, and drink in the brook; so that as rich as we are, it would exhaust the whole nation to build the edifices, the causways, the aqueducts, lines, castles, fortifications, and other publick works, which the Romans built with very little expence.

But to return to this new method of repairing the highways at the expence of the turn-pikes; that is to say, by the product of funds rais’d at those turn-pikes; it must be acknowledg’d they are very great things, and very great things are done by them; and ’tis well worth recording, for the honour of the present age, that this work has been begun, and is in an extraordinary manner carry’d on, and perhaps may, in a great measure be compleated within our memory. I shall give some examples here of those which have been brought to perfection already, and of others which are now carrying on.

This encourag’d the country to set about the work in good earnest; and we now see the most dismal piece of ground for travelling, that ever was in England, handsomly repair’d; namely, from the top of the chalky hill beyond Dunstable down into Hockley Lane, and thro’ Hockley, justly called Hockley in the Hole, to Newport Pagnall, being a bye branch of the great road, and leading to Northampton, and was call’d the coach road; but such a road for coaches, as worse was hardly ever seen. 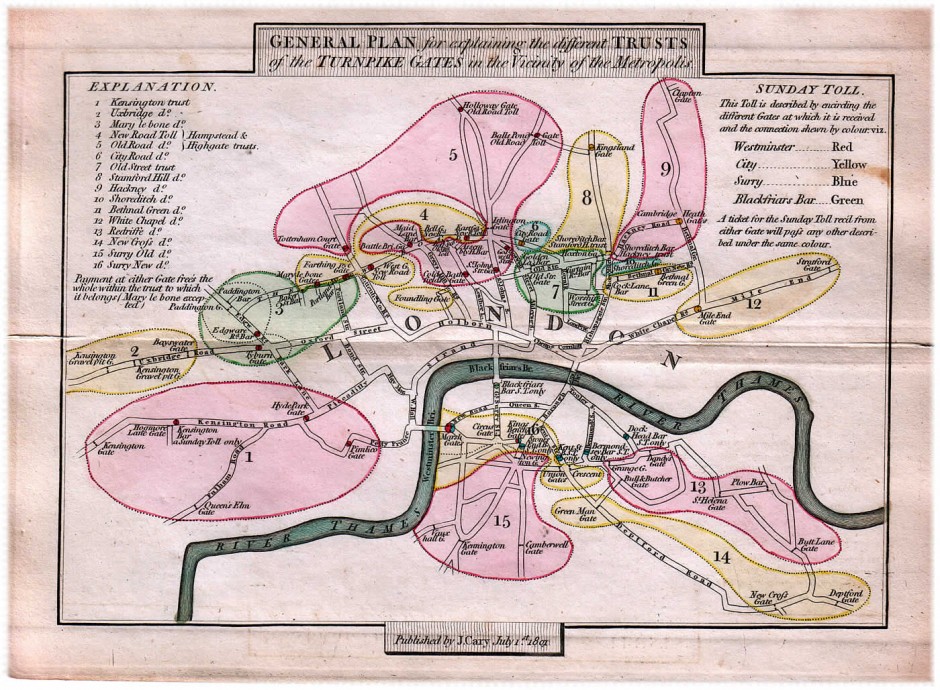 All these roads were to the last extremity run to ruin, and grew worse and worse so evidently, that it was next to impossible, the country should be able to repair them: Upon which an Act of Parliament was obtain’d for a turnpike, which is now erected at Islington aforesaid, as also all the other branches by the Kentish Town way, and others; so that by this new toll, all these roads are now likely to be made good, which were before almost a scandal to the city of London.

Another turnpike, and which was erected before this, was on the great north road, beginning at Shoreditch, and extending to Enfield Street, in the way to Ware; though this road is exceedingly throng’d, and raises great sums, yet I cannot say, that the road itself seems to be so evidently improv’d, and so effectually repair’d, as the others last mention’d, notwithstanding no materials are wanting; even on the very verge of the road itself, whether it be, that the number of carriages, which come this way, and which are indeed greater than in any other road about London, is the occasion, or whether the persons concern’d do not so faithfully, or so skilfully perform, I will not undertake to determine. The reason for my taking notice of this badness of the roads, through all the midland counties, is this; that as these are counties which drive a very great trade with the city of London, and with one another, perhaps the greatest of any county in England; and that, by consequence, the carriage is exceeding great, and also that all the land carriage of the northern counties necessarily goes through these counties, so the roads had been plow’d so deep, and materials have been in some places so difficult to be had for the repair of the roads, that all the surveyors rates have been able to do nothing; nay, the very whole country has not been able to repair them; that is to say, it was a burthen too great for the poor farmers; for in England it is the tenant, not the landlord, that pays the surveyors of the highways.

This necessarily brought the country to bring these things before the Parliament; and the consequence has been, that turnpikes or toll-bars have been set up on the several great roads of England, beginning at London, and proceeding thro’ almost all those dirty deep roads, in the midland counties especially; at which turn-pike all carriages, droves of cattle, and travellers on horseback, are oblig’d to pay an easy toll; that is to say, a horse a penny, a coach three pence, a cart four pence, at some six pence to eight pence, a waggon six pence, in some a shilling, and the like; cattle pay by the score, or by the head, in some places more, in some less; but in no place is it thought a burthen that ever I met with, the benefit of a good road abundantly making amends for that little charge the travellers are put to at the turn-pikes.

Several of these turn-pikes and tolls had been set up of late years, and great progress had been made in mending the most difficult ways, and that with such success as well deserves a place in this account: And this is one reason for taking notice of it in this manner; for as the memory of the Romans, which is so justly famous, is preserv’d in nothing more visible to common observation, than in the remains of those noble causeways and highways, which they made through all parts of the kingdom, and which were found so needful, even then, when there was not the five hundredth part of the commerce and carriage that is now: How much more valuable must these new works be, tho’ nothing to compare with those of the Romans, for the firmness and duration of their work? So that on the whole, this custom prevailing, ’tis more probable, that our posterity may see the roads all over England restor’d in their time to such perfection, that travelling and carriage of goods will be much more easy both to man and horse, than ever it was since the Romans lost this island.

Nor will the charge be burthensome to any body; as for trade, it will be encourag’d by it every way; for carriage of all kind of heavy goods will be much easier, the waggoners will either perform in less time, or draw heavier loads, or the same load with fewer horses; the pack-horses will carry heavier burthens, or travel farther in a day, and so perform their journey in less time; all which will tend to lessen the rate of carriage, and so bring goods cheaper to market.

The fat cattle will drive lighter, and come to market with less toil, and consequently both go farther in one day, and not waste their flesh, and heat and spoil themselves, in wallowing thro’ the mud and sloughs, as now is the case. The advantage to all other kinds of travelling I omit here; such as the safety and ease to gentlemen travelling up to London on all occasions, whether to the term, or to Parliament, to court, or on any other necessary occasion, which is not a small part of the benefit of these new methods.

Also the riding post, as well for the ordinary carrying of the mails, or for the gentleman riding post, when their occasions requires speed; I say, the riding post is made extremely easy, safe, and pleasant, by this alteration of the roads.