Assassins who fret over telescopic rifle sights or the latest undetectable poisons would be better to run down their prey with a car. Kill with a gun, expect jail-time; kill with a car and more times than not you’ll walk free.

It often seems that the usual laws of the land are suspended when crimes are committed on the public highway. Speeding isn’t deemed a social ill, it’s seen as a necessary consequence of our modern, over-stressed lifestyles. Similarly, financial penalties are not yet high enough to quell the number of motorists who choose to be distracted by their mobile phones. Texting at the wheel is commonplace.

Yet the desire for highway haste, and the belief that slower users of the highway should get out of the way of the faster ones, has a long and inglorious history. Road bullying was amplified by motorisation, not introduced by it.

This bullying is painfully evoked in A Tale of Two Cities by Charles Dickens.

His novel has a famous start (“It was the best of times, it was the worse of times”) and a memorable ending (“It is a far, far better thing that I do, than I have ever done…”) but the comeuppance exercised on one of the book’s baddies is notable – for me, at least – because a killer road user actually paid for his crime.

A Tale of Two Cities was written in 1859 but set in the years leading up to the French Revolution of 1789. The ancien regime is personified by the Marquis St. Evrémonde, an aristocrat who thinks peasants are “rats” and who feels the roads – his roads – should be free of obstructions so he can be driven through the streets of Paris at the greatest possible speed. When his carriage, horses driven wildly at his insistence, kills a peasant child, Evrémonde’s uncaring response leads an onlooker to stalk him, and stab him to death in his bed. (The child killer walked, the stabber was executed).

[It was] rather agreeable to [the Marquis St. Evrémonde’] to see the common people dispersed before his horses, and often barely escaping from being run down. His man drove as if he were charging an enemy, and the furious recklessness of the man brought no check into the face, or to the lips, of the master. The complaint had sometimes made itself audible, even in that deaf city and dumb age, that, in the narrow streets without footways, the fierce patrician custom of hard driving endangered and maimed the mere vulgar in a barbarous manner. But, few cared enough for that to think of it a second time, and, in this matter, as in all others, the common wretches were left to get out of their difficulties as they could.

With a wild rattle and clatter, and an inhuman abandonment of consideration not easy to be understood in these days, the carriage dashed through streets and swept round corners, with women screaming before it, and men clutching each other and clutching children out of its way. At last, swooping at a street corner by a fountain, one of its wheels came to a sickening little jolt, and there was a loud cry from a number of voices, and the horses reared and plunged.

But for the latter inconvenience, the carriage probably would not have stopped; carriages were often known to drive on, and leave their wounded behind, and why not? But the frightened valet had got down in a hurry, and there were twenty hands at the horses’ bridles. 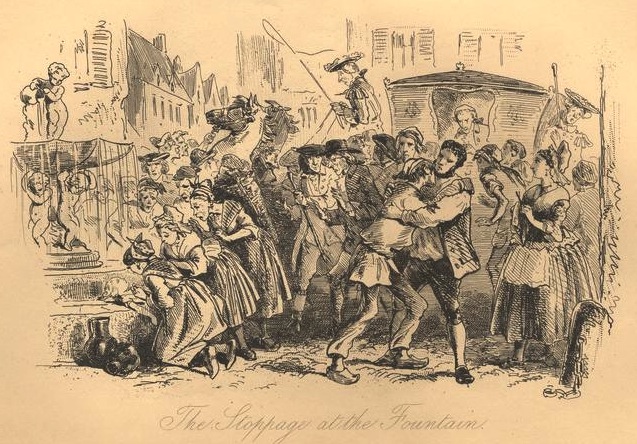 “What has gone wrong?” said Monsieur, calmly looking out.

A tall man in a nightcap had caught up a bundle from among the feet of the horses, and had laid it on the basement of the fountain, and was down in the mud and wet, howling over it like a wild animal.

“Pardon, Monsieur the Marquis!” said a ragged and submissive man, “it is a child.”

“Why does he make that abominable noise? Is it his child?”

The fountain was a little removed; for the street opened, where it was, into a space some ten or twelve yards square. As the tall man suddenly got up from the ground, and came running at the carriage, Monsieur the Marquis clapped his hand for an instant on his sword-hilt.

“Killed!” shrieked the man, in wild desperation, extending both arms at their length above his head, and staring at him. “Dead!”

The people closed round, and looked at Monsieur the Marquis. There was nothing revealed by the many eyes that looked at him but watchfulness and eagerness; there was no visible menacing or anger. Neither did the people say anything; after the first cry, they had been silent, and they remained so. The voice of the submissive man who had spoken, was flat and tame in its extreme submission. Monsieur the Marquis ran his eyes over them all, as if they had been mere rats come out of their holes.

He took out his purse.

“It is extraordinary to me,” said he, “that you people cannot take care of yourselves and your children. One or the other of you is for ever in the way. How do I know what injury you have done my horses. See! Give him that.”

He threw out a gold coin for the valet to pick up, and all the heads craned forward that all the eyes might look down at it as it fell. The tall man called out again with a most unearthly cry, “Dead!” 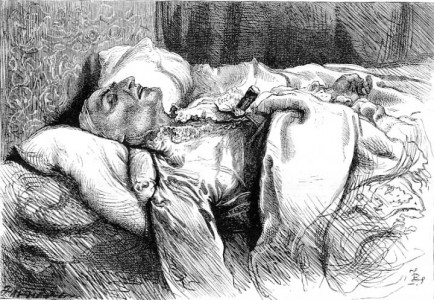 The onlookers knew that the Marquis could trample common folk under his wheels without fear. They knew “what such a man could do to them, within the law and beyond it.” But one of the onlookers, Gaspard, was a revolutionary and hid beneath the underside of the carriage as it left the scene. Dropping off close to the château owned by the Marquis, Gaspard is spotted by a “mender of the roads” but is able to hide. That night he steals into the château and stabs the Marquis to death, leaving a note: “Drive him fast to his tomb.”

Fast forward to the early 1900s and English aristocrats, in their spangly motorcars, felt the roads were theirs. Non-motorists had to jump out of the way or be squashed. This aristocratic feeling of entitlement came to be a common trait of motorists in general. Witness, today, a pedestrian crossing a road with a car bearing down on him or her. How many cars slow down when confronted with a frail human in front of them, and how many plough on regardless? Roads are seen as the rightful territory of motorists and motorists alone: all other users are alien, and worthy of little thought or duty of care.

Dickens used the violent death of the Marquis St. Evrémonde as a precursor of the Terror to come. Aristocrats were few in number and, once conditions for the majority became intolerable, a revolution occurred.

There are many more motorists than there have ever been aristocrats but in certain cities, such as London, drivers of private motorcars are in the minority. Most people get about via shanks’ pony, public transport, and cycling. Boris Johnson’s aristocratic wish to “smooth the traffic flow” – faster cars, less jams – is unachievable because it’s self-defeating (time and speed gains are eaten up by motorists attracted to the faster, less congested roads) but also has a naturally finite lifespan. Pedestrians crossing to Kings Cross station on the multi-lane highway that is Euston Road far outnumber the thundering lorries and private motorcars speeding through this notorious junction. One day the majority will wake up to the inequities they face and natural justice will force roads to be designed for people, not just motorised vehicles.

This day is very far off. But this day will come.

9 thoughts on “Drive fast to your tomb”