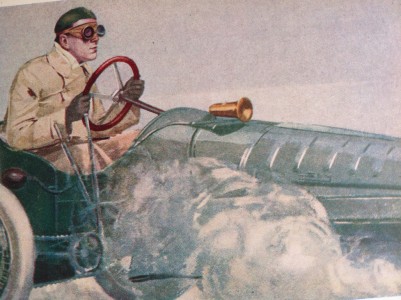 Many modern motorists glibly profess their hatred for cyclists. The automobilists of the early 1900s had no such issues with cyclists. This was because many were cyclists too, or had been cyclists before taking up motoring. The first motorcar racers, or at least the very best ones, tended to be former bicycle champions.

The bicycling boom of the 1890s led to an expansion of ownership, with secondhand bicycles enabling the British lower middle classes to gad about as never before. Prior to the boom, bicycling – and especially tricycling – had been the preserve of the rich. For a time, cycling was very much an aristocratic pleasure, although the greater expense, and greater speed, of automobiles saw the rich migrate to motor-propelled transport. Cycling became something for the masses; motoring remained exclusive for quite some years. 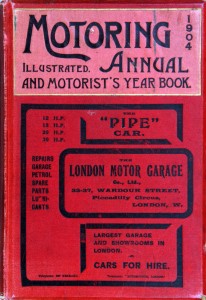 But the transition from cycling to motoring didn’t happen overnight. Who’s Who entries in The Motoring Annual and Motorist’s Year Book for 1904 showed that many pioneer motorists still listed ‘cycling’ as one of their hobbies. (Other favourites included yachting and hunting).

And pioneer motorists such as William Rees-Jeffreys were still listed as members of the Cyclists’ Touring Club. I’ll devote a great deal of space to Rees-Jeffreys in Roads Were Not Built for Cars. He was an arch-motorist, but started his professional life as a servant of cycling.

He was the secretary of the Roads Improvement Association, an organisation created by the Cyclists’ Touring Club (today’s CTC) and the National Cyclists Union (today’s British Cycling). The RIA had been formed in 1885, long before motorcars and, in 1886, organised the first ever Roads Conference in Britain.

Rees Jeffreys had started his 50 year career in the improvement of what he called “despaired and neglected roads” as a member of the Council of the Cyclists’ Touring Club. Rees Jeffreys was Secretary of the RIA by 1901 and argued that the organisation should reign back its pamphleteering of country surveyors and should instead focus on political lobbying: he wanted the cyclist-funded RIA to push for a “a Central Highway Authority and a State grant for highway purposes.”

More on Ree Jeffreys below, and in the book. For now, here’s some extracts from The Motoring Annual and Motorist’s Year Book showing mentions of cycling and also interesting asides, such as the desire of the early automobilists to be allowed to bally well drive as fast as they wanted on public highways. The public bit wasn’t stressed. Instead, roads were known as the King’s Highway, with aristocrats, naturally, having greater rights to roads “owned” by the king. (This sense of entitlement persisted long after motoring ceased to be the preserve of the rich. The entitlement syndrome still exists today, especially in the belief that private property – cars – can be stored on the public highway).

The aristocratic nature of early motoring is apparent from a lordly entry in the 1904 Year Book:

“Automobilists who desire to use armorial bearings on their cars have to pay a duty of £2. 2s.”

And the nobs didn’t just take to motors as a way of displaying their elevated social status, they professed that motoring was undertaken for the pursuit of “fresh air” and for “good health.” The “fresh air” claim was justified. Cities were dirty, smoggy places, driving out to the countryside would have been a blessed relief (and this was one of the recreational reasons cycling had been popular, too). The health claims for motoring are slightly harder to justify, although the jolting and jarring of a drive on a rough road of the time would have offered some passive exercise. As cars became easier to drive and, as roads became smoother, true sloth set in.

In 1904 there were just 8000 motorists in Britain, the most important of whom appeared in this Who’s Who.

BENNETT-STANFORD, CAPTAIN JOHN, of Pyt House, Tisbury…amuses himself with hunting, big game shooting and cricket. Is in favour of no pace limit, but would make drivers responsible for all damage to life, limb and property… “It is the bounder in cars, like the cad on castors, who gets the gentleman into trouble,” is his opinion.

BROADLEY, H. HARRISON, J.P.,…is a thorough believer in the motor as a serviceable vehicle for business as well as sport, and, though a Justice of the Peace, strongly denounces the absurd twelve miles an hour speed limit.

COLQUHOUN, DR. W. B., of Sandhurst, Becks, took to motoring as the result of a serious bicycle accident, and has never regretted the change…He is a great believer in the motor-car for medical men. 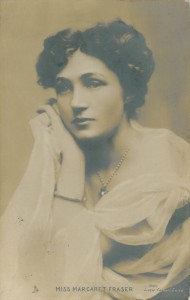 FRASER, MISS MARGARET, who, as the “good fairy” in the pantomimes, delights thousands of juveniles, is a strong advocate of motoring. “The sport is the most exhilarating form of recreation the theatrical profession can take. During a successful run, we have very little leisure for outdoor sports. I was worn out after my first day’s driving, as I fell into the same error as I had done when I began to ride a bicycle – that is to say, I clutched the steering apparatus as though my life depended on the grip.” 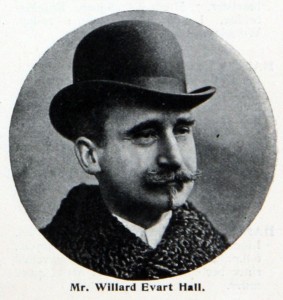 HALL, WILLARD EVART, has been more or less interested in motor-cars from the time he had his first ride on one in the Riviera…One evening when he was running at perhaps a little faster than the legal limit, a dog ran into the centre of the road just in front of him. His first impulse was to avoid the dog, and in endeavouring to do so his front wheel dropped six to eight inches into the ditch at the side of the road, and he was unable to get it out before the wheel struck the high bank, stopping the car suddenly…Mr. Hall now places more value on his own life than that of a dog, so the dogs must look out for themselves in future.

JEFFREYS, W. REES, the hon. secretary of the Roads Improvement Association, Incorporated, of 45, Parliament Street, S.W., is an enthusiastic motorist, and a very busy man. He is a member of the Automobile Club of Great Britain and Ireland; a member of the Council of the Cyclists’ Touring Club, and of several of its standing committees, including those concerned with motor-cycling, foreign touring, and legal and Parliamentary matter, and also chairman of the Metropolitan District Association. Mr. Rees Jeffreys has toured awheel in eleven countries; and has cycled over twenty-eight of the Alpine passes…As the result of his efforts to reform the existing system of highway administration, the Government have promised an official enquiry into the present methods of making and maintaining roads. Mr. Jeffreys believes that the motor- problem is a road problem to be solved only by the construction of roads suitable for rapid traffic along which motor-cars may travel without being subject to any artificial limits of speed. In December, 1902, he put forward a scheme for the construction of eleven new main roads out of London, and a boulevard round it…His recreations are motoring, cycling, boating, tennis, chess, and the study of public affairs… 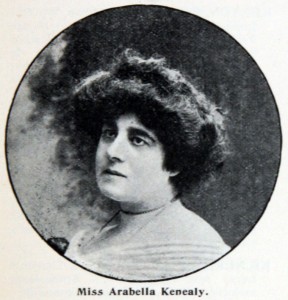 KENEALY, MISS ARABELLA, L.R.C.P. and L.M., the well-known novelist, is a great advocate of motoring for women. Her notable articles ” Woman as an Athlete”…showed that the modern cry for athletics for women is deteriorative of health and injurious to the race. Miss Kenealy’s strenuous stand has done much to stem the tide in this direction. She is advocate of automobilism for women. The exhilarating, wholesome influences of sun and air, the delight to eye and mind of scenery and nature’s beauties all, thus obtainable, without that exhausting muscular exertion she deprecates.

KOOSEN, J. A., of Sussex Place, Smiths, being extremely devoted to all out-door sports, embraced motoring with ardour. He…finds motoring of exceptional value as a cure for insomnia and other nervous affections. 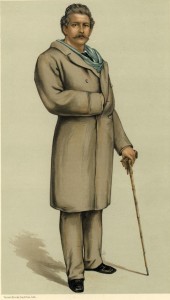 LAWES, SIR CHARLES BENNETT, BART., was an expert amateur bicyclist before he took to motoring. He journeys on his car daily from his town house to the beautiful old family place, Rothampstead, Herts, and his average speed on country roads is twenty-seven miles an hour.

LOWE, DR. G. N., of Castle Hill House, Lincoln, says he was the first to introduce mechanical highway traction— by means of the bicycle — into Lincoln.

[The Motor Car Act of 1904 set the speed limit at 25mph, much to the annoyance of the motoring organisations of the time who had argued it was perfectly safe for a gentleman to drive extremely fast on open roads]. 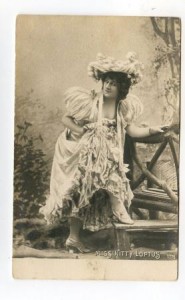 LOFTUS, MISS KITTY, claims for motoring that it is a healthy recreation, a thorough tonic, and sleep producer and for “nerves” she considers motoring to be the one thing needful. The attractive posters advertising “Naughty Nancy” exceeding the legal limit on a motor-car excited the fury of some of the provincial police.

LONG, RIGHT HON. WALTER H., M.P., as President of the Local Government Board, Mr. Long has an important interest for automobilists. His department has great power to make or mar the pleasure of motorists in the use of the road, and it is somewhat of a comfort to them to know that Mr. Long is a good all-round sportsman. A keen huntsman, and possessed of the instincts which enable him to enjoy the delights of quick motion, Mr. Long is generally credited with a leaning towards the extension of the present speed limit for motor-cars…A gentleman of his temperament would soon range himself on the side of the motorist who, whilst desiring to keep within the law, yet sees no crime in putting on pace on an otherwise deserted road. 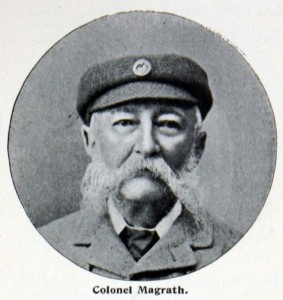 MAGRATH, J.P., COL. JOHN RICHARD, who lives at Bannaboo, near Wexford, is an automobilist who has a very poor opinion of some of his fellow magistrates when adjudicating upon motorists’ speed cases. “My opinion is,” says Col. Magrath, “that a number of silly, narrow-minded, nervous, and prejudiced old women on the Bench and in the County Councils are keeping back an industry which, if allowed fair play, will prove of incalculable advantage to our country.”

MARSDEN, BENJAMIN, of Wensley, Heaton…drives to benefit his health.

MAYHEW, MR. MARK, L.C.C. The London County Council member for Wandsworth, and the Vice-President of the Automobile Club…believes in motoring because it is a healthy recreation, affords increased facilities for workers to live outside towns, saves wear and tear of roadways, ensures cleanliness of streets and reduction of noise.

PORTSMOUTH, THE EARL OF, although he does not personally drive his motor-cars, is a keen motorist, and owns several cars. The Earl does not like the present speed limit, and has sped — under Mr. S. F. Edge’s skilful guidance — at fifty-six miles an hour along Hampshire roads.

STANFORD, CAPT. JOHN BENETT, Pot House, Tisbury…believes in the numbering of all cars, and thinks that all gentlemen observe the speed regulations honourably. 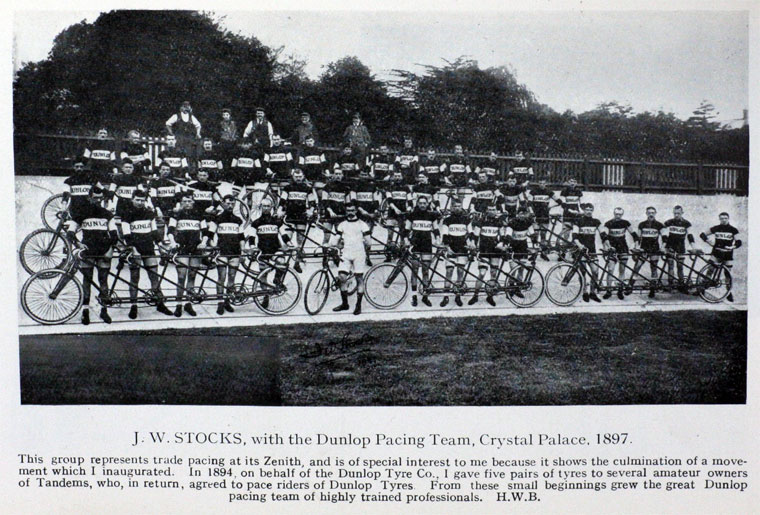 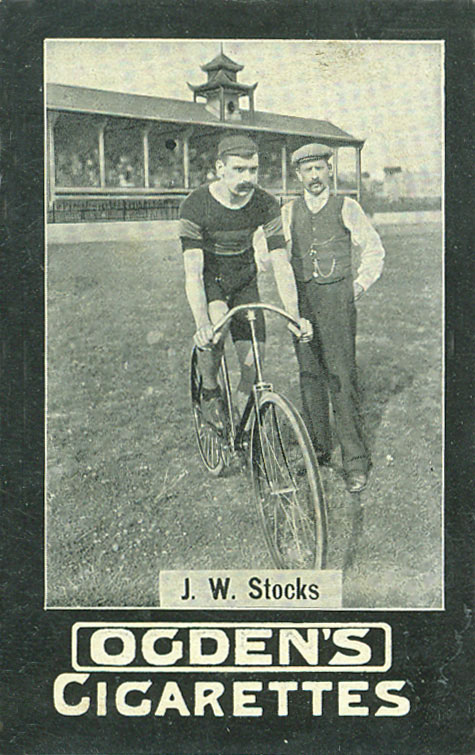 STOCKS, J. W., after ten years of successful racing on the cycle path, turned his attention to motoring… His first cycle race was at Hull, in 1888, when in his seventeenth year, but it was not until 1893 that he distinguished himself, by winning the twenty-five miles N.C.U. championship, at Newcastle, against the best riders of that time. In the autumn of the same year he covered the then marvellous distance of twenty-five miles in the hour, on Herne Hill track…Although he looked askance at the new method of locomotion for some time, having depended upon his muscular efforts for so long, he was eventually induced by Mr. S. F. Edge to try that gentleman’s motor tricycle, and after the first ride he caught the fever…and has practically done no leg-cycling since.