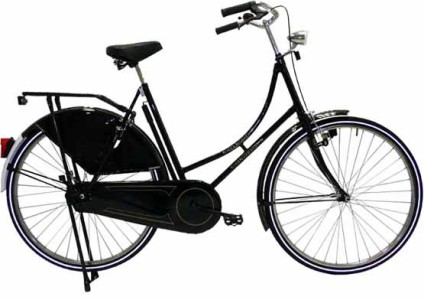 The Dutch bike – the omafiets, or grandmother bike – seems to be as Dutch as tulips and clogs. Just as tulips and clogs are not Dutch (tulips were first commercially grown in Persia and wooden shoes are global) the omafiets is Dutch in name only. The two-wheeled Dutch national icon is, in fact, English in origin. Specifically, it’s an English roadster of about 1897, preserved in aspic by Dutch bicycle makers around about 1911, the date when the Netherlands became the top cycling nation in the world, with more bikes owned per head than anywhere else. Known as the Hollandrad in Germany – a heavy, robust, sit-up-and-beg utilitarian bike – the Dutch bike was a robust refinement of John Kemp Starley’s Rover Safety bicycle, recognisable as a modern-style bicycle by 1888. Most of the features of the ‘Dutch bike’ can be seen in the women-specific English roadsters of the late 1890s, with skirt-protectors, mudguards, sweeping frames and tall handlebar stems. Below I’ve embedded some illustrations of such bicycles from England’s The Rambler magazine of 1897 (there’s more period illustrations in this Flickr set). The bicycle at the top of the piece is a Dunlop Ladies bicycle of 1897. The black omafiets below it is a modern Dutch bike.

History of design professor Timo de Rijk says, in De Nederlandse Fiets by Zahid Sardar, “the familiar black city bike is not of Dutch origin: the basic Dutch fiets is nothing more than a perfected British ‘safety bike’.”

Kaspar Hanenbergh, a bicycle historian (and Controller of the real estate and facility management department at the Netherlands Ministry of Foreign Affairs, based in The Hague) says the Dutch did nothing innovative in bicycle design:

“You will not find the name of any Dutchman or Dutch company in the list of ground-breaking patents surrounding the bicycle’s stepping stones of development.”

While the Dutch made no breakthroughs in bicycle technology, they took to the bicycle like no other nationality. Social historian Anne Ebert believes the Dutch bike is an “important object for Dutch national identification” and that:

“The tremendous success of the bicycle in the Netherlands can be at least partly explained by the particular way in which the bicycle was constructed and conceived as a promoter of Dutch national identity. To be Dutch meant to cycle, and this viewpoint remained prevalent until the Second World War, and – arguably to a lesser degree – remains so to this day.”

Timo de Rijk believes the popularity of the plain, black omafiets (or opafiets, grandfather bike) was because, at the time, it was cheap, practical and unfashionable.

“This likely had something to do with the Calvinist national character,” says de Rijk. “So that the Dutch bike was simple and sober from the outset and hardly changed in form over succeeding decades…Dutch bicycle makers [chose to] explicitly not improve the bicycle. [This was] an ingenious marketing strategy. Many makers did their utmost to promote the Dutch bike as the original model, the qualities and added components of which needed no improvement.”

Thanks to puritanical Calvinism, Dutch people tend to be less materialistic and less status-orientated than Brits or Americans and there has never been any stigma of using “poor mans’ transport”, argues Dutch ‘interculturalist’ Jacob Vossestein, author of Dealing with the Dutch: “As the Dutch are not ‘into’ status games, cycling becomes a very egalitarian means of transport.”

Even though they own plenty of cars, Dutch people will still cycle, says Vossestein, even in foul weather: “Exposed to wind and rain on a regular basis – drudging against gale force eight on unsheltered dike roads – any difference in status or social stature between cyclists is soon eradicated, revealing the essence of life: a body struggling with the forces of nature.”

The Dutch national character is a major factor why cycling is so popular in the Netherlands, believes Shirley Agudo, author of Bicycle Mania Holland:

“Cycling is a way of life in the Netherlands. It’s second nature…Practicality and day-to-day bicycle usage go hand in hand in the Netherlands; indeed they are the cornerstones of life in this traditionally Calvinistic nation. The Netherlands is the only nation in the world with more bicycles than people. In a country with 16.5 million people, there are roughly 18 million bikes. In Amsterdam alone, there are approximately 550,000 bikes versus 215,000 autos.” Above, interior of bicycle dealer A.P. de Graaff, in Haarlem, the Netherlands, 1916

Foreign bicycles were sold in the Netherlands in the early 20th Century – including Raleigh from England and there were many imports of cheap bicycles from German brands such as Adler – but these were often characterised by Dutch bicycle makers as flimsy, flighty machines not suited to the Dutch national character. The Netherlands contributed little to bicycle technology but there were many indigenous bicycle makers. Gazelle, the leading Dutch bicycle brand, was created by Willem Kölling in 1892. His first omafietsen was a direct copy of an imported English sit-up-and-beg bicycle. (Gazelle later imprinted itself into the Dutch national psyche thanks to a little boy on a Dutch bike, Piet Pelle. This cartoon character was created in 1908 and, according to Sardar’s De Nederlandse Fiets “helped instil a deep-seated love of bikes in Dutch children and the nation. Pelle books were nearly as widely circulated as the Bible. [Pelle] had the far-reaching effect in grooming an entire nation to think of bikes as essential to progress.” There’s a sweet 1930s video of one of Piet Pelle’s adventures on YouTube). 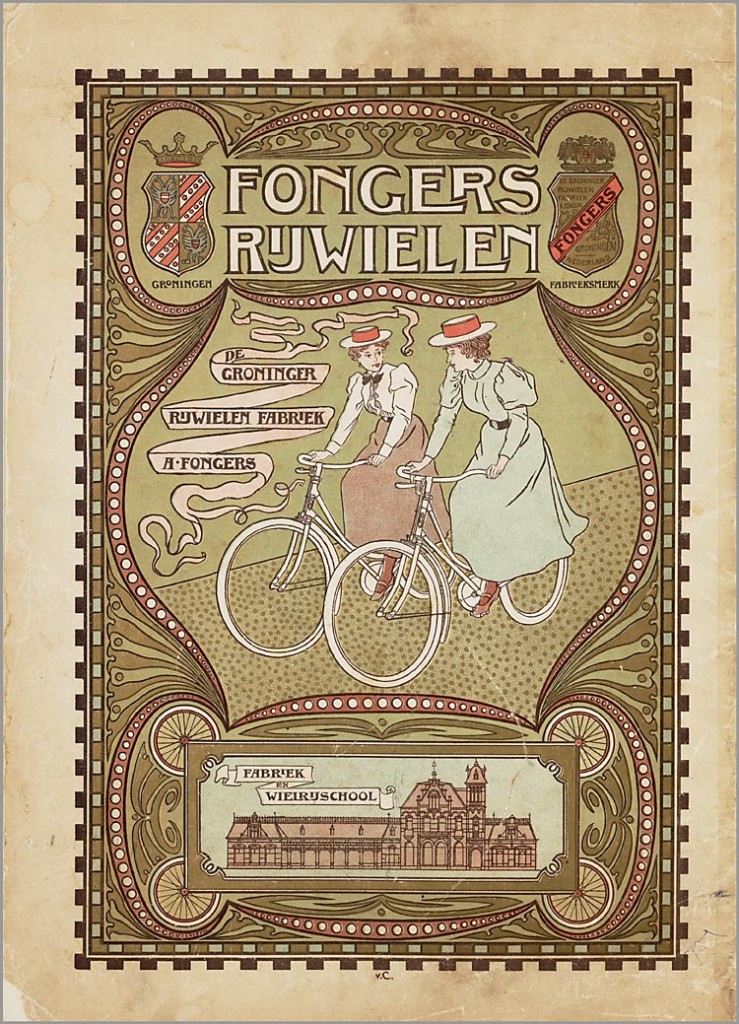 Albert Fongers, a smithy by trade, started making copies of Starley’s Rover Safety in the early 1890s. Fongers, the brand, was based in Groningen, now perhaps the most bicycle friendly city in the Netherlands. Dutch royals favoured Fongers bicycles, with Queen Juliana (who reigned from 1948 to 1980) riding this particular Fongers omafiets: And here’s Queen Juliana riding this bicycle during a visit to Schiermonnikoog in 1967: 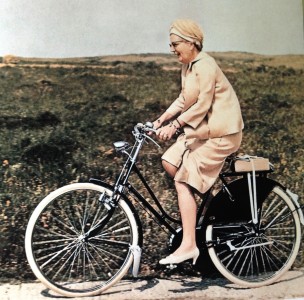 Juliana’s mother, Queen Wilhelmina, was also an active cyclist, as were and are many other members of the Dutch Royal family. Wilhelmina reigned for nearly 58 years, longer than any other Dutch monarch, but could only cycle once she was in her thirties due to her German mother thinking cycling was not fit for a queen. (During her exile in the UK during the Second World War, Queen Wilhelmina rode her bicycle on the country lanes around her house in South Mimms. She left her omafiets behind when she fled from the Netherlands, the bike she rode in Britain was an English roadster, bought from a bike shop in Maidenhead). Another ‘royal’ who later in life rode an English lightweight roadster was actress Audrey Hepburn. She was the daughter of a British businessman and Baroness Ella van Heemstra, a Dutch aristocrat. In Roman Holiday, the 1950s movie which brought her much international acclaim, Hepburn played Princess Ann, a European royal. Half-Dutch, Hepburn was pretty much born on a bike. She lived in the Netherlands during part of the Second World War and rode her omafiets for the Dutch resistance: “I stuffed [illegal leaflets] in my woollen socks in my wooden shoes, got on my bike and delivered them.” With a cycling monarchy, a wildly popular bicycle-based cartoon character and 100+ years of national identification with cycling, it’s not surprising that Dutch people remain so attached to the omafiets. The Dutch took an English innovation and claimed it as their own. (The bakfiets – or box bike – isn’t Dutch either, a huge variety of cargo bikes were made in England in the 1890s).

Sturdy, practical bicycles were marketed and sold in the UK post-1911, as shown by the rather gorgeous Raleigh poster of 1922, but, steadily, as motorcar sales rose in the UK, cycle use declined, especially for daily transport. 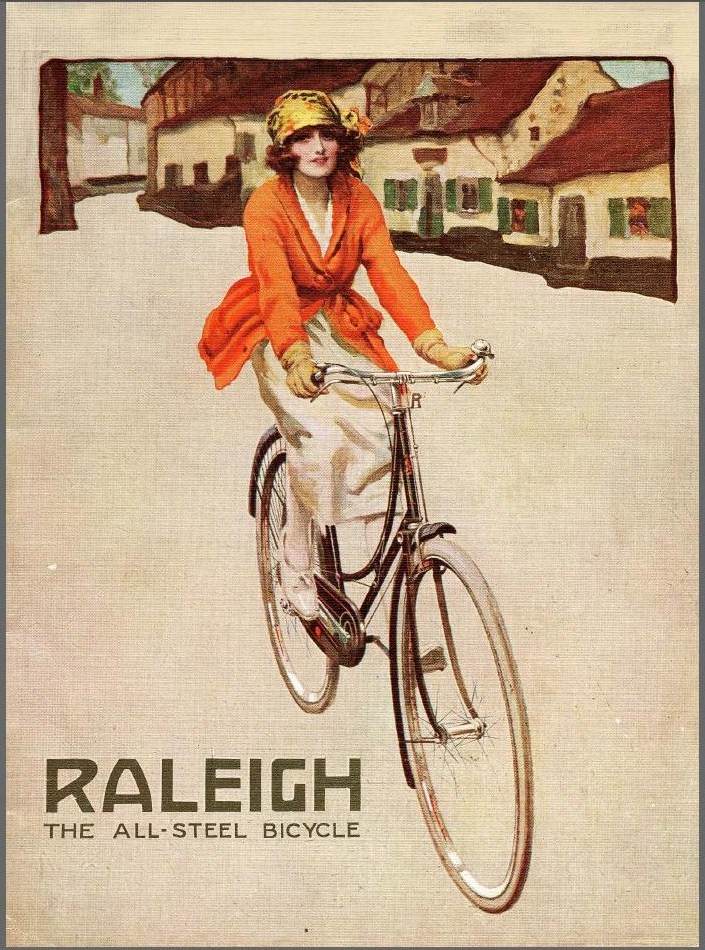 Today, in the UK, give or take a few trendsetters, it’s pretty tough to find bike shops which stock English-roadsters-preserved-in-aspic-from-1911. Perhaps if Brits are to ‘Go Dutch’ we’ll have to reclaim the omafiets as our creation? As these images from the The Rambler in 1897 attest, such bicycles seemed attractive to Brits back then.