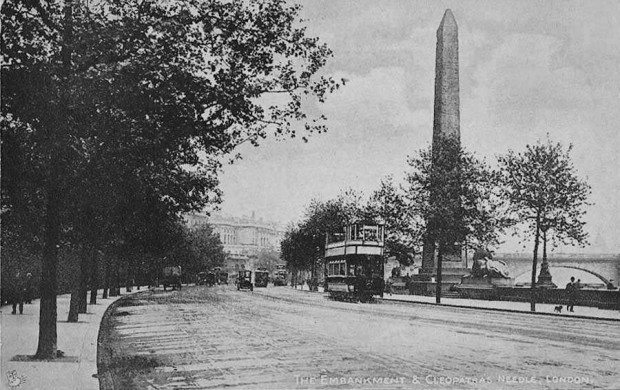 In different eras Britain’s roads have been dominated by pedestrians, waggons, bicycles, trams, omnibuses and – latterly – motor vehicles. Researching the past shows us that things change. The hegemony of the car is taken for granted today, but it isn’t a given. Nothing is set in stone (or tarmac). The urban highways of the future don’t have to be dominated by motorised vehicles. Motor-centrism was one of the defining aspects of the 20th century but finite space, climate change, whole-population health, and air quality issues mean that engineers will increasingly have to design for more people-centric towns and cities.

Now, in some cities, re-imagining who and what roads are for could mean the reintroduction of the tram (it’s already happened in Manchester, which was the first city to rip out its tramlines to cater for the car) but it will be far easier and cheaper to design for the bicycle, and for pedestrians. This is what London decided to do, and the protected cycleway and wider sidewalks on the Embankment, close to the Houses of Parliament, are shining examples of how to cater for non-motorised transport.

London catches up with the 21st century. At long last. Only 300yds so far but wow. Oh, and the sun's out pic.twitter.com/omSqusluiD 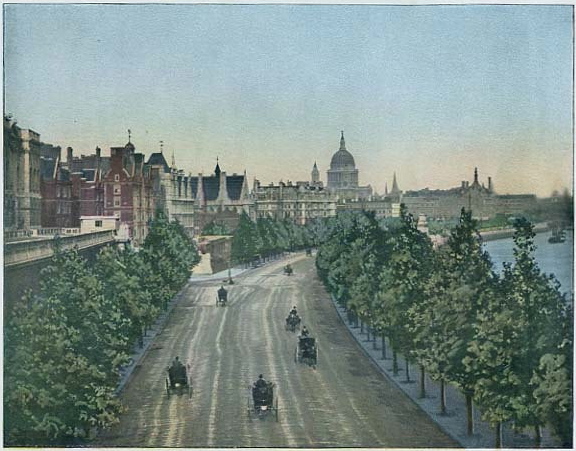 Naturally, there has been much chatter about the traffic delays caused by the construction of the wide Embankment cycleway. Yet, how many of those complaining about the reimagining of the Embankment realise it wasn’t designed for motor cars and that sixty years ago the Embankment was dominated by trams? At first there were horse-drawn trams, later there were electric trams. Each was opposed by motor interests. An 1898 editorial in the The Automotor and Horseless Vehicle Journal opined: 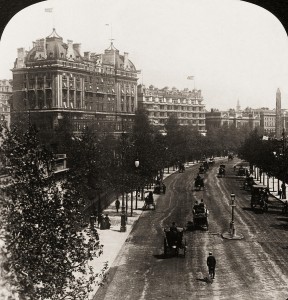 “There are certain districts and streets in which certain types of vehicles are suitable, but the Thames Embankment is not, we submit, the place for horse tramcars. To disfigure the most magnificent boulevard in Great Britain, if not in Europe, by the hideous, obsolete, horse-drawn street car is an absolute outrage upon the community.

“Every one, with any sense of the beauty attaching to noble structures situated amid scenes of considerable natural beauty, will, we are sure, agree with us in our contention. Why should we make one of our very few handsome thoroughfares…depressingly ugly? Rather let us beautify where we can; our streets need it badly enough. The reason for this attempted desecration of the Embankment is merely ‘to give facilities to the teeming population of South London to reach their employment in town.’ This is…no justification for the aesthetic outrage complained of. The only vehicles, in our opinion, which should be permitted to use the Embankment, or which can use it without jarring upon one’s sense of the fitness of things, are high-class motor-carriages, pair-horse carriages, private cabs, and cycles; all other vehicles constitute an eyesore and are an offence.” 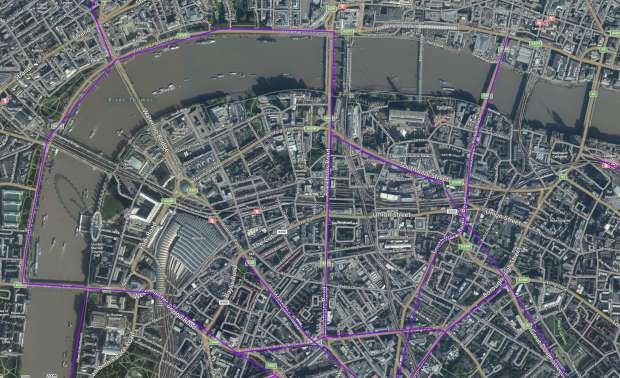 The Embankment’s wide carriageways and generous sidewalks were a happy side-effect of the installation of a wide-bore sewer which, among other benefits, reduced the stench from the Thames, a long-running complaint from the occupants in the nearby Houses of Parliament. It may have been built in the 1860s as a covering for much of London’s crap, but the Embankment was laid out as a posh boulevard, with access restricted to high-class carriages and, later, bicycles. 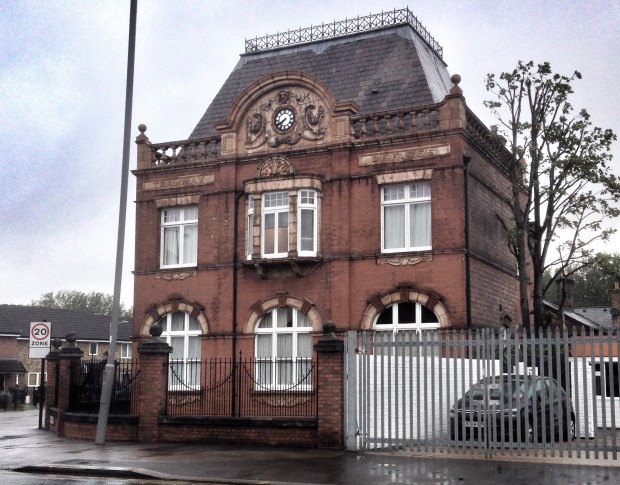 Walthamstow now has a Mini-Holland public realm improvement scheme – it used to be a major node on London’s tram network, as the signs on this extant building attest.

By the early 1900s the road was reimagined again, with steel rails laid for trams. These lasted for about sixty years. During “Last Tram Week” in July 1952 Londoners took their final tram rides, including on the well-used service which ran on the Embankment. The death throes of London’s trams were captured in an evocative period film, “The elephant will never forget”. This starts by showing the wooden logo-statue for the Elephant and Castle pub, and reminisces about what London had so recently lost. There are also fleeting glimpses of the tram service on the Embankment.

London’s tram lines were ripped out for a number of reasons, including deliberate under-investment, a belief that diesel motor-buses would better serve Londoners, and a desire to get trams “out of the way.” As the film suggests, many motorists believed that trams were a leading cause of congestion. “The motorist who every day cursed every time he had to stop cursed but little and looked forward to tomorrow,” said the film’s narrator, optimistically.

Trams and cyclists didn’t always mix well, and cyclists were among those championing the removal of tram lines. In a letter to the CTC Gazette in 1949 a Mr. Smallwood, referring to Birmingham’s, wrote:

“Leeds has tram tracks wide enough to allow cyclists that extra bit of scope for cutting across the lines and straightening up; but in Birmingham, there are narrow- gauge tracks and, in most places, wood setts. That makes a great deal of difference, and in wet foggy weather a cycle requires a great deal of careful handling when braking on wood blocks and crossing tram lines, though travelling in a straight line. Moreover, in wet weather, the tramlines collect water after a storm, as every car passes it splashes water on to you. I shall therefore be glad to see the tramlines removed.” 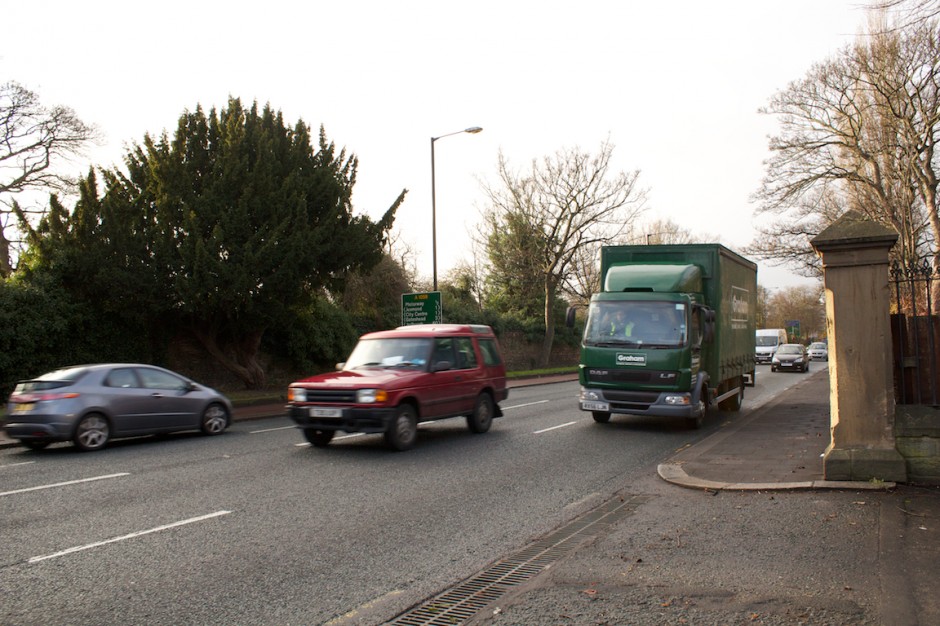 Most British cities – including my home town of Newcastle on Tyne – were once laced with tram lines. One of Newcastle’s main tram lines was on Jesmond Road, close to my home. Today, most people assume this wide, four-lane highway is an extension of the city’s 1970s motorway network and was made to this width for cars but, in fact, Jesmond Road has been this wide since it was laid out in the 1840s. This stretch of Jesmond Road is now often rammed with speeding cars and thundering HGVs, so rammed that it’s not a pleasant road to cycle on. Most who cycle to town in this direction divert on to the curving, narrower, much older Sandyford Road, a less direct route. Jesmond Road in its Edwardian heyday. The tramlines are indented with granite setts, lots of cyclists have clearly been using the macadamised strip of road. Macadam is crushed stone. Jesmond Road got its first surface of tar macadam after WW1.

From maps and photos it can be seen that Jesmond Road used to have tram lines on it. The tramlines in Newcastle were extensive and took up a fair bit of roadspace. British tram tracks were 1.4+ metres wide, copying the width popularised by local lad and world-changer George Stephenson. His ‘standard gauge’ of 4 ft 8-and-a-half inches was used on the Liverpool to Manchester railway in 1826 (his North Tyneside wagonway from Killingworth colliery to the staithes at Wallsend, built in 1814, used a 4ft 8in gauge).

It’s clear from maps, plans and period photographs that there was once plenty enough road space in British cities for trams, bicycles and cars along the same roads. If that’s the case, there’s easily enough room to accommodate wide bike paths – as well as wider footpaths – alongside the main arterial roads today. 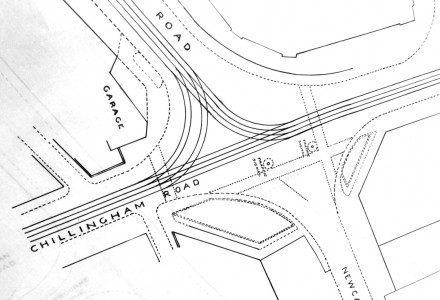 City engineers, transport planners and politicians who say there’s not enough room to install Dutch-style bike paths on British roads don’t know their history. They should go take a look at archive photos, and dig out the highway plans drawn up in the 1880s to the 1930s. The map on the left is from the 1920s and shows the tramlines along the middle of Chillingham Road in Newcastle.

On the tramways map of Newcastle, below, a planner has inked in the type of road surfaces laid beside the city’s tramlines and, when the full 1899 map is in view, the colour coding shows that the tramlines are on the main commuter routes clogged with cars today. These are the most direct routes to and from Newcastle, and without cars, they would be the routes cyclists would also choose to use. It’s these main arterial routes that would most benefit from wide, protected cycle paths. 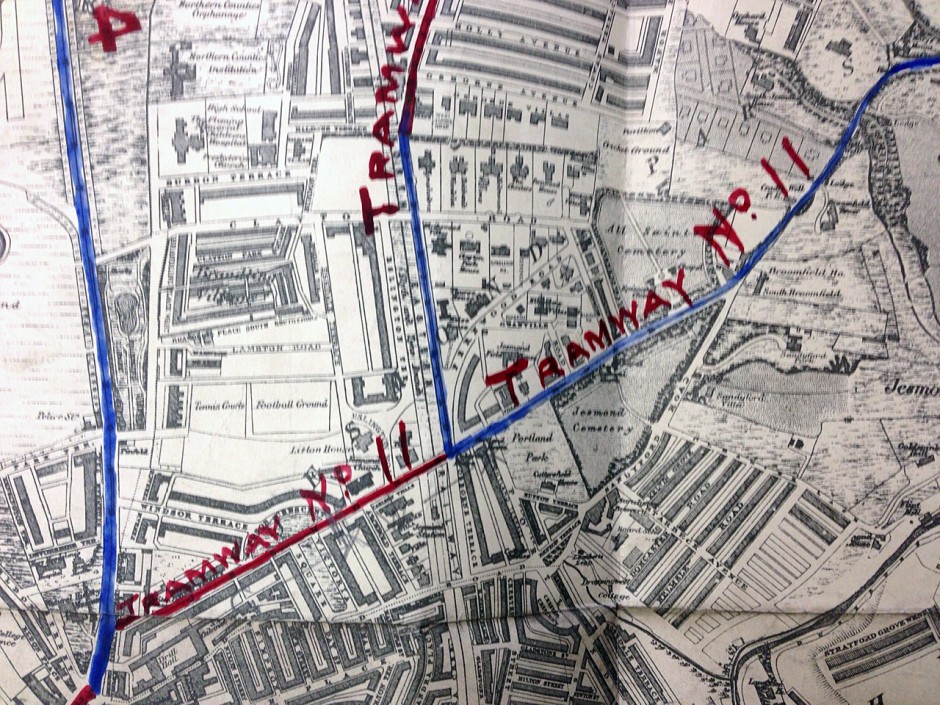 Clearly, re-engineering some of our roads won’t be easy, but it’s been done many times before, as the photographs below demonstrate.