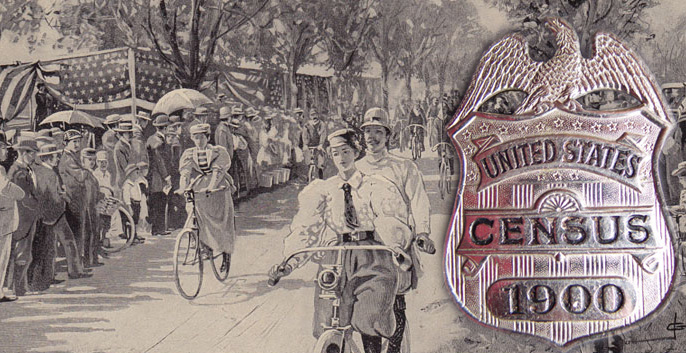 The twelfth census of the United States was taken on June 1st, 1900, and the published version was a mammoth tome. A full 16 pages of this tub-thumper of a publication were devoted to bicycles and bicycling; just five pages were devoted to the emerging automobile industry and even then cycling got a mention because, according to the census, “bicycle factories figure largely in the industry.”

The sixteen page special section lavished praise on the bicycle:

“It is safe to say that few articles ever used by man have created so great a revolution in social conditions as the bicycle…Lord Charles Beresford once said, “Whoever invented the bicycle deserves the thanks of humanity,” and no expression was more fit. The bicycle has been the means of bringing out for exercise in the open air millions of persons, men and women, young and old, who otherwise would have confined themselves to homes, stores and offices…The very wide use of the bicycle led to the formation of the League of American Wheelmen, with memberships, at one time, of more than 100,000; and this organization started the agitation for better roads, which led, in many states, to great improvements in public highways.”