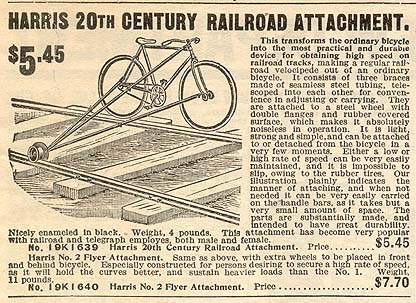 In the early years of the 20th Century, Sears Roebuck & Co. sold a device “popular with railroad and telegraph employees, both male and female.” The Harris 20th Century Railroad Attachment promised to make a “regular railroad velocipede out of an ordinary bicycle.”

It was “absolutely noiseless in operation”, an attribute one might think of lesser importance than being told how quickly it can be removed from the railroad when a train comes hurtling around the bend. The braces-and-steel wheel attachment cost just $5.45, although a sturdier, nipper version could be had for $7.70.

Rail biking never caught on in the numbers anticipated but it’s – ahem – a branch line of cycling that still exists. Dick Smart was still selling his Railcycle a few years back and, according to a rail bike website, “has already sold 10 of these to the world-famous London Underground Railway for use by London Underground engineers and track workers.”

And this video from 2011 shows that you can create your own rails-to-trails operation without ripping up the rails. A product for the Sustrans shop, perhaps?

The first rail bikes were created because it would be such a waste to allow such infrastructure to be used by trains only. 19th Century roads – both in America and Britain – weren’t always terribly good. Some were downright unusable for much of the year, especially in rural America.

This is explored in the latest Bike Show podcast, a half-hour interview with cycle historian, David Herlihy, of America, author of the classic Bicycle: The History.

In 1892 a young accountant from Pittsburg, USA, quit his job and set off to cycle solo around the world. Frank Lenz rode a Rover Safety Bicycle, a revolutionary new design that would soon consign the traditional high wheeler – or penny farthing – to obscurity. It was the birth of the bicycle as we know it today. And Lenz is one of the pioneers of cycle touring. Cycling historian David Herlihy’s latest book tells the story of his courageous, extraordinary and ultimately ill-fated journey.

David recently sent me The Lost Cyclist: The Untold Story of Frank Lenz’s Ill-fated Around-the-world Journey and I shall be carrying a more in-depth review of it later.

Lenz started his ill-fated world tour (he was killed, probably by Kurdish brigands, in Turkey) by travelling 5000 miles across America. He cycled east to west, using good turnpike roads in the east but often resorting to following railway lines when dirt and cord roads became impassable. He didn’t use a Harris 20th Century Railroad Attachment, he rode on the ties themselves.

Herlihy takes up the story:

While crossing a railroad budge spanning a steep ravine, an express railtrain suddenly lurched around the bend. Instead of beating a hasty retreat, Lenz suspended himself and his vehicle off one side of the trestle. With one hand he clung to the underside of a tie, and with the other he dangled his bicycle by its front wheel. The train promptly flew by within two feet of his upper hand, while the bridge “trembled and groaned.”

2 thoughts on “Hanging from a railway bridge with one hand, carrying a heavy bicycle in the other”