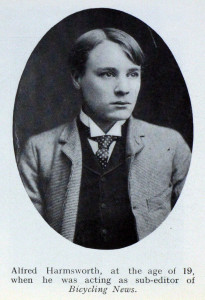 Harmsworth is best known for founding the Daily Mail in 1896 but he got his break in journalism thanks to his love of cycling. Later to become the first great press baron Viscount Northcliffe, the lanky Harmsworth rode a penny-farthing and cut his journalistic teeth by submitting freelance articles for the burgeoning cycle press of the 1880s. He believed the swift, daring bicycle would “revolutionise modern life.” Like other pioneer cyclists, entranced by the capabilities of self-propulsion (human at first, mechanical later), Harmsworth went on to become a highly influential motorist and promoter of early aviation. 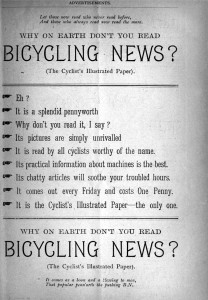 His first cycling articles were published in 1880 in The Cyclist and Wheeling. By the following year, the sixteen year old was also writing squibs for the London-based, publican-owned Bicycling News. In 1882, in an episode a future Daily Mail would have been all over like a rash, Harmsworth made a servant pregnant, forcing him to leave the family home and take lodgings.

His cycling didn’t suffer, nor did his freelance cycle journalism. He wrote more and more pieces for Bicycling News.

When this weekly magazine was bought by the Coventry printers Iliffe & Son, Harmsworth continued to submit freelance pieces, including on the travel potential cycling gave the middle and upper class riders of the day. A typical ride for Harmsworth would be to leave his home in St John’s Wood, London, at midnight and, with a friend, ride to Eastbourne for breakfast. However, on a long distance ride from Bristol he caught pneumonia and, on doctor’s orders was told to leave London and its filthy air. Harmsworth moved to Coventry in 1885 and took a full-time job with Iliffe & Son.

Bicycling News was edited by racing cyclist and author George Lacy Hillier, working from London. Iliffe & Son had an office on Fleet Street but the magazine was published and printed in Coventry, home of the British bicycle industry (why did the Midlands once have so many car factories? Because of the bicycle factories that were there before them). Harmsworth’s introduction of the “brief, pithy paragraph” into Bicycling News (“its chatty articles will soothe your troubled hours”) raised sales eightfold in just a few months.

According to the 1930s Bartleet’s Bicycle Book, Harmsworth was the deputy editor of Bicycling News. But in effect, he was the editor of the magazine, with the famous Lacy Hillier providing leaders and racing reports but not having day to day editorial control.

H. W. Bartleet describes a spat between Hillier and Harmsworth:

“[In 1888] the first laudatory description of the pneumatic tyres appeared, written by A.J. Wilson, and sent direct to Coventry; Harmsworth published it, greatly to the annoyance of Hillier who was not favourably disposed towards the pneumatic.”

Bartleet, not always the most accurate of sources, must have been slightly confused here because Dunlop’s pneumatics didn’t become known until 1889, by which time Harmsworth was no longer in the business of writing about bicycles. Hillier definitely didn’t like the look of John Boyd Dunlop’s innovation (other journalists were also sniffy, The Cyclist of 1889 said “the tyre should last at least a season”) but Hillier’s battle was also with the du Cros family of Ireland, a family of successful racing cyclists who marketed Dunlop tyres and popularised pneumatic tyres, making themselves fortunes in the process. Sir Arthur de Cros, son of the founder, William Harvey du Cros, said Hillier stopped him from racing his “sausage tyre” Safety bicycle at a race meeting at the Oval on 14th September 1889. A.J. ‘Faed’ Wilson was also one of the officials at this race, but saw the potential of the new technology and joined the fledgling company. Wilson had founded the Road Records Association in 1888. He also founded the Cycle and Motor Trades Benevolent Fund in 1905; this charity is now known as Ben, “the automotive industry charity.” 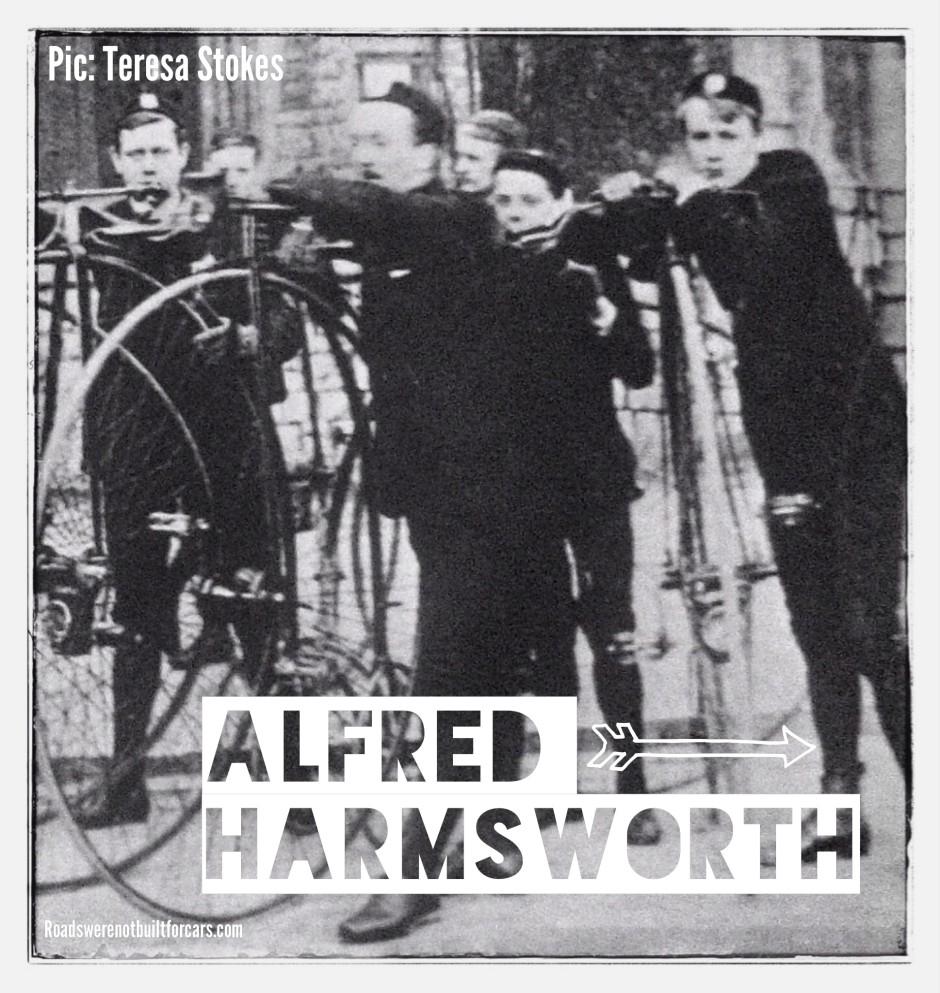 Harmsworth was based in Coventry, editing Bicycling News until 1888. Iliffe Senior offered Harmsworth a partnership in the business – Iliffe praised Harmsworth for his “self-reliance, ambition and abounding energy” – but the young blade wanted to set up for himself. With £1000 he’d saved from his time as a cycling journalist he, and his brother Harold (the later Lord Rothermere; the Rothermere family still owns the Daily Mail) embarked on a publishing career that would see them create the Daily Mail and the Daily Mirror as well as buy The Times.

Harmsworth’s first venture into publishing on his own account was with a Titbits-rival called Answers to Correspondents On Every Subject Under the Sun, printed, at first, by Iliffe & Son. (Bicycling News had had an ‘Answers to correspondents’ column). Early issues of Answers had articles on ‘What the Queen Eats’, ‘How Madmen Write’ and ‘Why Jews Don’t Ride Bicycles’. Within four years Answers was selling over a million copies a week

In the mid-1890s, Harmsworth returned to his roots and published The Rambler, a weekly magazine about the then boom activity of cycling.

The Harmsworth brothers created the Daily Mail in 1896 and the Daily Mirror in 1903. The Mirror was originally a women’s newspaper and was launched with an offer of free gilt and enamel hand mirrors for all readers (it bombed, and had to be resurrected as picture-led daily).

In 1904, Harmsworth became the youngest ever peer of the realm, taking the name Lord Northcliffe. In 1908, Lord Northcliffe acquired The Times of London. Quite some an achievement for a former bicycle journalist.

Pic above is adapted from a Harmsworth family photograph supplied by Teresa Stokes. Alfred Harmsworth is her great great uncle (twice over).