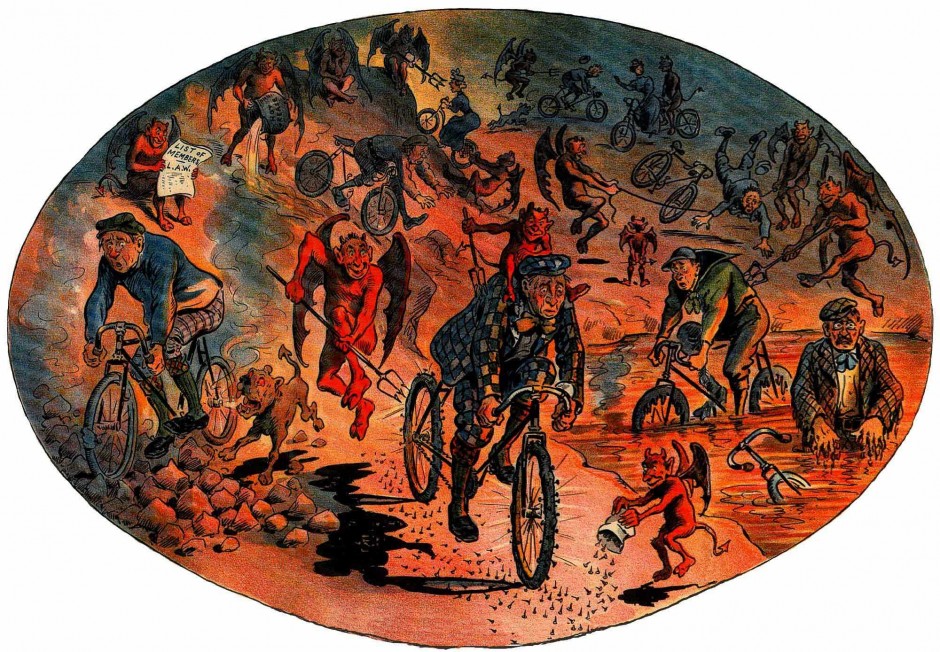 So popular was cycling in the 1890s that American church leaders feared that congregations would be dangerously depleted by those who preferred to ride rather than attend church. An 1890s clergyman in New Haven, who probably didn’t know that the first ever bicycle in America was ridden in his town, way back in the 1860s, conjured up a terrifying picture of Sunday bicyclists riding “down a glittering hill to a place where there is no mud on the streets because of its high temperature.”

This allusion to a hellish future for those who rode bicycles was also carried in the satirical magazine Puck, which in its July 21st issue in 1897, showed devils leading cyclists astray, luring them into molten pits that melted their flesh. One devil, helpfully, has a list of members of the League of American Wheelmen. [Click on the pic above for a better look at this Puck image. Source: Library of Congress].

A year before, in the Minneapolis Tribune, a Baltimore preacher had warned that “bladder-wheeled bicycles are diabolical devices of the demon of darkness…full of guile and deceit.”

In Detroit, a preacher deployed Shakespeare in his tirade against the bicycle, citing from Hamlet:

“Out, out, thou strumpet Fortune!
Break all the spokes and fellies from her wheel,
And bowl the round nave down the hill of heaven
As low as to the fiends!” 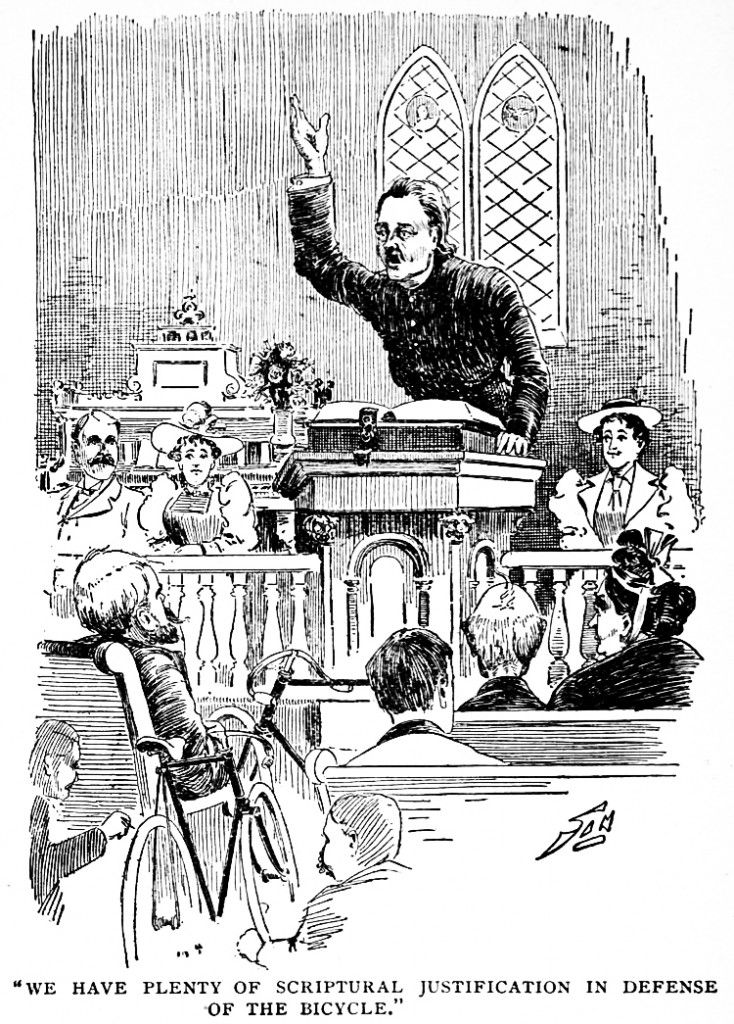 But in the 1895 comic novel Betsey Jane On Wheels: A Tale of the Bicycle Craze, author Hubert E. Brown portrays his rural preacher as a convert to cycling and, in a very long cycling-centred sermon, Elder Roper uses passages from the Bible to justify why his flock could now ride their bicycles to church.

“We have plenty of scriptural justification in defense of the bicycle,” said the preacher, quoting from the first chapter of Ezekiel, 15th to the 21st verses:

Elder Roper concluded, rather hopefully: “From the reading of the Scriptures, we cannot doubt but that the wheels referred to were bicycles.”

On safer theological ground, he added:

“A good cyclist can travel much farther and more rapidly than the best of horses; the wheel is never tired, never eats, drinks or sleeps; will not run away, and does not kick or bite, and is within the reach of all people in moderate circumstances. Through the medium of the wheel, many people secure a proper amount of exercise, and thus become healthy and more energetic thanwhen they ride about in a carriage, or stay at home and do nothing…There is nothing wrong or wicked in rid­ing a cycle to church on Sunday, thus fulfilling one of the commandments of our Savior, giv­ing the horse a little rest and securing much ­needed exercise ourselves.”

A Chicago minister was mentioned in an editorial in the League of American Wheelmen’s Bulletin and Good Roads magazine of March 5th, 1897. He said:

“Behold the bicycle, it toils not, but verily it spins…Dearly beloved, I thank God that I have been nurtured in the warmth of a creed broad enough to believe that the road to salvation is wide enough to accommodate those who arrive on bicycles, as well as those who come afoot and on horseback.”

And, a letter by T.G.B. in the same journal from a year earlier, showed that some churches clearly believed if you can’t beat ’em, join ’em:

“While taking an early morning spin recently, on my wheel over the fine roads in my vicinity (Jenkintown, Pa.) I was agreeably surprised at the sight of a small placard in front of a large Presbytarian church, which said: “Wheelmen will find a convenient place for their bicycles in the basement of the church.” Here was an evidence of the fact that the bicycle was certainly regarded with favor by these church people, presuming that the sign also intended to indicate Sunday riders: and it is a most sensible conclusion to arrive at. The bicycle has come to stay. It does not lower man’s moral nature. On the contrary it tends to elevate humanity…Let the church of every denomination, therefore, take a business-like view of this matter, and one and all welcome the wheelmen and women and their silent steeds, which has so mysteriously attained great favor.”

Such storage room for bicycles was mentioned by editorial writer Josepth B. Bishop in the New York Evening Post in 1896:

“[Bicycling] is the first force of the kind which has damaged simultaneously the church and the theatre. Both are complaining of its inroads upon their domain and are seeking ways by which to counteract them. The churches suffer most severely in the smaller cities and towns and villages. Attendance upon religious service in these places has been helped by the fact that there was little else to do on Sunday, and also by the fact that the church was really the social centre of the community. Now comes the bicycle with a proposal for a social ride into the country on Sunday, for a day spent in the open air, in rolling swiftly over smooth roadways, or through shady lanes, and past green and flowering meadows. It is not in human nature, and especially in young human nature, to resist a call like this. The departure once made is usually for all time. The churches are fast losing their young people, and efforts to call them back by appeals to their sense of Christian duty, and by offering them storage room for their bicycles in the basement in case they will ride upon them to the House of God rather than into open communion with nature, are likely to prove unavailing.”

A Chicago preacher described cycling as natural and confidence-boosting:

“How tranquil and happy! How self-poised and self-reliant, how harmonious with nature and art, the cyclist seems as he passes along the highway, street and boulevard, like a bird on the wings of the wind.”

Robert Smith in his 1972 work A Social History of the Bicycle reported that Reverend John Scudder told an 1895 New Jersey congregation of two hundred attentive wheelmen that the bicycle was the advance agent of heaven, since “it enables us to fly in this life before we get the traditional angelic wings.” 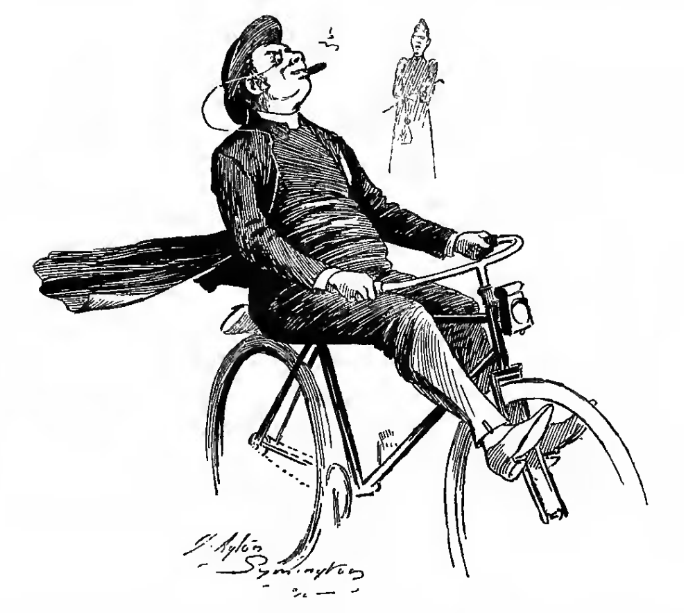 In England, the church looked upon cycling with a far more liberal eye. In ‘Wheels of Chance’, the 1895 cycling novel by H. G. Wells, the hero – the aspiring Hoopdriver – meets a cycling clergyman in a cafe. The clergyman “had faded brown shoes on his feet, his trouser legs were grey with dust,” and told Hoopdriver that cycling led to a “motion through the air” that was “indisputably of a very exhilarating description,” adding that “we are all cyclists nowadays.”

3 thoughts on “Ride your bicycle on a Sunday? Go to Hell!”