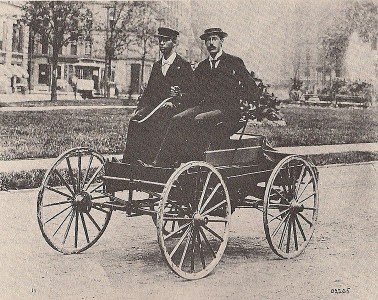 At just after 11pm on March 6th 1896 the first motorcar on the streets of Detroit was piloted to a stop on Woodward Avenue. This car was driven by its builder, 28-year old mechanical engineer Charles Brady King. King’s horseless carriage had been followed by a tall, slim man on a three-year old bicycle. This bicycle was the slim man’s pride and joy, an individual means of transportation affordable by almost all. The slim man was Henry Ford. Three months after riding behind King, Ford knocked out the wall of his home workshop at 58 Bagley Avenue in downtown Detroit and went for a drive in his first automobile. This was the Quadricycle, featuring a great many bicycle parts, including steel spoked wheels and pneumatic tyres.

Ford sold this car to his friend Charles G. Annesley for $200. Annesley, like Ford, was a cyclist. Annesley was nephew of one of the wealthiest men in Detroit and was friends with Barton L Peck. Peck, son of a wealthy industrialist, was another of Detroit’s wheelmen. Before it was a Motortown, Detroit was a Bicycletown. 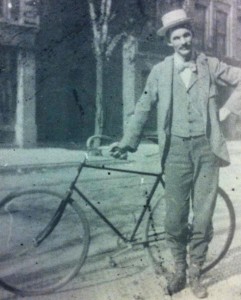 Annesley and Peck were moneyed and educated. Ford was neither but the three had a joint interest: their bicycles. Annesley and Peck could afford the latest models; in 1896, Ford was still riding on the bicycle he had bought in February 1893.

Ford rode to work at one of Detroit’s Edison electric plants on his bicycle. William Simonds’ 1946 biography of Ford said “As became an engineer making a good salary, Mr. Ford wore a handsome moustache, and could be seen frequently on his bicycle pedalling on some errand.”

Simonds also recounts how, as a practical joke, Ford ‘stole’ a Rambler bicycle a co-worker had on a test-ride: “Mr. Ford was seen rounding the corner of State Street. He laughed so hard he fell off the bicycle…”

Ford also cycled to work when he was developing the Model T. He may be known as the kick-starter of the US automobile industry but he was careful with his money and knew that his trusty bicycle could get through Detroit quicker than the town’s streetcar trams.

The rest of Henry Ford’s story is well known. (Maybe apart from the fact, he remained a cyclist. Time magazine, in August 1940, reported that, on his birthday, the 77 year old automotive billionaire “took a ride for photographers on the light (12 Ib.) English bicycle on which he likes to take a three-mile spin every evening after supper).

Ford’s cycling friends, Annesley and Peck, largely faded from history. Annesley’s main claim to fame is for a letter he wrote in 1901, disparaging the prospects of his old friend.

While working for the Buffalo Gasolene Motor Company, of Buffalo, New York – a manufacturer of boat engines – he answered a job application letter from another friend, Walter Marr (later to be chief engineer at Buick).

Annesley wrote: “What is poor old Ford doing? I feel so very sorry for him. He is a good man and perfectly capable;, and yet cannot get out of the hole just because he won’t leave Detroit.” 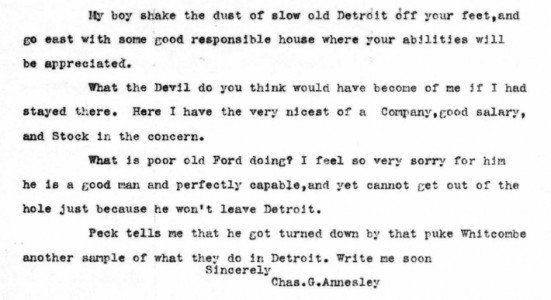 NB
Just because Henry Ford rode a bike, that doesn’t make him an angel. In fact, Ford was an anti-Semite and, at one time, made sympathetic overtures to Adolf Hitler. And, guess what, Adolf Hitler was a cyclist, too. In the First World War he was a bicycle messenger, as shown by his military records. This document says he was a “radfahrer”, a cyclist, not a motorcyclist, that would have been written “Kradfahrer” in military jargon. Hitler’s time as an Austrian fixie hipster didn’t leave a good impression: when in power Hitler’s Nazi party enacted a number of anti-cycling laws, aiming to get cyclists off roads, leaving more space for the “peoples’ cars”