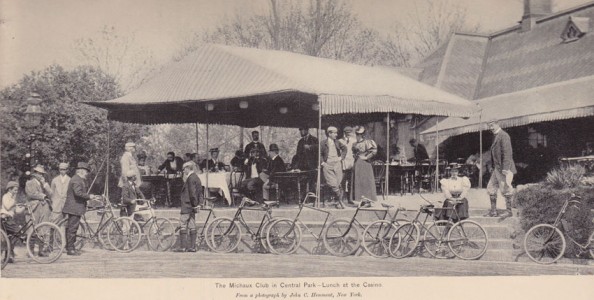 The Sprockettes mini-bike women’s group of Portland, Oregon, fuses cycling and street dance and has been entertaining the eclectic Portland bicycle scene since 2004. The San Francisco Bicycle Ballet is older, first performing in 1996.

Rewind one hundred years and dancing on bicycles was performed by members of the Michaux Club of New York, named after the French bicycle innovator of the 1860s. This club was ultra-swanky. In the mid-1890s, cycling was fashionable and chic. Bicycle riders were an ‘in’ group (one of the reasons New York built the world’s first bike path). Some of New York’s “best people”, as Mumsey Magazine put it, were seen awheel. Rich socialites, such as the Rockefeller’s and the Roosevelt’s, were members of the Michaux Club.

“To no metropolitan club is admission more eagerly sought. Its membership, limited to two hundred and fifty, has long been full, and there is already a lengthy waiting list. Entrance to its exclusive circle may be regarded as a social cachet of the most authoritative sort…The headquarters of the Michaux are at an uptown cycling academy, where it has elaborately appointed rooms…The Central Park Casino and the Claremont do not see a more goodly array of fair women and gallant men, year in and year out, than on the occasions of the Michaux [Spring] meet.”
Munsey Magazine, May 1896

Munsey’s Magazine – the Hello of its day – described the Michaux dances thus:

The club’s musical rides are distinctive features of its indoor life, and the intricate figures performed by the cyclists, as they follow their leader around the spacious hall, to the music of the band, make one of the prettiest sights in all Gotham. The crowning achievement of the Michaux on wheels, however, is the Virginia reel. This time honored dance has been successfully accomplished on horseback…but the bicycle [is] fast relegating the equine race to the museum and the historian, and it remained for the Michaux Club to originate the dance on wheels.

The more accomplished of the cyclists who take part in the reel are so skilful that they never dismount during the dance…[The] picturesque surroundings, and the graceful riders whirling swiftly through the figures…presents a scene not readily equaled in its unique charm.

Across the Atlantic, cycling in Britain was also a high society pursuit. However, by the time the BFI film below was shot, in 1899, cycling’s cachet was waning fast. Nevertheless ‘Ladies on Bicycles’ shows that synchronised cycling was still popular with women of substance.

“The precision of the women skilfully negotiating their way around a line of bollards is quite remarkable,” says the British Film Institute on the YouTube link before adding, snarkily, “though it’s hard not to watch without willing one of them to catch her long white skirt in the bicycle chain.” 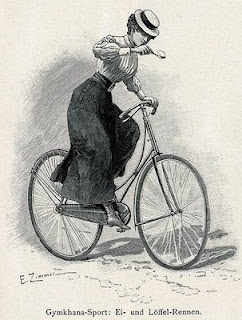 At the Glasgow Exhibition of 1901 synchronised cycling was being described as a two-wheel gymkhana. For sixpence, spectators could watch a performance in the Sports Ground by the Glasgow Ladies Cycling Club.

Rather wonderfully, this performance is to be re-enacted on the weekend of 7-8th April:

This family-friendly event is a re-imagining of the Cycling Gymkhana held as part of the Great Exhibition of 1901. Chiefly designed as an entertainment, the Gymkhana features a parade of historical lady cyclists, a musical drill of synchronized cycling, and several strange races. Bring along your own decorated bike for a chance to win the prize of the Best-Dressed Wheel.

The Cycling Gymkhana is one of three performances being staged by Eilidh MacAskill and Robert Walton of theatre group Fish & Game. These performances will “celebrate the bicycle as a mechanical agent of change and a symbol of universal freedom.”

‘Roads Were Not Built For Cars’ will contain lots of detail on the history of roads, and bicycles, but, to be frank, not a great deal on dancing. The book will be distributed as a free e-book in April. Or May. It’s going to be a big ‘un, and is taking a wee while longer to complete than I thought.