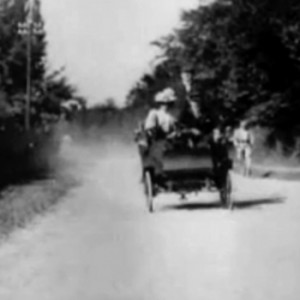 The slow spread of motorcars after the 1896 London to Brighton Emanicipation Run (an event organised by a bicycle builder) wasn’t universally welcomed. Automobilists were “motor fiends”, opined the satirical magazine Punch in 1907, and the motorcar was “an ingenious device for public slaughter”.

The official speed limit for cars was set at 12mph in 1896 but cars were capable of attaining speeds in excess of 50mph by 1905, and many countryfolk lost their lives when crossing roads that had hitherto been all but empty.

In The Motoring Annual and Motorist’s Year Book of 1904, one driver expressed disdain for living things that happened to be in his way:

“One evening when he was running at perhaps a little faster than the legal limit, a dog ran into the centre of the road just in front of him. His first impulse was to avoid the dog, and in endeavouring to do so his front wheel dropped six to eight inches into the ditch at the side of the road, and he was unable to get it out before the wheel struck the high bank, stopping the car suddenly…Mr. Hall now places more value on his own life than that of a dog, so the dogs must look out for themselves in future.”

People, too, had to scatter, or risk falling beneath the wheels of careening motor vehicles. What was it like to be run over by an early motorcar? Helpfully, cinematic pioneer Cecil M. Hepworth made a short film of what to expect if a pedestrian didn’t quickly jump out of the way of a car, How It Feels to Be Run Over. This film was shot in 1900, probably near the Hepworth studio in Walton on Thames.

The footage features a pony and trap, a bicyclist and a motorcar. The film camera represents the view of a pedestrian, glued to the spot, like a rabbit in headlights. The car, with a driver and two passengers, has no intention of slowing down (not that it’s going incredibly fast, the cyclist isn’t outpaced by it). The woman passenger waves her handkerchief to warn the pedestrian to clear the way, to no avail. The car motors on and, with a foreshortened lens effect, appears to keep driving, as it fills the screen to capacity. No doubt audiences would have been scared witless by this early special effect.

Hepworth then lightens the mood with a caption: “Oh, mother will be pleased.” (‘Mother’ is missing from the YouTube version of the footage). Presumably, this ironic interjection is meant to be from the pedestrian a split second before being flattened.

Hepworth had a thing for cars and injuries. His ‘Exposion of a Motor Car’ is a comedic episode featuring body parts raining down on a passing policeman after a car is obliterated by a roadside bomb. The policeman was played by Hepworth himself.

Hepworth’s short films demonstrate there was a certain ambivalence towards this potentially dangerous new form of transport. Five years later, when there were about 8000 motorists in Britain, Punch was still ambivalent towards motorcars, writing that people had to “scatter” away from cars. However, by the 1920s, ‘Motor Mania’ had seen to it that the Middle Class had become the Motoring Class, and Mr Punch – ie the writers and cartoonists on the magazine – had become “himself an enthusiast of the whirling wheel.”