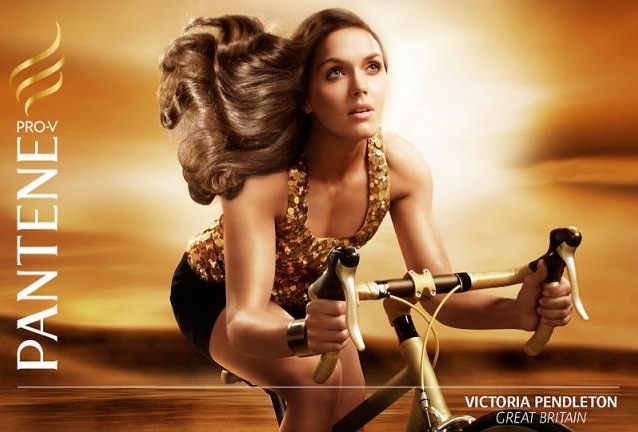 Pantene, the shampoo brand, has started an advertising campaign using the flowing locks of champion cyclist Victoria Pendleton. However, she’s wearing a UCI-compliant sparkly go-faster jersey. Clothes? Who needs clothes? The flowing locks on the nude Cycles Gladiator woman from 1895 (click to biggify) show that the Belle Epoque in France was rather risqué. 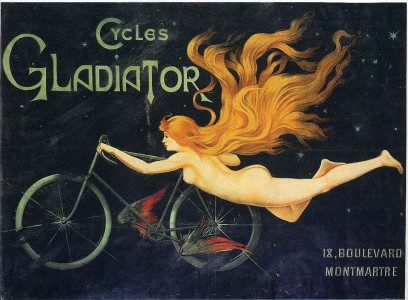 Road.cc has a fine article on the thinking behind the shampoo poster, although the comments section is filling up with (obtuse?) comments over the choice of bike and gears.

The Cycles Gladiator poster was produced by printer G. Massias of Paris. Only four of the originals still exist today.

The French bicycle brand was started in 1891 by Alexandre Darracq (naturally, like other cycle pioneers, he later manufactured automobiles). The company was later bought by fraudster Harry Lawson. I’ve already mentioned his contributions to cycling and to motoring.

He created the famous Emanicipation Run of 1896, the drive from London to Brighton, now reenacted each year as one of the key events in British motoring history. But first he was a bicycle designer and bicycle company owner, the creator of the ‘Safety’ bicycle, the grand-daddy of today’s rear-driven low-mount bicycle with gears. The Rover Safety, designed by John Kemp Starley some six years later, is usually listed as the first modern bicycle – the rider was lower to the ground than on a highwheeler so was safer – but, in fact, he was beaten to it by Lawson. His ‘Bicyclette’ of 1879 was ahead of its time: it was thought undignified, too complex, and although popular for a time in his home town of Brighton, it failed to sell nationally. Undeterred, Lawson carried on designing bicycles through the 1880s. (The name for his bike later became one of the French words for bicycle).

But it’s as a financier – first of bicycle companies, later of motorcar companies – that Lawson was to achieve fame. Or, rather, infamy. His motorcar syndicates and company flotations were often based on fraudulent claims. Despite possessing a brand with perhaps the most iconic poster in cycling, Lawson came a cropper, Cycles Gladiator being one of the casualties. Booo!