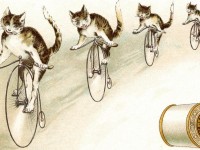 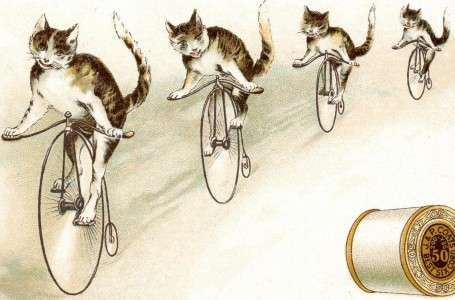 Long before there was icanhazcheezburger, cute boys with cats or cashcats.biz, there was a cat-themed advert for a thread company. J&P Coats Sewing Threads is still in existence.

In the late 1880s the company advertised its threads with the technological marvel of the age: the high wheel bicycle.

These high-status vehicles were all the rage and it was common practice for advertisers to associate non-cycle related products with bicycles. But there’s also another link: James Starley, creator of the first high wheeler, was an inventor of…sewing machines. 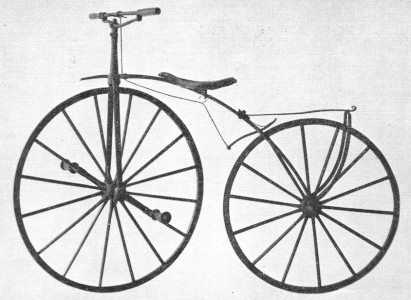 In the 1860s Starley had worked for Newton and Wilson, a sewing machine company in London, but left to create a sewing machine company in Coventry, with an American called SC Salisbury. In 1868, this company – soon to be known as Coventry Machinists – won an order from France to make 500 velocipedes. Starley improved on the design, increasing the size of the rear wheel, and, in 1871, introduced the Ariel, named for the “tricksy spirit” in Shakespeare’s ‘The Tempest’. The Ariel evolved into the high wheeler. This is a statue of James Starley on Greyfriars Green in Coventry. Apt that it’s now sited beside a bike path.

John Kemp Starley, nephew of James Starley, was the creator of the Rover Safety bicycle of 1885. This was the first ‘modern’ bicycle.

Oh, and if you don’t like cats, the Coats Co. had an ad featuring dogs, too. 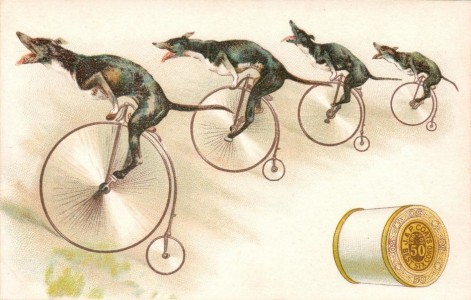