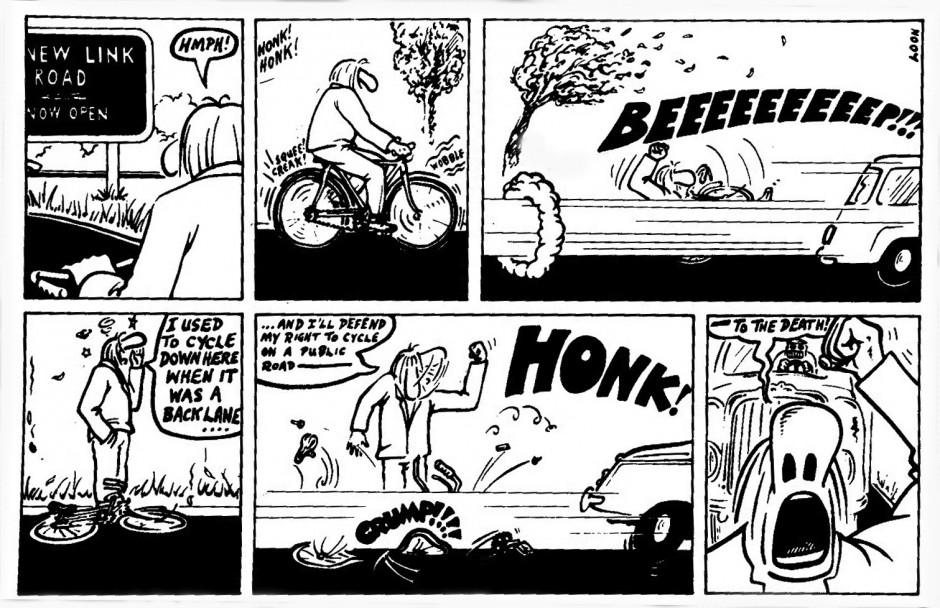 This cartoon by illustrator Borin Van Loon was used as a campaigning image for Friends of the Earth in the early 1980s. Cycling at the time was recovering after a long period in the doldrums. Cycle use in the mid-80s was on the rise but little was being done to accommodate the needs of cyclists. The short-lived ‘touring bike’ revival of the late 1970s was fizzling out; mountain biking had yet to go mainstream, even in the US; and the UK Department of Transport’s policies on cycling were less then accommodating. The road building frenzy of the 1980s was, briefly, good for motorists; and always bad for cyclists.

The Friends of the Earth is no longer as cycle centric as it used to be. In the 1980s it published the Bicycle Bulletin and helped bring cycle campaigners together.

In 1982 the UK Government issued a brief Cycling Policy Statement, which promised official support to create safer conditions for those choosing to cycle. It was soon watered down.

Much campaigning, including from a newly-energised CTC (throwing off its garb as the Cyclists’ Touring Club, getting back to its radical roots – it had successfully lobbied for equal road rights for cyclists at its foundation in 1878) eventually led to the National Cycling Strategy of July 1996. This aimed to “establish a culture favourable to the increased use of bicycles for all age groups; to develop sound policies and good practice; and seek out effective and innovative means of fostering accessibility by bike.”

The central target was to quadruple the number of cycle trips on 1996 figures by 2012.

The National Cycling Strategy was a document, not a strategy. It was never backed with cash. It was later quietly shelved by the Government.

Today, this cartoon will be viewed in differing ways by sometimes conflicting schools of cycle-thought. Those in favour of separation of cyclists from motorised traffic may view the cartoon as a demonstration of why protected bicycle routes are the only sane solution to get more people cycling. Those in favour of protecting the right to the road cyclists have enjoyed since 1878 may be attracted to the sentiments in the penultimate panel, but will wince at the ‘CRUMP!!!!’ and despair at the shocking final panel.

In the UK, cycle path creation has always been half-hearted. There were a few stretches of separated paths build next to arterial roads in the 1930s but they were never part of a joined-up network. Priority at junctions was always given to motor vehicles. The CTC was hostile to such paths because of their poor design. The first UK cycle path was opened in 1935 by minister for transport Leslie Hore-Belisha: it was two and a half miles long. This Pathé film of the ribbon-cutting ceremony shows that, bizarrely, a high wheel bicycle was the first to use the path.

In the CTC Gazette of 1934 this cartoon poked fun at the notion of separated paths for British road users. 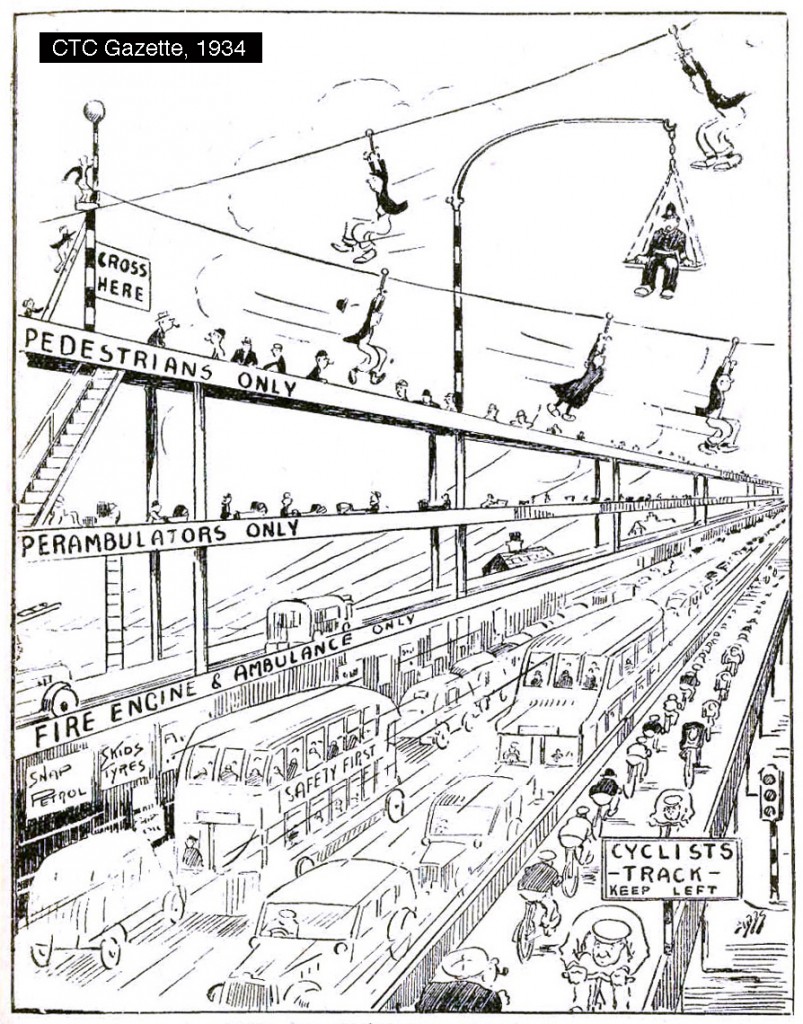