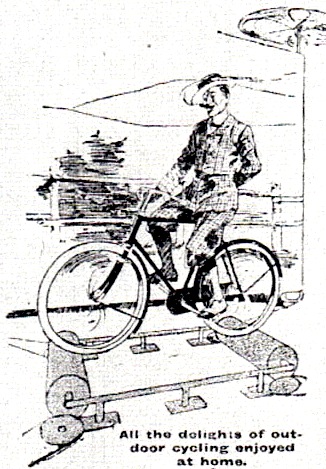 “Our weather is such that for at least one quarter of the year we must cycle at home or not at all,” stated a correspondent to the short-lived The Rambler weekly cycling magazine in 1897.

“Most of us do not cycle,” he continued, “preferring to abandon our wheel rather than attempt to deceive ourselves with an apology for a spin, but just a few cyclists, on the principle, no doubt, that half a loaf is better than no bread, cover a few miles on their home trainers.”

Such trainers were nothing new in 1897. Riders of high-wheelers and tricycles had such devices in the 1880s. But not everybody was enamoured of them.

Writing in the fifth edition of the Badminton Library’s Guide to Cycling, the aristocrat’s guide to the sport and pastime, G. Lacy Hillier, a top racing cyclist of the day, sniffed that:

“It is possible that a rational use of the home trainer might to some extent assist a racing man who could not afford all the time necessary to get into condition; but even this is very doubtful, whilst for average cyclists, during the winter months, there are many exercises which would prove of much greater service physically. A little boxing, dumb-bell exercise, Indian clubs, or simple extension movements, are all calculated to do more practical good than home-trainer work, during the dead season.”

According to Hillier, the indoor cycle trainers then available were “so designed that the rider can fix his machine upon them and pedal away against a graduated resistance; others are simple standards or pillars, carrying a saddle and a flywheel, with cranks and pedals, upon which riders can exercise in the same way.”

“In the winter home-trainer races are promoted by many clubs, the competitors pedalling away at top speed, whilst the excited spectators watch the progress of certain hands round the face of a dial…There are home-trainer champions and home-trainer records…the actual value of the home trainer from a racing point of view is practically nil. None of the men who have shone on these machines have done any real good upon the racing path.”

Indoor roller racing – called Goldsprints to some – became immensely popular in the 1930s and could pack out dance-halls and ballrooms right through until the late 1950s. 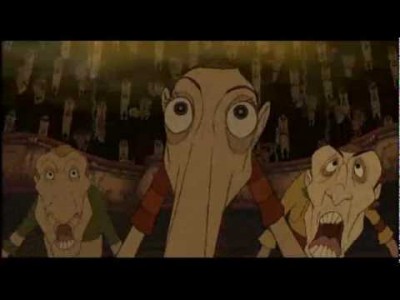 Instead of just watching minute hands go round on a clock as in the 1901 image, below, of ‘Mile a Minute Murphy’, there were also Triplets of Belleville style rigs where cyclists were connected to model bicycles that would race each other, with the models powered by riders on indoor trainers. 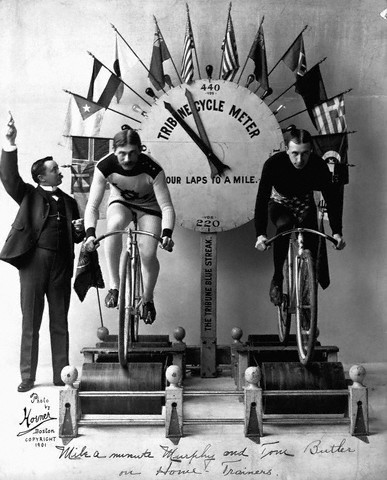 The first such machine was designed by Arthur Lionel Knighten of Oakham, Rutland. He gained a GB patent for his ‘Racing-index for home trainer cycles’ in 1893:

“My invention consists of a model cycle track of about five feet…on which are two or more model cyclists. Underneath the track, preferably inclosed in a box is suitable machinery worked by two or more cyclists on stationary or home trainer cycles, mounted on a platform in front of the track…The idea of the invention is, to form a game or sport by which persons can contest against each other on home trainer cycles; a model on the track representing each contestant and the faster either person pedals his home trainer cycle the faster will the model representing him, travel on the model track.” 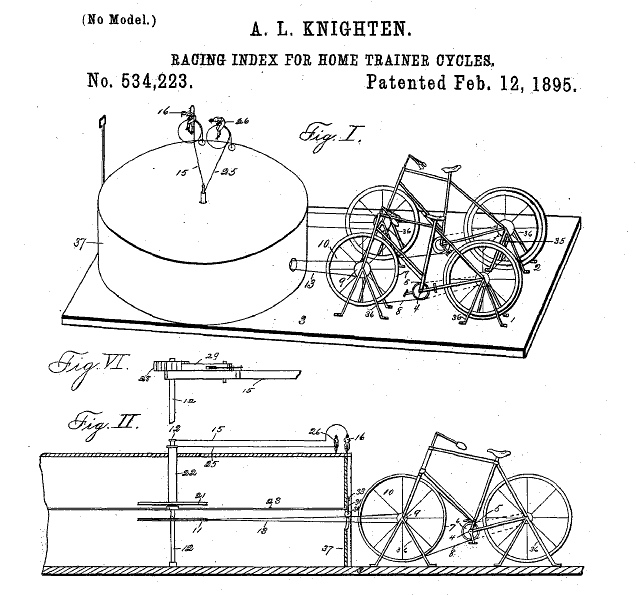 And if you think enlivening boring turbo training by watching a DVD of a road scene is somehow modern, think again. In The Rambler of 1897 there’s a description of an indoor cycle trainer with a painted 3D rolling background, and fans to simulate wind:

“One rider…in an endeavour to impart realism to his indoor journeys, contrived an ingenious affair by which he was able to enjoy in unpropitious weather all the pleasures of a country run…He was a scene painter by profession…he painted on canvas rolls two long country views – fields, villages, towns, etc. These he fixed on rollers, and placed either side of his stationery machine. The working mechanism of these rollers was cleverly connected with the rim of the far wheel of the bicycle by means of thin wire ropes, which ran over rollers worked by the revolution of the wheel, and so the strips of scenery on both sides of him were put into action…As he pedalled away he seemed to be passing the country as the scenes were slipping by on his right and his left…But this was not sufficient; he required the rush of air to heighten the deception. He pressed into service four circular fans…And thus he was able to enjoy a ride, the realism of which left little to be desired.”