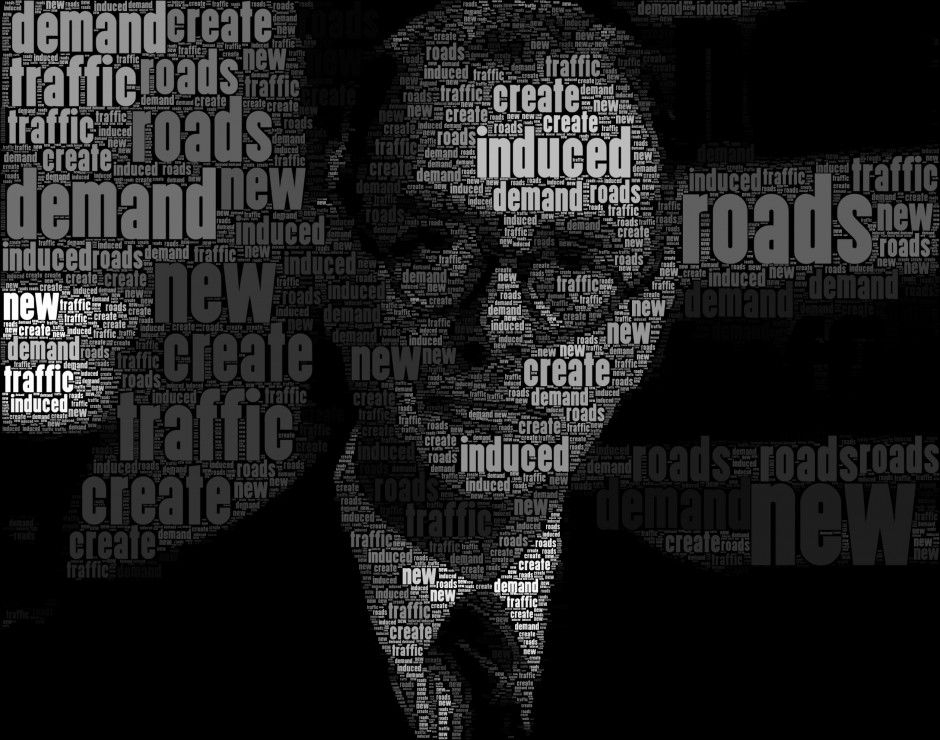 Transport academics tend to credit the discovery of ‘induced demand in transport’ to J.J. Leeming, a British road-traffic engineer and county surveyor, writing in 1969. He observed that the more roads are built, the more traffic there is to fill these roads. The idea was conceived shortly after German mathematician Dietrich Braess released the Braess’s paradox which shows that “selfish” motorists can’t be relied upon to consider the optimal travel times for all rather than just themselves, leading to delays for all. These ideas were further expanded in the Lewis–Mogridge Position of 1990 and the Downs–Thomson paradox of 1992.

The idea that building more roads leads to more congestion was used by anti-roads campaigners from the 1970s on to combat the futility of road building, and it became an orthodox position – briefly – following advice to Government from the Standing Advisory Committee on Trunk Road Assessment study of 1994. Margaret Thatcher’s road building programme – “the biggest since the Romans” – was halted. (Despite “austerity” it’s back again.)

Campaigners have a pithy phrase to describe induced demand:

“Building more roads to prevent congestion is like a fat man loosening his belt to prevent obesity.”*

Neat, but not neat enough to prevent today’s road building programme. New roads are being built and these new roads will quickly fill with traffic, leading to calls for yet more roads to be built. And so it goes on.

But induced demand was known about long before 1969. Writing in 1866, surveyor and engineer William J. Haywood, one of the builders of the Holborn Viaduct, said the new thoroughfare would attract more travellers: the “facility of locomotion stimulates traffic of itself”. His solution? Build more and more roads, of course. This was also the conclusion of Sir Charles Bressey’s Highway Development Survey for London, published in 1937. In his report – penned with the great architect, Sir Edward Lutyens – Bressey wrote:

“As a typical instance may be quoted the new Great West Road which parallels and relieves the old Brentford High Street route. According to the Ministry’s traffic census extracts…the new route as soon as it was opened carried four and a half times more vehicles than the old route was carrying. No diminution, however, occurred in the flow of traffic along the old route and from that day to this the number of vehicles on both routes has steadily increased…These figures serve to exemplify the remarkable manner in which new roads create new traffic.”

In an article about the Bressey Report in the Illustrated London News in 1938, an illustrator imagined what London would look like if Bressey and Lutyens had their way, including this not altogether desirable plan for a car park on Trafalgar Square: 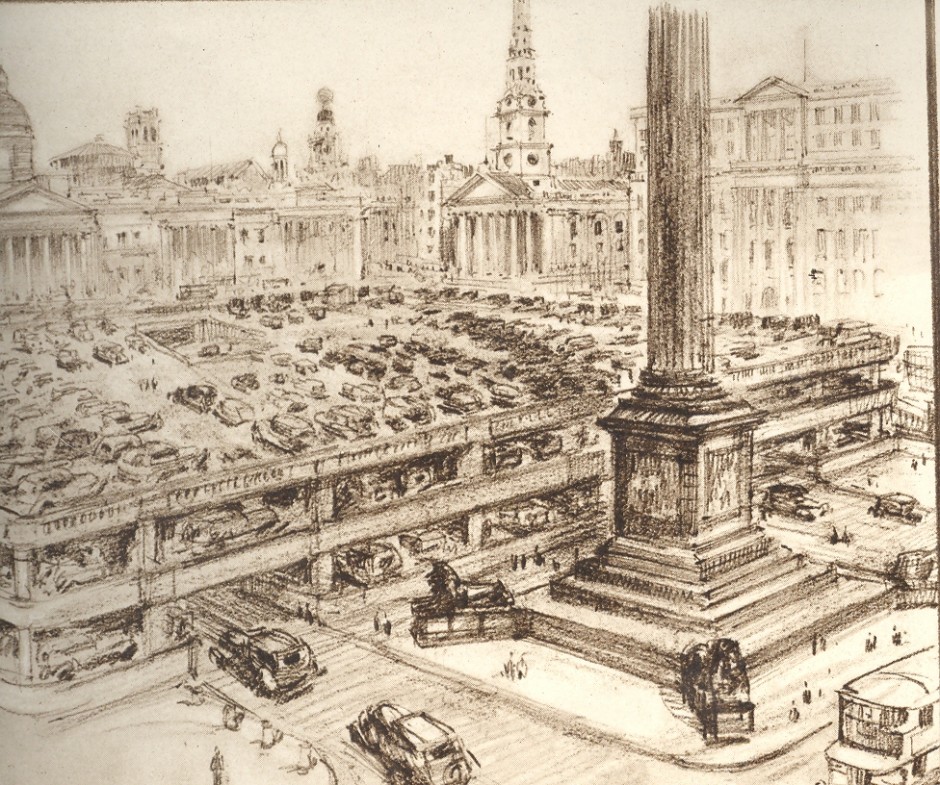 The clipped, patriarchal tones of Bressey’s voice, and his stiff bearing, can be enjoyed in the period film below. It was shot in 1939 for the Post Office, hence the middle portion featuring the GPO’s incredible private underground network in London. Bressey is shown in his office, complaining that Sir Christopher Wren was constrained by the forces of “conservatism” for not being allowed to carry out his plan of giving London a series of wide boulevards following the Great Fire of 1666. 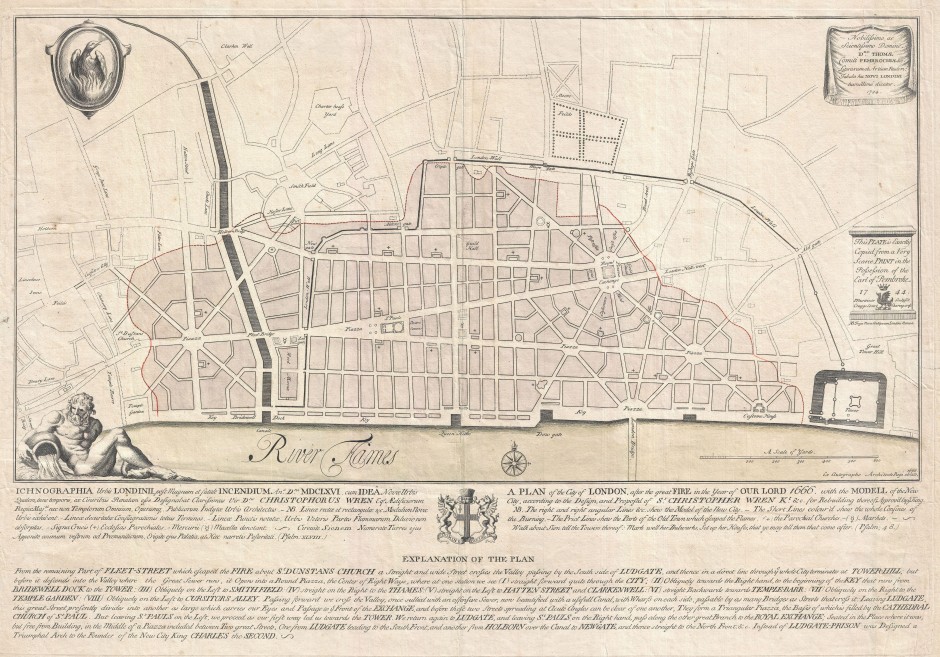 1744 copy of Sir Christopher Wren’s post-1666 map of London. Despite claims from Wren, and his son, the plan was never seriously considered. For a start it was topographically impossible. Click for huge version.

“Its ‘Practicability… without Loss to any Man, or Infringement of any Property, was…demonstrated, and all material Objections fully weigh’d and answered. Yet nothing was effected because of ‘the obstinate Adverseness of a great Part of the Citizens to alter their old Properties, and to recede from building their houses again on their old Ground and Foundations; as also the distrust in many, and Unwillingness to give up their Properties, tho’ for a Time only, in to the Hands of publick Trustees, or Commissioner, til they might be dispens’d to them again, with more Advantage to themselves, than otherwise was possible to be effected…”

In the film, when Bressey complains about London’s “narrow, medieval streets” the camera pans over a succession of very wide London streets, rather negating the voiceover. [The chipper, modern-sounding voiceover is of Herbert Hodge, the London cabbie who helped popularise ‘estuary English’].

INDUCED DEMAND
And here are some more choice quotes from magazines, authors and politicians regarding what they felt were pressing transport matters.

“The majority of the public today relies for transport of every kind mainly on the roads, and everything goes to show that they are doing so to an unprecedented degree… People travel now more than they have ever travelled, and in the future they will travel still more. If they want more roads to travel by, you may be sure that they will get them, for in the last analysis nothing can stop the development of the road.”
R.M.C. Anderson, The Roads of England, 1932

“A motorist is apt to complain of the ‘overcrowded’ condition of the road if he finds he has not continually got a whole mile-long stretch of it to himself, but is one of a widely spaced and rapidly moving queue of half a dozen or so. He will declare there is no pleasure in motoring under such conditions. He will search his map for some alternative route by quiet lanes where he can speed along with the road to himself. And when others find that alternative route and all further alternatives are exhausted, he proceeds to demand a new road system so that his motoring may again become a pleasure.”
Thomas Sharp, Town and Countryside, 1932

“I think in the past we have followed in vain the futile policy of trying to make traffic fit the roads, and we cannot hope to see things better until we make up our minds to fit the roads for the traffic. Increase in road traffic is an enemy which grows more formidable every day. I would suggest that it is dangerous to delay matters further, and I do hope the Minister of Transport will consider acting on the Bressey Report as soon as is reasonably possible.”
Lord Teynam, June 1938

* This phrase is based on a 1955 article by Lewis Mumford. Writing in The New Yorker, the great urban planning specialist suggested that “people … find it hard to believe that the cure for congestion is not more facilities for congestion.”⁠

Most of the fancy cures that the experts have offered for New York’s congestion are based on the innocent notion that the problem can be solved by increasing the capacity of the existing traffic routes, multiplying the number of ways of getting in and out of town, or providing more parking space for cars that should not have been lured into the city in the first place. Like the tailor’s remedy for obesity – letting out the seams of the trousers and loosening the belt – this does nothing to curb the greedy appetite that [has] caused the fat to accumulate …⁠

10 thoughts on ““The remarkable manner in which new roads create new traffic”: a history of induced demand”