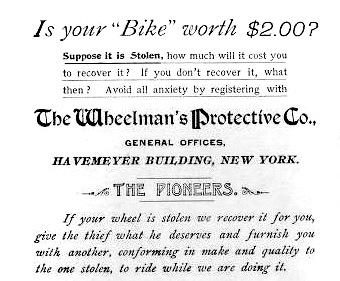 This is an advert for bicycle insurance contained on a cyclists’ map of New York State, from 1895. The “bike” is in inverted commas because bike is the relatively new word for bicycle. Most bicyclists of the day rode “wheels”, hence the League of American Wheelmen. When the advert states “if your wheel is stolen we recover it for you”, the “wheel” means bicycle not, er, a single bicycle wheel.

Another ad from the same time says:

“DON’T SWIPE IT, CHIMMY! IT’S PROTECTED BY THE WHEELMEN’S PROTECTIVE CO., AND YOU’LL GET THREE YEARS!” 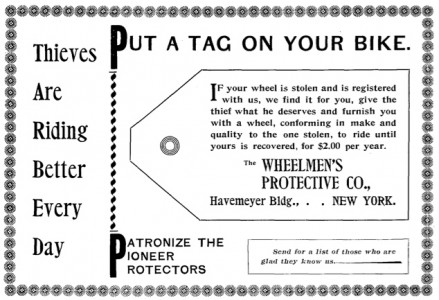 The advert was found on ‘Sectional Road Map of Westchester County, New York and Part of Fairfield County, Conn. Showing the Good Roads.’ (New York: Servoss, 1895). Maps aimed at cyclists – showing good roads – kick-started the ‘road atlas’ business. Most were published by entrepreneurial publishing businesses who could see a lucrative market selling maps to the fancy cyclists of the end of the 19th Century. Some of the maps were published by railroad companies, eager to get cyclists out into the countryside (by train, naturally).

In 1900, the Long Island Railroad Co. produced a tourist map aimed at both cyclists and motorists. Motorists, it was assumed, would have to end up using the railroad because the automobiles of the time were so unreliable. This map has a wonderfully long and fanciful title:

Cyclists’ Paradise and Automobilists’ Arcadia: a Guide for Tourists, with an Accurate Map Showing Roads and Cycle Paths of Long Island, with Runs, Hotels, and Time Tables, Sufficient Data to Enable Anyone to “Lay Out a Trip” Intelligently.

The Wheelman’s Protective Co. of New York was one of many insurance companies which sprouted up to service the bicycle boom of the 1890s. Most – such as the American Wheelmen’s Protective Association of Chicago – went out of business when the boom imploded. 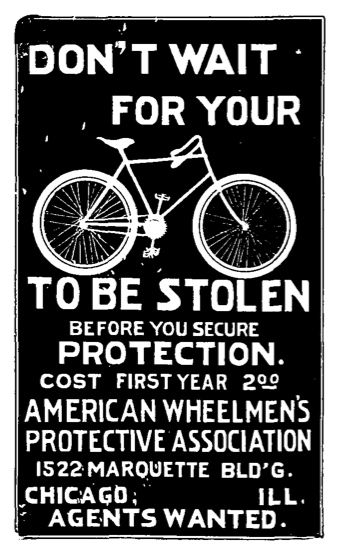