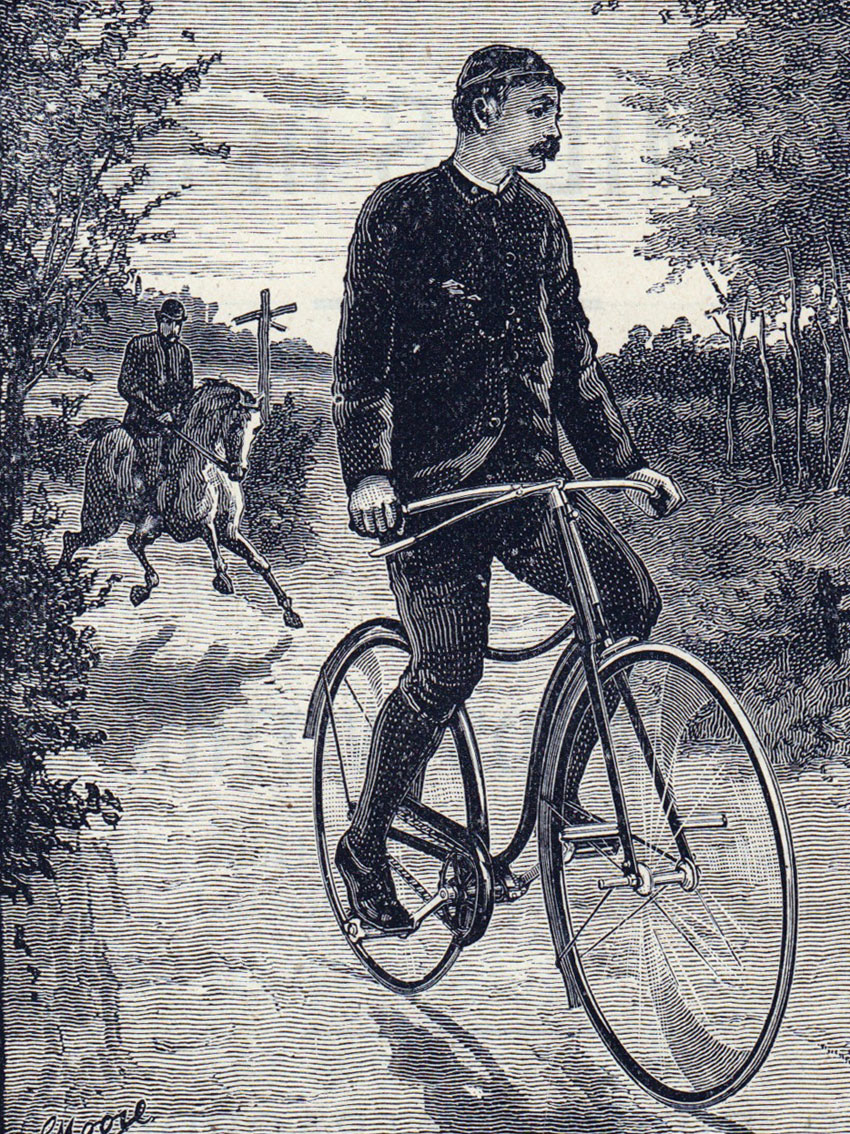 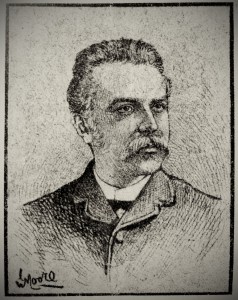 JK Starley is generally considered the creator of the modern bicycle. According to the editor of The Cyclist, a contemporary magazine, Starley’s Rover Safety bicycle “set the fashion to the world,” leading to a global boom in bicycle ownership.

Starley’s Rover bikes were so called because their riders were free to rove. The name for bicycle in Poland is rower, based on the word Rover. 14th December is JK Starley’s birthday and the Bicycle Association led the global celebrations by leaving flowers and a card on Starley’s grave in the London Road cemetery in Coventry. 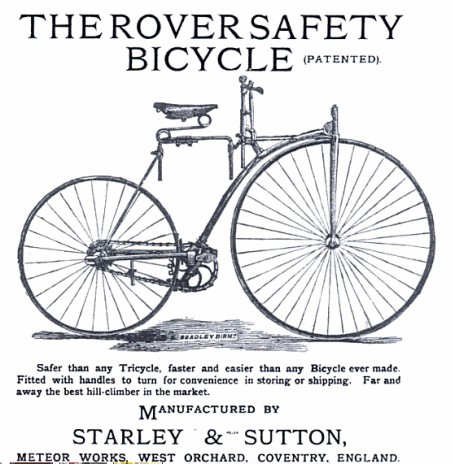 Many manufacturers had attempted to create a Safety bicycle – safe in comparison to riding a high-wheeler, that is. Starley’s first design for a Safety was introduced in 1884, while his company – Starley and Sutton Co. of Meteor Works, Coventry – was still making tricycles. The high wheelers of the day – later called ordinaries to distinguish them from Safeties, and also disparagingly known as Penny Farthings – were not just dangerous, they were suitable mainly for tall, athletic men. Writing in 1921, industrial journalist W. F. Grew said:

“However enthusiastic one may have been about the ordinary – and I was an enthusiastic ride of it once – there is no denying that it was only possible for comparatively young and athletic men, and if it had remained the only bicycle obtainable, the pastime and the utility of cycling would never have reached its present state of popularity.”

Created by Starley and his friend William Sutton, the first Rover Safety was an indirect steering, rear wheel drive, chain driven bicycle, unlike the direct drive high-wheeler. The first Rover Safety – with a 36 inch front wheel and bridle rods not a raked front fork – was far from perfect and Starley, with the help of Sutton, modified the design, creating the second Rover in 1885, a bicycle with nearly equal sized wheels and, critically, direct steer forks. It was introduced at the Stanley Cycle Show, Britain’s main annual bicycle exhibition, held in a marquee on the Thames Embnakment next to Blackfriars Bridge in London between 28th January to 3rd February, 1885. This bicycle has most of the classic hallmarks of a modern machine.

High-wheeler riders looked down on Safeties – literally and figuratively. They called them “dwarf machines”, “beetles” and “crawlers.” However, the 1885 Rover – with solid tyres still – was shown anything but a crawler when a number of them beat the time record in a 100 mile promotional race on the macadamised Great North Road between Norman Cross, near Peterborough, to one mile beyond Twyford, in Berkshire. This race was staged, by Starley and Sutton, on 25th September 1885 and helped convince people that the Safety was here to stay. 14 riders raced that day, all on Rovers, some equipped as roadsters, others as racers (one was only 33lbs, light for the day). The first rider home took just 7 hours 5 minutes.

By 1888, the design-registered Rover has evolved to the extent it is clearly recognisable as a modern machine: it had two equally sized wheels (26inches, the same as a modern mountain bike) and a triangular diamond-shaped frame. When shod with John Boyd Dunlop’s pneumatic tyres – created in 1887, race proven in 1889 and commercially available in 1890 – the Rover Safety proved itself to be the perfect bicycle and, in essence, the main features on Starley’s 1888 machine are still used on the majority of bicycles sold and ridden today. 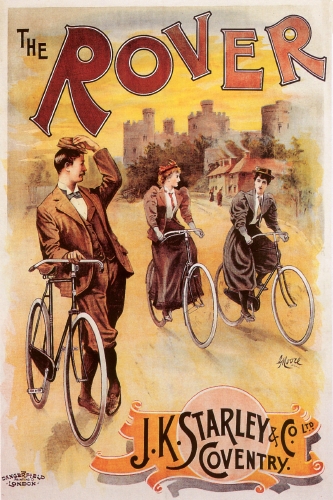 JK Starley did not invent the Safety bicycle, nor did he name the category nor did he come up with the name Rover (that was his employee George Franks, a retired diamond merchant). Serial entrepreneur Harry Lawson (he was later convicted for fraud) created his Bicyclette Safety bicycle in 1879 and this is arguably the world’s first Safety bicycle. It did not have sloping forks, or equal sized wheels, did not sell in great numbers and was a design cul-de-sac. It was J.K. Starley who adapted a number of existing technologies and terms and, over the space of just a few months, led the creation of the bicycle as we know it.

A lecture J.K. Starley gave to the Society of Arts in London in 1898 shows us his thinking, ten years after the Rover Safety had been largely perfected:

“I felt the time had arrived for solving the problem of the cycle […]. I therefore turned my attention solely to the perfection and manufacture of the Rover bicycle.

“The main principles which guided me in making this machine were to place the rider at the proper distance from the ground; to connect the cranks with the driving wheel in such a way that the gearing could be varied as desired; to place the seat in the right position in relation to the pedals, and constructed so that the saddle could be either laterally or vertically adjusted at will; to place the handles in such a position in relation to the seat that the rider could exert the greatest force upon the pedals with the least amount of fatigue; and to make them adjustable also.

“I had been considering what a man pedalling a bicycle could be compared to… it largely resembled walking up a ladder, but …whereas the pedals went down in the former; the man went up in the latter. I therefore had to determine where the handles should be placed to enable him to bring the whole of his weight on to the pedals…. It was … the handle-bar which compelled me to adopt the present form of machine, as I could not get it sufficiently forward by the other type. It will be seen by the position of the handle-bar on the Ordinary [high-wheeler] bicycle, that it was utterly useless and imperfect for this purpose.

“…my aim was not only to make a safety bicycle, but to produce a machine which should be the true Evolution of the Cycle, and the fact that so little change has been made in the essential positions, which were established by me in 1885, prove that I was not wrong in the cardinal points to be embodied to this end.”

The Rover Cycle Company started manufacturing Rover cars in 1904, three years after J. K. Starley’s death. Rover was later managed by J. K. Starley Jnr., who kept up a connection with the bicycle trade via membership of the Pickwick Bicycle Club. His sobriquet was Justice Starleigh.

19 thoughts on “John Kemp Starley, creator of the bicycle that “set the fashion to the world””