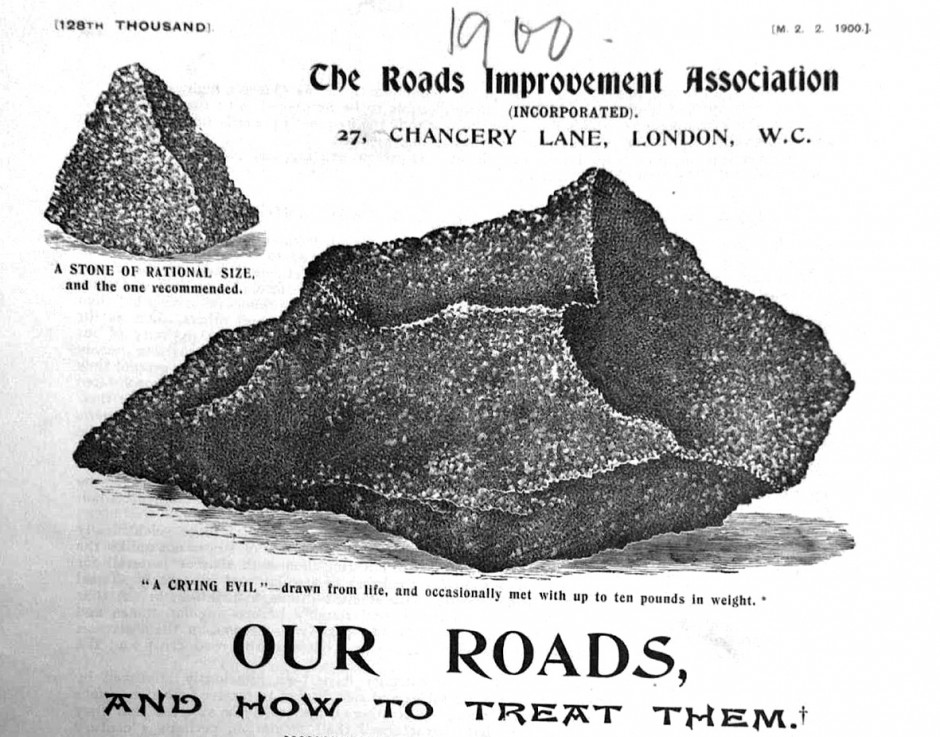 Victorian touring cyclists from Britain often complained about the rough granite setts used in Belgium, setts now famous as the pavé to be found on about 50kms of today’s Paris-Roubaix road race. 19th Century cyclists preferred macadam surfaces (small stones bound with dust) or, for speed, wooden planking, which was found in the posher urban areas. The picture above comes from a pamphlet issued in 1900 by the Roads Improvement Association and showed the proper dimension of stone to be used in macadam roads, and decries the large, sharp stones sometimes found embedded in the macadam.

The Roads Improvement Association had been created in 1885 by the Cyclists’ Touring Club and the forerunner to British Cycling. By 1900 it had been joined by motoring interests (the cycling organisations would be later pushed out of the way) and the pamphlet, which was aimed at influencing county surveyors, remarked that granite setts, now a very expensive road treatment and used to demarcate low-speed or historic zones, was at the time one of the cheapest and least desirable ways of surfacing roads.

It was also bumpy, as can be seen from the TV pictures from Paris-Roubaix. Cyclists then and now have never been fond of granite setts (pavé isn’t made of cobblestones; cobblestones are river-rounded stones unsuitable for any traffic whatsoever).

“It is to be regretted that granite setts compare so favourably with other materials in the matter of cost of maintenance – in other respects they have little to recommend them, and all that can be said in justification of their use is that they are a necessary evil…the initial saving is far more apparent than real, seeing that the life of carriages and all light vehicles is materially shortened where such a bone-shaking and destructive pavement is employed.”