My book is a niche one but hopefully it will appeal to cyclists and motorists who like their history. Oh, and those interested in how we got our silkily surfaced roads, too. I’m happy to bore anybody silly with the basic concept of the book – that cyclists were the first to push for Good Roads and were also the pioneers of motoring – and this morning I tried to convert a couple of Mormons.

To be fair, they started talking to me first. In fact, Elder John flagged me down while I was riding my bike (it was a cargo-bike, I wasn’t going terribly fast). I wasn’t sure why he wanted me to stop, but we got chatting anyway. Turns out he’s from Utah (not all Mormons are), as was his fellow missionary. I know Utah – I go there every year for PressCamp. We talked about mountain biking in Utah, and even though he’s from Ogden, Utah, Elder John didn’t know that this is the home of a number of high-end bike companies. Enve, Volagi Cycles and a distribution centre for Surly/Salsa-owner QBP are all in Ogden. The town is aerospace-centric and where there are composites engineers there will be high-end bike companies.

We also talked about skiing and school baseball, and how these two fine upstanding young men, in their smart suits, were learning Mandarin in order to talk to (i.e., convert) Chinese people.

When we got on to the tricky subject of the Mormon view of God – their specialist subject, you’d think – they suddenly realised they were short on time. The fact I told them I wasn’t religious but had a degree in comparative religion may have hastened their departure.

I’m sure it was my encyclopaedic knowledge about world religions that scared them off rather than my roads history lesson. They said they were interested in what I had to tell them about the Mormonism-and-roads sections of my book, but they probably weren’t.

I won’t reveal all here but it’s not just the well-known info about 19th century Mormon leader Brigham Young wanting the streets of Salt Lake City to be built wide enough so that a wagon team could turn round without “resorting to profanity.” I’ve dug up info that not even Mormon scholars seem to be aware of, connecting the Latter Day Saint Movement’s City of Zion street plan of 1833 to a 17th century English mathematician and a venerable English sport.

A couple of years back, on a road-bike climb to Deer Valley in Utah, I found a Mormon badge, and I’ve kept it in my wallet every since. It said “Missionary in training.” After today’s eyes-glazing-over conversation I’ve elevated myself to the position of Elder in my own church. 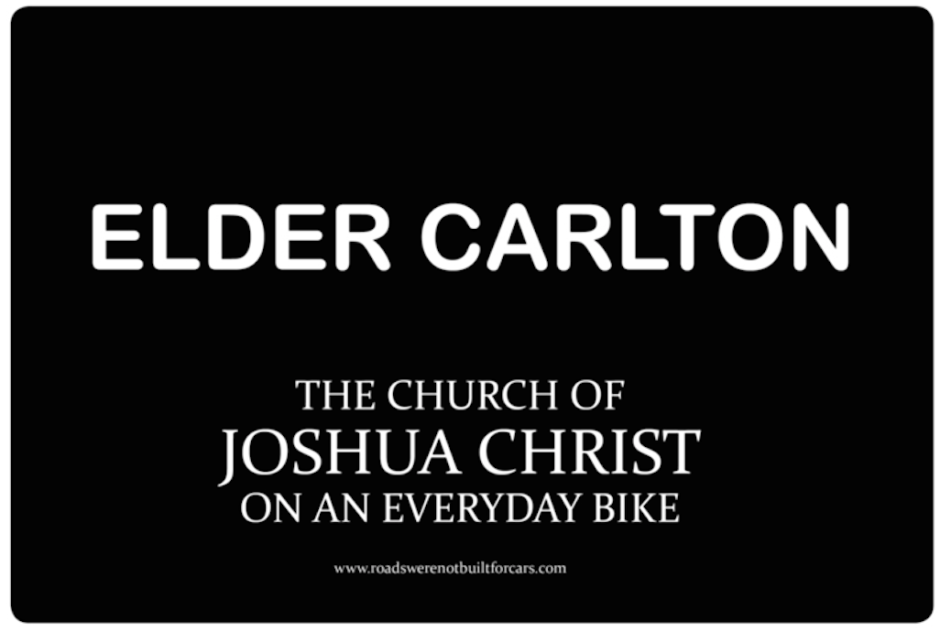