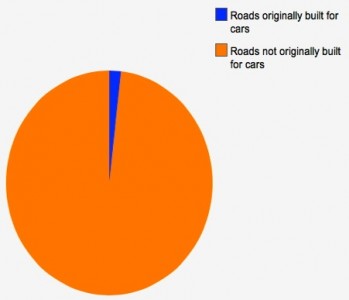 Viewed from a windscreen, roads look as though they were built for cars and trucks. Britain’s motorways and the elevated arterial road systems of the 1960s and 1970s seem to bear this out but such car-centric highways are the exception not the norm, and there aren’t that many miles of them. Most roads may have been adapted for motor vehicles but very few were actually conceived, designed and built for such specialist use. The overwhelming majority of roads in the UK are general purpose roads; roads for everybody, not just cars. For every one mile of motorway, there are 95 miles of roads conceived originally for non-motorised traffic.

According to the Department for Transport’s Road length in Great Britain: 2011 there are 245,000 miles of roads on this small island of ours. As a percentage how many miles of roads are motorways? It’s just 1 percent. A whopping 87 percent of the roads of Great Britain are minor roads.

12 percent are classed as A roads but only a fraction of these were actually built from scratch with cars in mind.

3 thoughts on “How many miles of UK roads were built for cars?”