This famous phrase is (probably) based on a 1955 article by the great urban planning specialist Lewis Mumford. I’m ending chapter sixteen of my book with parts of the quote but won’t be including it all so here are chunks from three of the four pieces Mumford wrote for the New Yorker in Spring of that year. 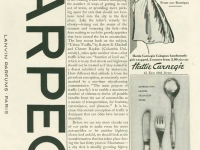 The fact is that motor transportation is the sacred cow of the American religion of technology, and in the service of this curious religion no sacrifice in daily living, no extravagance of public expenditure, appears too great…

Most of the fancy cures that the experts have offered for New York’s congestion are based on the innocent notion that the problem can be solved by increasing the capacity of the existing traffic routes, multiplying the number of ways of getting in and out of town, or providing more parking space for cars that should not have been lured into the city in the first place. Like the tailor’s remedy for obesity – letting out the seams of the trousers and loosening the belt – this does nothing to curb the greedy appetites that have caused the fat to accumulate. The best recent book on the subject, “Urban Traffic,” by Robert B. Mitchell and Chester Rapkin … takes quite another view —that traffic is but one “function of land use,” which is to say that streets and highways should not be treated as if they existed in a desert inhabited only by motorcars. How different that attitude is from the prevalent conception, as succinctly summarized by a one-time city-planning commissioner: “The main purpose of traffic (surely) is to enable a maximum number of citizens to derive all possible benefits from the use of automobiles as a means of transportation, for business, convenience, and pleasure.” It is because this second conception of traffic is dominant that our cities have become a shambles.

A large part of the present difficulty … is caused by the over employment of one method of transportation, the private motorcar – a method that happens to be, on the basic of the number of people it transport, by far the most wasteful of urban space. Because we have apparently decided that the private motorcar has a sacred right to go anywhere, halt anywhere, and remain anywhere as long as its owner chooses, we have neglected other means of transportation …

I have suggested earlier the possibility that private vehicles may eventually be excluded from whole urban areas. Do not fancy that this is a mere whimsey …

Even those who think of only feathering their own nest are actually soiling it so badly that it will soon be uninhabitable.