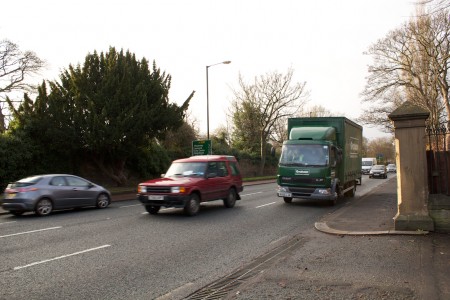 Viewed from a windscreen, roads look as though they were built for cars and trucks. Britain’s motorways and the elevated arterial road systems of the 1960s and 1970s seem to bear this out but such car-centric highways are the exception not the norm. For every one mile of motorway, there are 95 miles of roads conceived originally for non-motorised traffic.

Many of today’s ‘main roads’ may be blacktopped, plastered with white thermoplastic road markings and zoned with barriers but such accoutrements are largely cosmetic. When TV and movies want to portray a period scene, production crews hide road signs and spread dirt over the blacktop. Most period dramas tend to show 18th and 19th Century roads as twisty and narrow but the main ones were far, far wider than most people imagine. Stretches of the Great North Road were once much wider than even the widest parts of the current M1 motorway.

And, in my hometown of Newcastle, there’s a road not far from where I’m writing that is an excellent example of a straight four-lane road, usually choked with fast, motorised traffic that most motorists probably assume was straightened and widened for their convenience. In fact, Jesmond Road – shown above – has been as wide as it is since 1835. It was built as the New Turnpike Road by the Corporation of Newcastle upon Tyne, a wider, straighter route from the centre of town to the then agricultural parish of Jesmond.

The current road is bounded on two sides by old cemeteries. Despite aborted plans to dig up graves in 1971 to make way for a motorway, the walls of the two cemeteries have not shifted.

The oldest cemetery – originally called Newcastle upon Tyne General Cemetery and laid out by architect John Dobson – was opened in 1836. The road was built by Dobson in 1835, a wide processional avenue for his cemetery. Here’s the wide and straight ‘New Turnpike Road’ from Oliver’s 1844 map of Newcastle: Jesmond Road was made wide for all users, and was made wide at least sixty years before the introduction of the ‘Red Flag Act’ in 1896 after which motorcars rapidly encroached on – and soon dominated – Britain’s ancient road network. 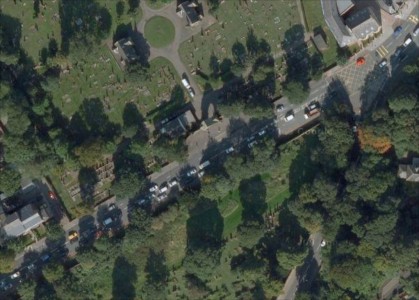 Motorists may assume Jesmond Road, and the thousands of wide roads like it all over Britain, are for them and them alone, but they are wrong.

The public highway is a shared resource; we must all operate give and take. This was made clear in the case of Harper v GM Haden & Sons Ltd of 1933. The judge said:

No member of the public has an exclusive right to use the highway. He has merely a right to use it subject to the reasonable use of others…The law…recognises that there are…competing public interests. The law relating to the user of highways is in truth the law of give and take. Those who use them must in doing so have reasonable regard to the convenience and comfort of others and must not themselves expect a degree of convenience only obtainable by disregarding that of other people.

In London, Boris Johnson and TfL famously wants to “smooth the traffic flow”, meaning keeping motorised vehicles going at such a lick that gridlock is averted. Measures to tame motorised traffic are seen as a “war on the motorist”, as though motorists have greater rights to use roads. In law, they don’t.

Roads are for all, not just for those with engines.

7 thoughts on “Never mind the width, feel the lack of equality”