Automobiles existed in the 1890s but they were crude, dirty, expensive, hard to drive, and prone to mechanical breakdowns. The transportation revolution of the age was the bicycle. Eleven years after the introduction of JK Starley’s Rover Safety bicycle and about six or seven years after the widespread commercial availability of John Dunlop’s pneumatic tyres, there was an almighty boom in bicycle sales around the world, but most especially in England and America. The impact that automobiles would later have on people and on cities was foreshadowed by the incredible, wild popularity of bicycling. This is clear from reading the newspaper editorial below. It appeared, without a byline, in the New York Evening Post on Tuesday 2nd June 1896. It was soon repeated, slightly edited, in Scientific American, then in the mass-circulation weekly magazine of the League of American Wheelmen, and as extracts in newspapers around the US. I fancy I’ve also seen it quoted at length in the journal of Britain’s Cyclists’ Touring Club, probably from about September 1896, but will have to claw through my library research notes to find the mention.

It’s worthwhile stressing this article wasn’t from the bicycle section of the newspaper – most newspapers of the 1890s had such sections, much like the motoring pages in today’s newspapers – it was an editorial and was run on the same page as an op-ed about the financial calamities of the day, advising President McKinley on what he should be doing about the silver standard, a contemporary fixation.

The bicycle lobby was important in the 1890s: President McKinley had been helped into power by the League of American Wheelmen. In the 1896 presidential election campaign, the L.A.W. was the only organisation to have its own room in the campaign HQ of the Republican party. [Why Wheelmen? The most common name for ‘bicycle’ in the US at the end of the 19th Century was ‘wheel’: “I’m off to ride my wheel.”].

Quotes from the Evening Post article are still used as pithy bons mots today. While there are certainly many excellent quotations cullable from the piece (the last para is the one most seen) it’s very much worth reading the full article. Enjoy. 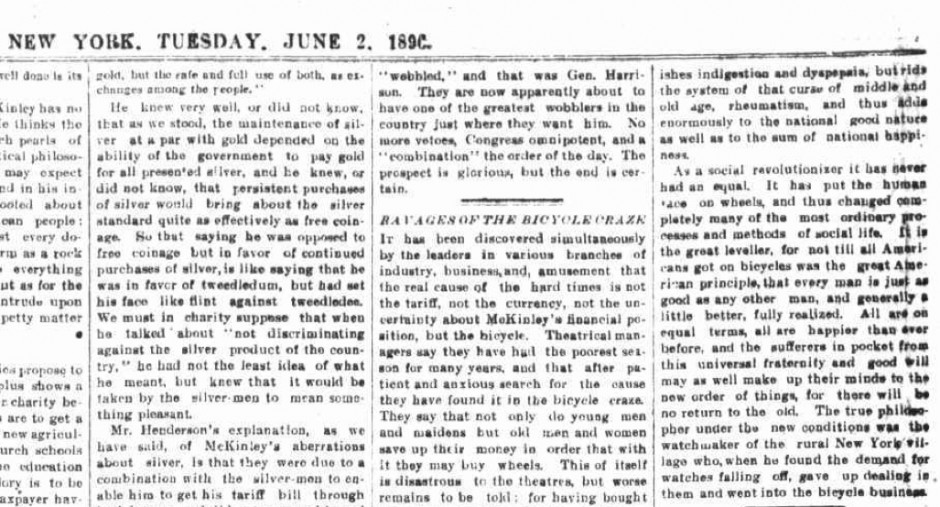 RAVAGES OF THE BICYCLE CRAZE

It has been discovered simultaneously by the leaders in various branches of industry, business and amusement that the real cause of the hard times is not the tariff, not the currency, not the uncertainty about McKinley’s financial position, but the bicycle. Theatrical managers say they have had the poorest season for many years, and that after patient and anxious search for the cause they have found it in the bicycle craze. They say that not only do young men and maidens but older men and women save up their money in order that with it they may buy wheels. This of itself is disastrous to the theatres, but worse remains to be told; for having bought the wheels they ride them in the evening instead of going to places of amusement. They ride also on Saturday afternoons, and in Chicago they ride so universally on Sundays that the theatres, which formerly gave successful performances on that day, have discontinued them. The Sabbatarian might find encouragement in this fact were it not true that the churches are suffering almost as severely as the theatres from the same cause.

Business men are as loud in their complaints as the theatre managers. The watchmakers and jewellers say they are nearly ruined; that all pin money which the young people saved formerly with which to buy watches and jewelry now goes for bicycles; that parents, instead of presenting a boy with a watch on his twenty-first birthday, now give him a bicycle, and that all the family economy is now conducted with the object of equipping every boy and girl, as well as father and mother, with a wheel. The confectioner cries “me too” to this complaint, declaring that about all the business he does is in chewing-gum, ice-cream, and soft drinks, while his candies find few customers. The tobacco manufacturer says he is the worst hit of all, since few riders care to smoke on the road – for which there is reason for profound gratitude – and the journals of the trade see it is a fact that the consumption of cigars is decreasing at the rate of a million a day, the total decrease since the craze became general averaging no less than 700,000,000 a year. Instead of sitting idle and smoking most of the day, hundreds of men now ride, and smoke only when they are resting.

The tailor, the hatter, the bookseller, the shoemaker, the horse-dealer, and the riding-master, all tell similar tales of woe. The tailor says that so many men go about half the time in cheap bicycle suits that they do not wear out their good clothes half as rapidly as formerly. The hatter says so many of them wear cheap caps, in which there is no profit to the maker, that their hats last them twice as long as heretofore. The shoemaker says he is even worse off, for while they buy cheap shoes for the bicycle, they do not even wear these out, and they refrain from walking much in any kind of shoes whatever, so that his loss is almost total. The bookseller says people who are rushing about on wheels, days, nights, and Sundays, no longer read anything, and his business has become practically worthless. As for the horse-dealer, stable-keeper, and riding-master, it is notorious what has happened to them. They are no longer “in it” and, like the horse, are a drug in the market. Even the saloon-keeper groans, for he says that while many riders drink beer, the number who take “soft drinks” is much the larger, while the number who take “hard drinks” is constantly diminishing, which must be the case in the pursuit of a pastime which cannot be followed with an unsteady head.

Who are the gainers? An indignant “American Hatter” writes to his trade journal that the only beneficiaries are the bicycle-manufacturers, “who invest in land and government bonds, and send their families to Europe, there to spend the money that should be distributed upon this side among our own people.” He thinks Congress should come to the rescue of the hat trade and “pass a law compelling every bicycle fiend to wear a felt hat and buy at least two a season.” McKinley will, in all probability, lend a willing ear to that proposition when he gets his millennium in operation. But there are other occupations than bicycle manufacturing which prosper. Butchers and grocers are said to be doing more business than ever because of the increased appetites and rejuvenated digestions which riding has caused, and the wayside tavern-keepers of the land have awaked from a sleep of half a century almost, to find prosperity once more rolling in at their doors.

But the greatest gainer of all is the American race. An eminent physician is quoted as saying that “not within 200 years has there been any one thing which has so benefitted mankind as the invention of the bicycle,” and that “thousands upon thousands of men and women, who till within a few years never got any outdoor exercise to speak of, are now devoting half their time to healthy recreation, are strengthening and developing their bodies, and are not only reaping benefit themselves, but are preparing the way for future generations which will be born of healthy parents.” There is no doubt about this. As a people the Americans have never taken sufficient outdoor exercise. We have been a nation of dyspeptics, simply because we did not take sufficient physical exercise to develop and strengthen our bodies. The bicycle is a wonderful builder up and purger of the system. It not only abolishes indigestion and dyspepsia, but rids the system of that curse of middle and old age, rheumatism, and thus adds enormously to the national good nature as well as to the sum of national happiness.

As a social revolutionizer it has never had an equal. It has put the human race on wheels, and thus changed completely many of the most ordinary processes and methods of social life. It is the great leveller, for not till all Americans got on bicycles was the great American principle, that every man is just as good as any other man, and generally a little better, fully realized. All are on equal terms, all are happier than ever before, and the sufferers in pocket from this universal fraternity and goodwill may make up their minds to the new order of things, for there will be no return to the old. The true philosopher under the new conditions was the watchmaker of the rural New York village who, when he found the demand for watches falling off, gave up dealing in them and went into the bicycle business.