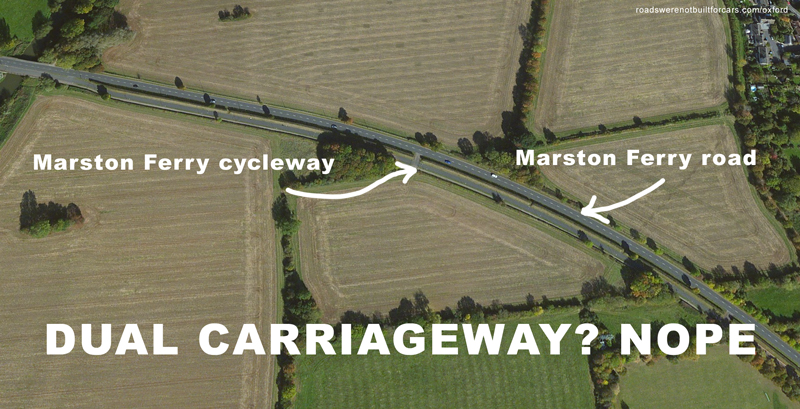 It’s good to look to the Netherlands for inspiration on how to embed cycling into our everyday lives but it’s also worthwhile pointing out that decent cycle infrastructure has been created in the UK, and by British road engineers. There’s Stevenage, of course, the Dutch-style cycleway-network-that-time-forgot, but there are other examples, too, such as Livingston in Scotland. Both Stevenage and Livingston were – are – veined with bike paths. However, as driving was as quick as cycling in these two towns, and certainly as convenient, locals chose to drive everywhere rather than cycle.

For cycle infrastructure to be well-used in the UK it will probably have to be built in places where cycle use is already high. No point throwing seeds on stony ground.

Cycle use in Oxford is far higher than the UK average (it’s normally stated as about 14 percent modal share for cycling but, as this map using data from the 2011 census shows, some areas of Oxford are seeing levels of 20-30 percent modal share by bicycle).

The website for Richard Mann’s Oxford-based transport planning consultancy Transport Paradise shows that Oxford’s (historically) high cycle use is not due to hard infrastructure. “Making space for walking, cycling and public transport is difficult in our congested cities,” argues Mann. “So we need a careful series of changes, giving roadspace effectively to walking, bikes and buses, and gradually reducing the space given to cars … Oxford … is the city with the most highly-developed bike and bus system in the UK. We know how that was done: it can be done in your city as well.”

Yet Oxford is far from a transport paradise. While it’s a world-famous university town it was also once famous for the Cowley car plant, built on the edge of town. (Why did Cowley start building cars? Because of bicycles, of course. The Cowley plant was created by William Morris, founder of Morris Motors. Like many other motor magnates he started his career by building and selling bicycles. He started his bicycle repair business while a teen still living at home and opened a bike shop in Oxford in 1901, adding another store a year later. He started making Morris cars in 1913.)

In 1966, and despite having a car factory in the town, 46 percent of Oxford households had no car. While post-war planners in Oxford were as car-fixated as elsewhere in the UK they also – sometimes – included cycling in their road plans.

One such road was the Marston Ferry Road. This was opened on 12th November 1971. It has an adjacent separated bike path, so wide it’s actually a third lane, more of a road than a path. A separate footpath was provided for pedestrians.

The Marston Ferry “relief road” crossed the river Cherwell and made obsolete the line-ferry from whence came the road’s name. The ferry was a favourite haunt of former poet laureate John Betjeman, who studied – badly – in Oxford in the 1920s. In his blank verse autobiography, Summoned by Bells, Betjeman wrote:

“Take me, my Centaur bike, down Linton Road…

And, with the Sturmey-Archer three-speed gear
Safely in bottom, resting from the race
We pedalled round the new-mown meadow-grass
By Marston Ferry with its punt and chain.

While he would be later applauded for his campaigns to save old buildings, especially Victorian ones, such as St Pancras station, the bicycle-riding Betjeman was at least partly responsible for some of the ravaging of the English countryside by “relief roads.”

His populist travel guides of English counties encouraged motorists to explore away from honey-pot towns and cities and out into the countryside. Produced by an off-shoot of the Dutch oil company, Shell, the Shell Guides were aimed at motorists. The first two in the series were written by Betjeman and published in 1934 and 1936.

The poet was sniffy about the target audience: “probably not an intellectual in search of regional architecture of the early 19th century but a plus-foured weekender who cannot tell a sham Tudor roadhouse from a Cotswold manor.”

The Shell Guides went on to become a major series of guidebooks, popular for many years, and responsible for many car journeys into the “unspoiled” countryside, including the countryside around Oxford.

With more and more Brits taking to the roads in an increasing number of private motorcars – forcing cyclists off the rural roads they had thought of as their own since the 1870s – planners and politicians provided more for cars than bikes, including in Oxford, although ‘King Car’ didn’t always get its own way. A plan to build an urban motorway into the centre of Oxford, obliterating the peace of the Christ Church Meadow, and hatched by Dr. Thomas Sharp in Oxford Replanned of 1948, was shelved in 1966 by the Ministry of Transport after opposition mounted during a public inquiry held in 1965.

In The Ecologist, in July 1971, journalist Helen Turner wrote: “Oxford, like most of our cities, is being ruined simply so that more and more motor cars can be accommodated. If this process goes on much longer it will become uninhabitable, as is rapidly becoming the case with most urban areas in the USA. It is time our Government realised that – regardless of the ingenuity of our planners – there is a limit to the number of cars that can be introduced into this small Island, and that this limit has probably been reached already.”

Turner’s article – ‘Has Oxford a future? A town menaced by the car’ – didn’t mention cycling as part of the solution to the town’s transport woes but it’s interesting that the Marston Ferry road was opened in the same year.

Hint: the wide cycle path is behind the hedge

The cycle path adjacent to this arterial road is a good one (so good it was the subject of this recent blog posting) but, of course, it doesn’t form part of a tight-grid of similar paths. Oxford has a curate’s egg cycle path network: good in parts. Despite the width of the Marston Ferry road cycle path, it ends all too soon and the cyclist is thrown back into the maelstrom of fast-moving motor vehicles. Nevertheless, Cherwell School – which is sited next to the cycleway – sees a great deal of cycle traffic in the mornings and afternoons. In fact, more than 60 percent of pupils cycle to and from school. And, for safety, the cycleway has recently been divided in two by a painted dotted line.

The Marston Ferry cycleway is an example of how British engineers have built arterial roads with adjacent high-quality cycle paths. The problem isn’t one of skills, it’s getting the cash and maintaining the political will to build a whole load of new cycleways.