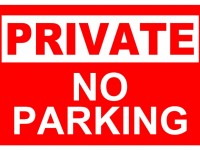 “Parking is now officially, in my book at least, one of the undisputed rip-offs of the decade.” He claims he will no longer pay for “heinously expensive spaces” and will be “refusing to drive or visit town centres and using out-of-town shopping centres instead.”

Rutherford, like many motorists, believes private property (cars) should be allowed to be stored on public infrastructure (roads) paid for not by motorists but by all tax payers. Many of those who live beside roads believe they have the absolute right to park outside their front door, even though such rights rarely exist.

This belief in the unalienable right to park, for free, anywhere where there’s not a double yellow line or a pay car park, is a strong one. And it’s relatively new.

Up until the 1920s, few people had cars and those that were owned were usually accommodated off the public highway when not in use. Cars were stabled, just as horses had been done before the advent of the ‘horseless carriage’. Now it’s difficult to get moved on many urban roads because they’re narrowed by parked cars, very often illegally parked cars, with two wheels on the part of the highway meant for pedestrians.

Such storage of private property on the public highway would have been unthinkable to previous generations, as was pointed by the brilliant economist Ralph Turvey – a professor at the LSE and economist for the World Bank and other organisations – in his classic treatise ‘Street Mud, Dust and Noise’ (London Journal 21, 1996).

“In the nineteenth century the streets were clear from kerb to kerb for the sweepers, water carts and broom machines to do their work in the small hours. Horses and carts or carriages were not left in the street at night, and when – a rare occurrence – unhorsed cabs were left all night on carriageways, the offenders were fined. Victorian London may have been smelly, dusty and muddy, but it had no parking problem.”

Bit by bit we have allowed private property to be dumped in public spaces, and most people don’t give this a second’s thought.

And it doesn’t have to be this way. In Japan, in order to own a car, you must prove that you have a off-street parking space. This parking certificate is called shako shoumei, named for the Shako Law, in force since 1958.

In the UK no such proof is required. We endure clogged streets, dangerous for pedestrians, cyclists and motorists, but this is seen as normal. It wasn’t normal in the past and it’s not normal in every other car-saturated nation.

With less parked cars blocking roads (and pavements), our towns and cities would be better places to live.