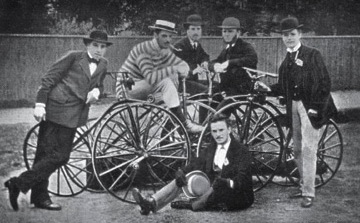 Today is the 200th anniversary of the birth of Charles Dickens. The great novelist was born on this day in 1812. On 9th June 1870, he died. Sadly, the old chap never got to ride a velocipede, which had arrived in London in 1869. None of Dickens’ characters rode bicycles but when six velocipedists from Hackney in London wanted a name for a club they had just formed, in the Downs Hotel on 22nd June, they landed upon Dickens. They could have chosen any of the author’s novels to name their new club but they chose Dickens’ first: the Pickwick Papers. 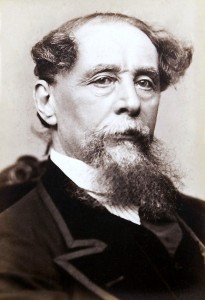 The Pickwick Bicycle Club was born. It’s the world’s oldest bicycle club and it’s also the world’s oldest extant Dickensian association. I’m a member. Club members – all men – are given sobriquets taken from characters in the Pickwick Papers. I’m Mr. Grundy. There are only a finite number of characters in the book so to become a member you go on seven-year waiting list and, when an unfortunate member shuffles off this mortal coil, in you jump. 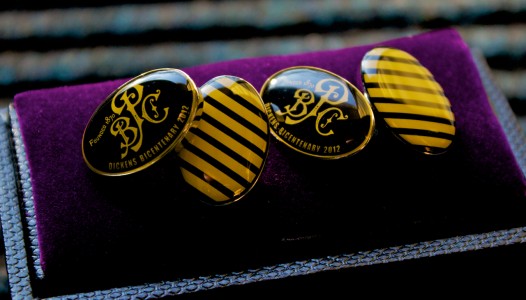 There are two main events each year: posh and ribald ‘luncheons’ in the 200-year old New Connaught Rooms, near Covent Garden. At the luncheons, members are called to order by trumpeters of the Grenadier Guards and Pickwickian punch is wheeled in by Chelsea pensioners while members sing the Boys of the Old Brigade. The great and good of the bicycle world go to these functions, from industry bigwigs to pro riders (I sat next to David Millar at a previous function). The Pickwick Bicycle Club also still organises bicycle rides, including an annual ride at Hampton Court. Members are encouraged to ride period bicycles.

This ride has a long history. The third ride took place on May 26th 1877, and was immortalised in the drawing below which appeared in the Illustrated London News. Fixed front wheel velocipedes could be made to go quicker by enlarging the front wheel: the high wheel bicycle was the result and can be seen at the front of procession of up to 2,000 riders. London and “provincial” clubs were well represented on the ride. There was a rider from Edinburgh and seven from Manchester. 69 of the riders were members of the Pickwick Bicycle Club, and the club’s Captain K.M. Yeoman was “put in command for the day.” Behind him were six marshals, one of which was a fellow Pickwickian. 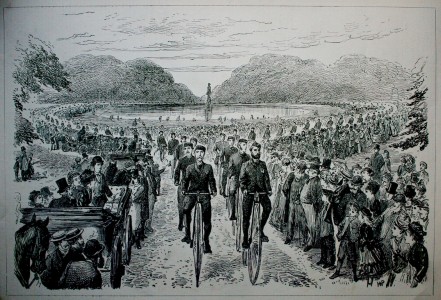 The clubs of the time were quasi-military in garb and manners: riders dressed in uniforms and followed commands issued via a bugler. One of the reasons for the uniforms and riding en masse was to discourage stone throwing from country-dwellers not used to seeing townsfolk on the long neglected turnpikes. Cyclists of the 1870s were the first users of rural roads since the demise of the stagecoach trade fifty years previously.

At the 1877 Hampton Court ride “each of the Marshals wore a scarlet sash,” reported the Illustrated London News.

“At half-past five o’clock the buglers sounded the advance. The Pickwick Club, which was first in order, immediately replied, and the men, mounting at once, came on in pairs in gallant style, amidst tremendous cheering…It took upwards of an hour for the regulars to file past, before the unattached riders brought up the rear. The procession was watched with much interest by H.R.H. Prince Christian and Colonel Maude, C.B., from the windows of the Greyhound Hotel.”

Those not attached to a club “acted in a spirit of insolent independence, and did much to upset the order which the marshals were taking so much pains to maintain.”

In an article in a CTC Yearbook from 1928 J Foxley Norris wrote “the usual runs in the early 1870s were about ten miles out, and a radius of 20 miles would well constitute a Sunday or weekend fixture. Such riding may seem trivial to the rider of 1928, but he will be reminded of the weight of the ‘boneshaker’ – 60lbs with its wooden wheels, iron tyres, and the villainous character of the road surfaces.”

The most notable former member – and club president in 1944 – was Lord Nuffield CBE who, as William Morris, founded the Morris Motor Co. Naturally, as with many motor magnates, Lord Nuffield had started out as a bicycle mechanic.

In the company of his fellow club members Lord Nuffield was known as Joseph Smiggers. Many of the early clubmen raced using only their assumed names.

The Boys’ Own Paper of 1889 reported that in “some old reports of race meetings, we find the name of the “Fat Boy” frequently mentioned. As may naturally be supposed, this name was appropriated by one of the thinnest of men.”